Merry Christmas from BakersfieldObserved: celebrating a year of living in Bako

* ... THE ALEXANDER GIRLS: John and  Kay Alexander emailed me to let me know that their three girls - Victoria, Elizabeth, and Kathryn - all graduated from Highland High, Bakersfield College, and UC San Diego.After a post-law school stint in Washington, D.C., Victoria returned to Bakersfield to work for Clifford and Brown, LLC, and married John Trichell of the W.A. Thompson Trichells. Elizabeth deferred an acceptance to UOP Dental School to teach biology at Foothill High, where she met her future husband, Gavin Bell, a Garces grad. Kathryn, who teaches social science at West High, also married a local boy, Zak Karlen, who is a director at Bolthouse Farms. As they told me: "Lucky us: we see our children and grandchildren almost daily. Thank you for letting me add my two--or three--cent's worth."

* ... SAVING FOR COLLEGE: Lost amid the holiday shuffle was a news release from state Treasurer Bill Lockyer urging families to open a California Scholarshare account to start a college savings program for their children or grand children. This state sponsored 529 savings account allows folks to put money away after tax and watch it grow tax free. Fidelity manages the investments. If you are a parent or a grand parent, there isn't a better gift for the children in your life to give them the gift of a college education.

* ... BAKO OR BAKERSFIED? Reader Darlyn Baker offered a little poem for the debate over using the term "Bako" for Bakersfield. Here's her take: "Bakersfield vs. Bako in your column is fine. Bakersfield is too long. Bako saves time. Embarrassment is not the intent nor pun. When using Bako, to me it sounds like fun."

An anonymous reader was not so kind, remarking: "The term Bako instead of Bakersfield is a reflection on the person(s) who use it, and they probably use terms like Frisco and dude and 'I'm like' quite a bit.  I think that it is an ugly term.  It is the same as saying a woman is a 'babe' as opposed to saying she is an attractive woman .. and that's my two cents!"

* ... RIP JAN JAY:  Was saddened to hear about the death Christmas Eve of Jan Jay, wife of Bruce Jay, the president and CEO of Valley Republic Bank. Jan had been in hospice care for several weeks while suffering from cancer. Keep her family in your thoughts. She had worked for years in the pediatric dental practice of Dr.  Daniel Launspach in town.

* ... THE BUZZ: It was exactly a year ago that I started BakersfieldObserved as an online blog, hoping to catch some of the spirit of our community by recognizing people who work quietly to improve our town. I am most grateful to the hundreds of people who have responded and emailed, even when they don't agree with me. The themes that seem to resonate most are those that go to the heart of our self esteem: local kids who came back home when they could have lived elsewhere, nicknames for the town, and how others perceive us. Thanks to Johnny Carson and Hollywood's depiction of the Central Valley, we clearly are a tad defensive about how others view us, but one can't deny the basic goodness of the people who call Bakersfield home and work every day to improve our community. I dedicate this blog to them. Merry Christmas and happy holidays to those of other faiths.

Posted by Richard Beene at 9:29 AM No comments:

* ... BAKO SALARIES RISING: It was nice to see that Bakersfield made the list of cities where salaries are rising the fastest. This comes despite our high unemployment (north of 15 percent by most measures) and lower demographics. The survey by Forbes (read the story here) says our success can be attributed to the oil and gas industry and the need for engineers, of which there are plenty in Bakersfield and Kern County. One excerpt from the piece:

"In fact, soaring unemployment rates did little to deter leading contenders from the top ranks. The second-best metropolitan area, Bakersfield, Calif., has an unemployment rate of 14.5 percent. However, the lucrative engineering profession has a strong presence there, along with the oil and gas extraction industries. These niches have provided a nice cushion for employees, particularly highly skilled workers and recent college grads with degrees in engineering."


* ... DOWNTOWN CLEANUP: We take it for granted now, but it's a pleasure to see the clean up and revitalization of parts of central Bakersfield. I've lived here long enough to remember when this part of town was a scary mess, but the area (most of it anyway) is now a tribute to revitalization and renewal. I'm speaking of the zone from Truxtun to California Avenue and from N Street to S Street, including the Rabobank Arena and convention center, the new Maya theaters, the ice rink and McMurtrey Aquatic  Center, the Convention snd Visitors Bureau, Amtrak Station, Marriott Hotel and the one that started it all, the Beale Library.  There are still some pockets to go, but it's a big improvement. Now if the core "downtown" business district area can continue its progress, we'll be in even better shape. Kudos to all involved.

* ... FRESNO BULLDOG COMES HOME: I heard from the parents of Allison Brandt Oliver,  who graduated from West High and Cal State University Fresno with a degree in construction management, that she returned to Bakersfield to work with her father Bob, building custom homes with Brandt Homes.

* ... BAKO OR BAKERSFIELD? Reader Caroline O. Reid weighs in on the debate over the use of the  term Bako to describe our city. She doesn't like it, and agrees with contributor Sharon Milton that it's an insult. In her words: "I agree with Sharon. It's a little too 'text messagee' for newsprint. I've also thought it unprofessional and insulting. You asked. You got!"

On the other hand, Patti Imes wrote to say Bako is "just fine" with Patti and  her girl friends and they have been using it for years. She added: "Just keep in mind that us girls did not actually make up the term Bako. I'm sure we must have picked it up along the way from the good ole' boys, ie. Cousin Herb, Merle Haggard, Buck, etc. as in 'Good ol' Bako'. You might mention that it's better than living in Toad Suck, Arkansas." 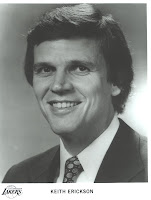 * ... THE BUZZ:  I heard that Keith Erickson, one of the great players for the UCLA championship basketball teams and later the Los Angeles Lakers, will give the keynote address at the annual Bakersfield Prayer Breakfast on January 28 at 6:45 a.m.  Erickson played for the the legendary Bruin coach John Wooden when UCLA won the NCAA title in 1964 and 1965. He is now a motivational speaker.
Posted by Richard Beene at 10:41 AM 3 comments:

Bako or Bakersfield? One person's insult is another's endearment

* ... MATH TUTOR BECOMES DEAN: I was delighted to hear from Lee Webb, professor emeritus of math at CSUB who wrote to give me an update on his daughter, Tamara. I have my own connection with his impressive daughter: she tutored my younger daughter in math, well enough that Hannah went on to University of Michigan in no small part due to Tamara's coaching. Tamara went to Cal Poly in Fall 2000, spent a year there, but missed Bakersfield and her boy friend A.J. Clark. So she returned to CSUB, finished a double major in political science and kinesiology, minoring in math, and started teaching math at BHS in 2004. This is her sixth year at BHS, she married her high school sweetheart, finished two master's degrees, and earned her administrative credential at CSUB. She was the head swim coach at BHS, but relinquished that position and the mathematics teaching position this year to become Dean of Instruction at BHS.  Her husband, A.J. graduated from BHS, attended BC for two years, finished his bachelor's and master's in public administration at CSUB, and is an engineer for the Bakersfield City Fire Department. As the proud dad Lee said: "AJ and Tamara love Bakersfield and will more than likely finish both of their careers in this family friendly town." Now that's a happy ending.

* ... AN ENGINEER FROM GATECH: I also heard the other day that Nikki Erickson, a local Stockdale High graduate whose parents have since moved to North Carolina, graduated from Georgia Tech this year. Nikki is the daughter of Bob and Carole Erickson, formerly of Southwest Bakersfield. Bob was a Georgia Tech engineering alumni and Nikki  followed in his footsteps.

* ... BAKO OR BAKERSFIELD: I received a lot of good spirited feedback on whether referring to our community as "Bako" was in any way derogatory. I will occasionally run some of the responses, but here is  local resident Joel Young weighing in: "There is nothing disrespectful about using Bako. I've definitely heard worse: Bakershole and Bakerspatch for example. I think of Bakersfield as the poor little ugly dog that grows on you over time and becomes cute. What better nickname to give that dog than Bako?"

And Jan Hefner wrote: "Hi Richard. I love the term Bako and use it often, and I'm a Bako native. My first recollection of hearing the term was when the original Great American Melodrama theatre came to town in the early 80s. That Melodrama has its first location in Oceano and most of the actors at the start had worked in Oceano before moving to Bakersfield. The actors started using the term Bako for short hand when talking about the two towns - Oceano and Bako."

* ... THE BUZZ: I heard that Mike Allen, longtime head of the Spanish Radio Group in town, is leaving the company after almost 33 years. Mike is one of the most well known local radio managers in town and an aggressive competitor but apparently lost out in a companywide shakeup. Mike told me he plans on sticking around in town and exploring other opportunities. Something tells me we haven't heard the last of him. The stations Mike managed include KIWI, KWAC, KPSL and KCHJ.