The victim of the downtown stabbing was an aspiring Hell's Angel, Jennifer Self lands a gig at CSUB and Cafe Smitten celebrates two years in business

* ... DOWNTOWN STABBING: Does it surprise you to learn that the victim of a brutal murder last weekend was an aspiring member of the Hell's Angels motorcycle gang? That's the word from

authorities about Michael Adam Morales, the 32-year-old man who was stabbed to death and left for dead in the middle of Eye Street in front of Mama Roomba restaurant last weekend. Speaking of Mama Roomba, I was there a couple days ago and an employee told me that after the 9 p.m. stabbing, police roped off the area and would not allow anyone to move their cars until 3:30 a.m. It is not certain where the altercation started, either in Guthrie's Alley Cat or in the Wall Street alley. 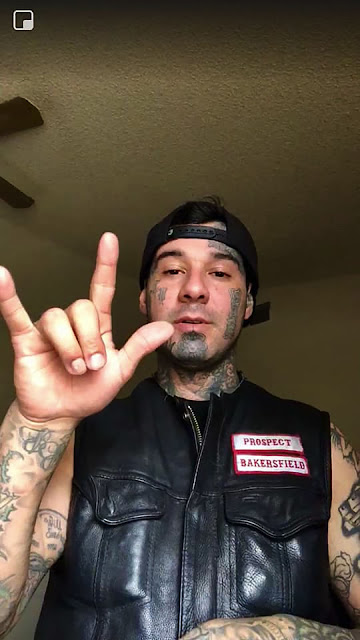 * ... JUSSIE SMOLLETT: The weirdest story of the month has to be the story of Jussie Smollett, the Empire actor who staged an attack on himself and blamed it on Trump supporters and white supremacist. Chicago police say he staged the whole thing, and now he faces jail time for his misdeeds. What does Minority Leader Kevin McCarthy think about the whole mess? "I need he needs help," McCarthy told me. "He may have some mental problems." That seems an understatement. Stay tuned. 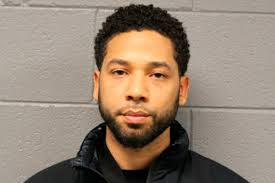 * ... CSUB HIRE: Congratulations to Jennifer Self, a lifelong journalist who has been named director of public affairs and communications in University Advancement at CSU Bakersfield. Born and raised in Bakersfield, Self worked for 30 years as a reporter and editor at The Bakersfield Californian before leaving to join Clinica Sierra Vista in public relations. Self joined CSUB at a pivotal time for the university with the arrival of president Lynnette Zelezny in July and CSUB's yearlong 50th anniversary celebration coming in 2020. She will report to Victor Martin, VP of University Advancement 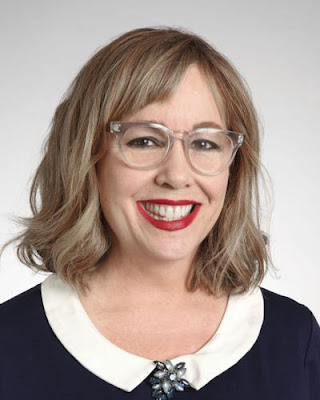 * ... LOCAL EATS: Did you see that Goose Loonies is looking to open a second branch over off Truxton Avenue where the old salad bar was once located? And hats off to Cafe Smitten, the popular deli and coffee bar on 18th Street that is celebrating its two year anniversary of being in business. 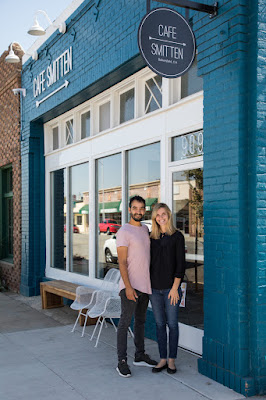 * ... SPOTTED ON TWITTER: "'Do what you love' is shitty career advice because mostly what I love is spending time alone and eating breakfast food."

* ... MAC 'N CHEESE: Get ready for the Mac 'n Cheese Festival, arguably our town's most popular and successful outdoor event featuring dozens of variations of macaroni and cheese, beer and wine. The event is scheduled for Saturday, April 20, at CSUB. Earlybird tickets are now on sale. 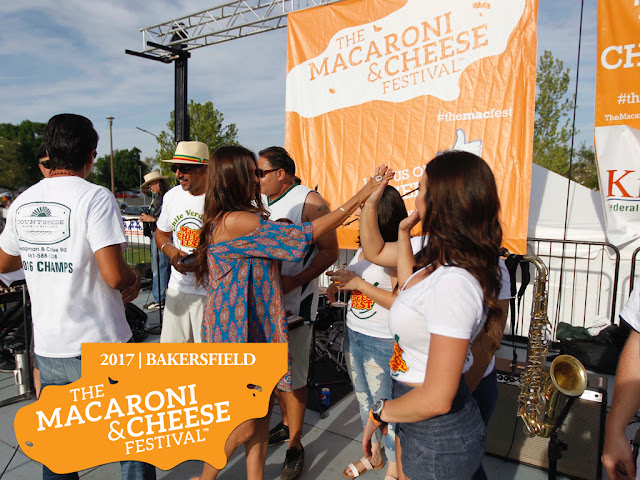 * ... MEMORIES: Check out this old, colorized photo of our city's founder, Col. Thomas Baker, and his wife. 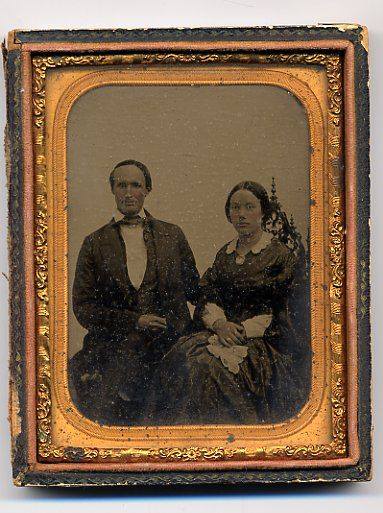 Posted by Richard Beene at 3:51 PM No comments:

Water returns to the Kern River through town, a stabbing death downtown and a horrific crash in Delano leaves five people dead

* ... KERN RIVER: Did you notice the water in the Kern River this weekend? Apparently we can thank the West Kern Water District which was involved in a deal that sent water to a county water

agency, which released it into the river as part of a plan to use some otherwise dry canals. Enjoy it while we can folks because it never lasts long. 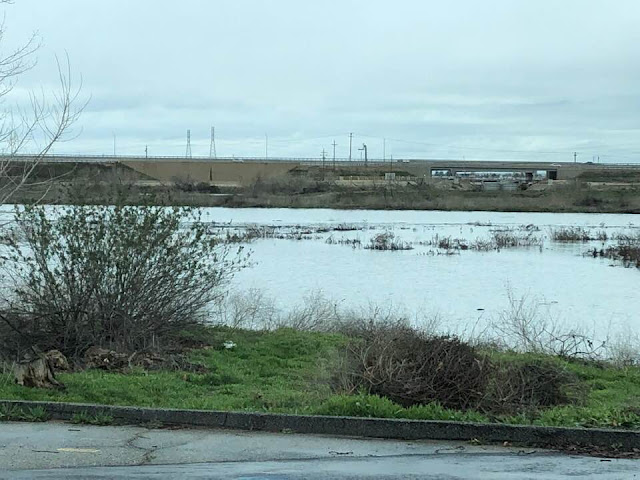 * ... STABBING DEATH: There was a stabbing death downtown Saturday evening, the first such incident downtown in a long time. Details are sketchy but apparently there was a fight in the alley that spilled out onto Eye Street near Mama Roomb'a's restaurant and Guthrie's Alleycat. A witness said the victim was a young man and he died at the scene. (photo courtesy of The Californian) 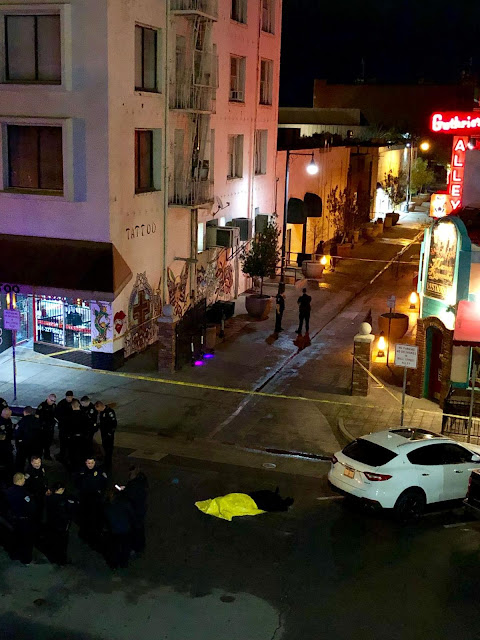 * ... DELANO CRASH: There was a horrible wreck in Delano Saturday that left five people dead, including two children. The Highway Patrol said an SUV hit a tree on Highway 99 just south of Highway 155. The names of the victims were not immediately released, but the SUV was registered in Delano, according to the CHP. The accident happened on the northbound side of the freeway at about 5:05 p.m. (photo courtesy of KGET) 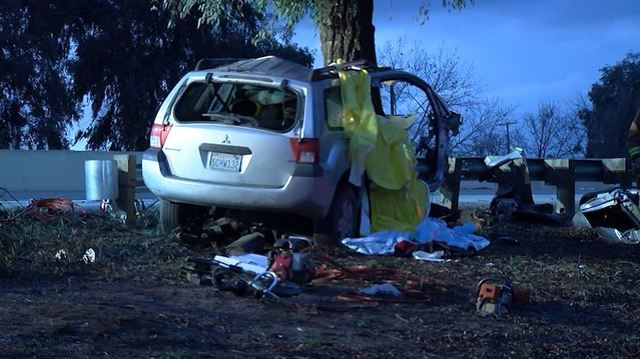 * ... MEASURE N TAX: Social media is good for a lot of things, but certainly not for a sober examination of politics. Rather, it's populated with wild rants, partial truths and outright lies. Take for example the reaction to City Manager Alan Tandy saying in The Californian that part of the $50 million raised from the Measure N tax would go to pay down the pension deficit, and by making one lump sum annual payment, the city will save millions in interest. Almost immediately, social media lit up with people claiming that Tandy lied to get the measure passed. But hold on. Tandy was crystal clear, on my radio show and others, that a portion of the Measure N money would be used for this exact purpose. So in fairness to our city manager, he was consistent in saying some of the money would be earmarked for pension obligations.

* ... SPOTTED ON TWITTER: "I talk dirtier in traffic than I do during sex."

* ... MEMORIES: Check out this colorized version of an old post card from back in the day.