It looks like we will be skiing on Mammoth Mountain through July thanks to a heavy snowpack, The Mark to roll out a new menu and clearing up the story of Vincent Clerou and the land speed record on a bicycle

* ... MAMMOTH: I heard some good news the other day from a friend who attended an economic summit in Reno, Nevada. During a breakout session on the effects of the seasonal snowfall, there was this good

news from a climatologist:  "They are predicting we will be skiing at Mammoth through July Fourth." And, the same may be true for the closer to home Alta Sierra resort, where friends told me the snow is plentiful and the skiing spectacular. What a change from just a few years ago. 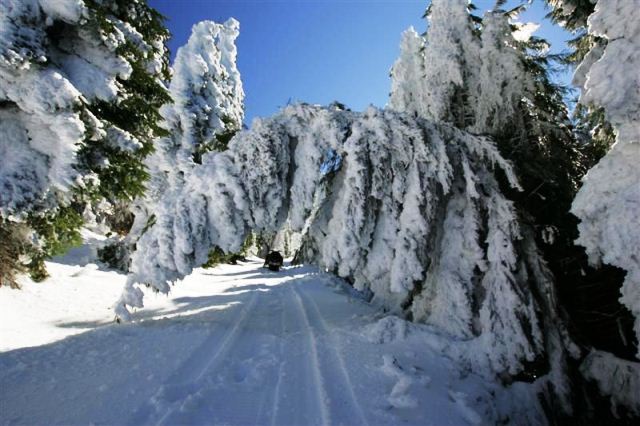 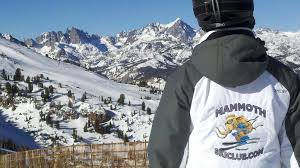 * ... SPOTTED ON TWITTER: "How many boxes of these Thin Mints do I have to eat before I start to see results?"

* ... THE MARK: Expect some big changes at The Mark downtown which will be rolling out a new menu over the next several weeks. Jeramy Brown, who proved his flair for the culinary dramatic over at Valentien's, is now running The Mark and will be putting his own personal touch on both the bar and more formal dining room. 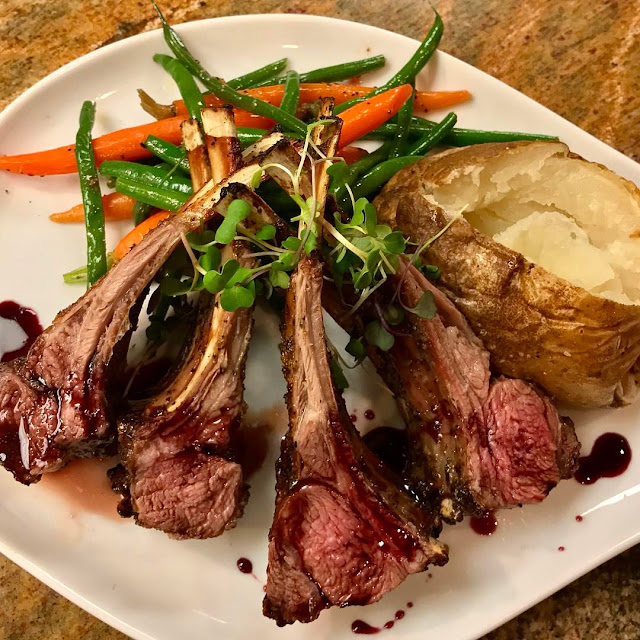 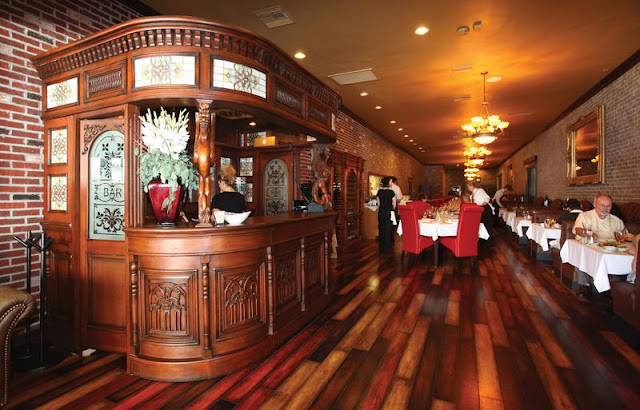 * ... PET LAND: Michael McGlasson wrote to weigh in on the old Thompsonss Pet Land, which he says was located on 19th and N street. Prior to the 1952 earthquake, he said that building was the Greyhound bus depot. "The buses had a covered drive through on the west side from the alley to 19th Street. One building to the east was Tourist Garage and they did maintenance on those buses.
After the earthquake many bricks were salvaged from Tourist garage by anyone who wanted to haul them off. I helped my father doing this and still have some in use."

* ... VINCE CLEROU: Let's finally set the record straight about the time Vincent Clerou sponsored the land speed record on a bicycle in town. This note from his daughter Romaine Catherine Clerou says it all: "Just for the record, my father, Vincent Clerou, would want the facts given about the land speed record of Alfred Letourneur. My father organized the event. In a pictorial advertisement for Santa Barbara Savings, he tells about the event. According to my father, 'Then in 1941, under the sponsorship of Schwinn, I arranged an attempt at the bicycle land speed record. We built a windscreen on the back of Ronney Householder's midget racer and brought over French 6-day
marathon cyclist Alfred Letourneur. On a long stretch of Highway 99, south of town
we broke the record at 108.92 miles per hour." My father told many times he arranged with the California Highway Patrol to shut down that section of Highway 99 for that race record." 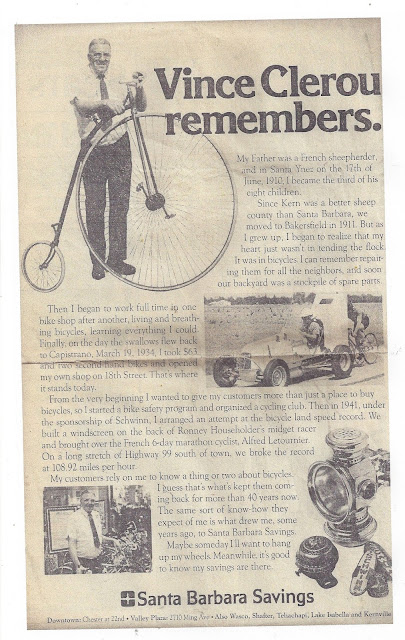 * ... MORE CLEROU: Henry DeSimas worked at Vincent's Cyclery during the 1980s and fondly recalled those days when "I was fortunate to work in a place alongside of people like bike mechanic and former six day racer Charlie Morton, who also by the way was the captain of the US cycling team at the 1936 Berlin Olympics! Not to mention his amazing collection of antique bicycles going back to the big high wheelers that I tried and failed to handle, I guess that's why they call the modern double diamond style the 'safety bike.' As Paul Harvey would say, 'now you know the rest of the story.'"

* ... MEMORIES: Nancy Bryant wrote to recall the days when she was a child and "there were photographers on the corner of 19th and Chester who would take random pictures of people, and then ask if you wanted to buy them. If so, you would pay a small fee, and the pictures would be mailed to you. I have half a dozen or so great pictures of members of my family, me included, walking on 19th Street in the late 1940s and early 1950s."

Posted by Richard Beene at 7:17 AM No comments:

More bad news on crime around town, some hot new eateries cluster on California Avenue and we will put a spotlight on the sleep aid Ambien this Friday on The Richard Beene Show

* ... CRIME: How many people do you know who have been touched by crime recently? It's

rampant all across town as petty criminals fresh from being released from prison spread out across our community. The other day, I learned the step father of a friend had died and within days, his house had been burglarized, cleaned out of valuables and trashed. That's right, it wasn't enough to take the flat screen television and assorted electronics but they went through the house throwing porcelain collectibles against the walls and wreaking havoc.

* ... GOOD FORM: Here is an anonymous shout-out to a school crossing guard who makes sure all students arrive safely: "I normally avoid all school zones, particularly at drop off and pick up time. Too hectic and crazy. My one exception is driving past Endeavour Elementary on Meacham Road. The main crossing guard handles children, parents and vehicles with aplomb. He always has a friendly smile. No problem at all driving through that bottleneck thanks to his excellent skills. Signed 'smiling lady in white pickup truck.'"

* ... SPOTTED ON TWITTER: "Fact: If you report for work from 9 to 5 but just hide in the bathroom all day, by law they have to keep on paying you."

* .. HOPE: Amid all the post inauguration vitriol and protests, I found a bit of solace (and hope) when I gazed out my back window and saw my camellias for beginning to bloom. These camellias, planted when my downtown home was built in 1934, are my steady symbol of hope, new beginnings and reconciliation. 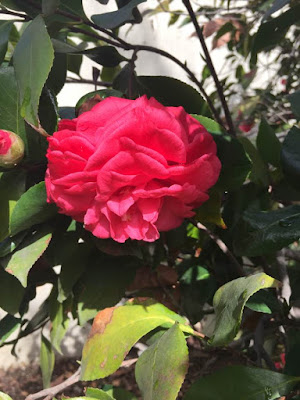 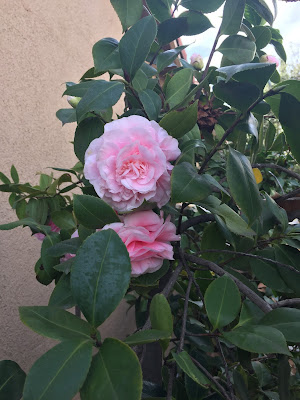 * ... GOOD EATS: One of the best corners for good in town is the new shopping center on California and Easton Drive where - for you old timers - Three-Way Chevrolet used to stand. It is now home to the Habit Burger, Rubio's Coastal Grill, Starbucks, the Corner Bakery and Blaze Pizza. In typical Bakersfield fashion there aren't enough parking spaces but the food is worth the search. 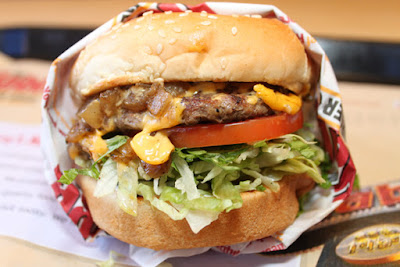 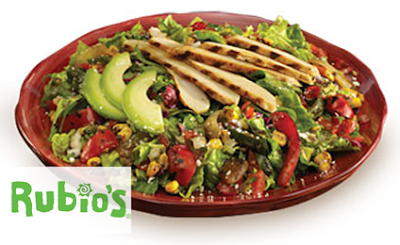 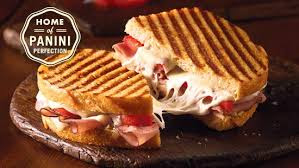 * ... AMBIEN: There has been a lot of talk recently speculating that a bad reaction to the sleep aid Ambien may have contributed to the suicide of City Councilman Jeff Tkac. Do you take Ambien? Do you know people who do? Have you read the horror stories about how some of the adverse reactions to taking the drug (driving at night and binging on food and not remembering a thing)? On Friday, I will interview Dr. Raj Patel of Preferred Family Physicians to have an honest conversation about Ambien, its benefits and dangers, on The Richard Beene Show on KERN NewsTalk 1180 AM/96.1 FM from 1 p.m. to 3 p.m. 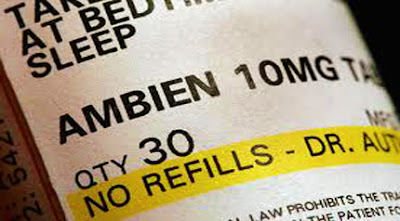 * ... VINCE CLEROU: Here's some more background on that land speed record that a cyclist set back in 1941 here in Bakersfield, courtesy of local Realtor Robin Ablin: "I believe there is an exhibit at the Home Depot Center Velodrome in Carson which includes the custom Schwinn Paramount bicycle used by French pro cyclist Alfred Letourneur on May 17, 1941, out by Buena Vista Lake somewhere, and photos and plaque describing the event. Yes, Vincent Clerou was very involved. I think he was the primary organizer. Vince was a big Schwinn dealer, and very active in racing. I believe Charley Morton was also involved - he worked for Vince - and was a member of the 1936 Olympic road cycling team, and was also a professional six day racer. I think they actually boarded over several miles of railroad track southwest of town which the car and bike road on."

Posted by Richard Beene at 8:06 AM No comments: