* ... KBAK: The sale of KBAK (channel 29) to Sinclair Broadcast Group means all three local TV stations have changed hands in the past year. The Baltimore-based Sinclair group won a bidding war to buy Fisher Communications, which has been quietly marketing its stations for several months. In the past year, market leader KGET 17 was sold to Nexstar Communications and KERO 23 was sold to
the Scripps TV group. No word on what this will mean for KBAK and its FOX 58 affiliate and their staffs. 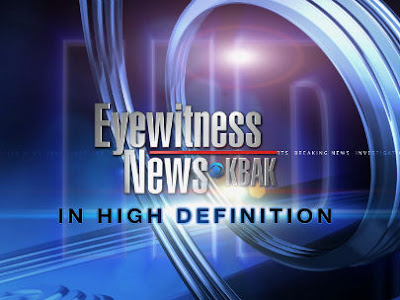 * ... TRASH: More musings on our litter problem, this thought compliments of Susan Chaidez.   "Many people don’t have the time, vehicle  or money to drive to the dump to take care of their trash.  Dumping it in a business dumpster is illegal. Why doesn’t the city or county station large dumpsters (like recycle dumpsters) in particular areas that are affected by this? ... The only way to stop the freeway trash is for a CHP officer to catch the offender who has uncovered trash while driving down the highway at 70 miles per hour.  But if it happened a few times and those people were required to pick up trash on a Saturday in lieu of a fine it would be a deterrent and a win-win fix. I recently witnessed a gardener 'blow' trash from a yard he was tending into the street far enough away that I know he wasn’t going to pick it up. This issue is everyone’s problem, it looks terrible and reflects on us as a community. We are better than this!"

* ... EAST: Rick Van Horne, a local teacher and a board member with the Bakersfield City School District, wrote to say that Pat Patterson made an appearance at the recent 75th anniversary committee meeting for East High School. "Pat, who was a longtime counselor at Bakersfield High, was a freshman on opening day at East High in 1938," he said. "She was also the very first freshman class president of East High."

* ... MOVING ON: Congratulations to Doug Collins, a 2002 graduate of Stockdale High School and California Baptist University who is now director of students (youth pastor) at Pathways Church in Redlands. His proud mother, Laurie Collins of the Kern Council of Goverments, said he proposed to his girlfriend Anna Hickey during Christmas and is getting married in the Lodi area on August 17. "We are so proud of him and so glad God answers prayers and directs lives," she said.

* ... MEMORY: From reader Joe Chavez: "Remember Richard's toy store? And the stamp and coin shop on Baker Street? I used to go to there after a Saturday show at the Tejon Theater to buy an Aurora model kit monsters or sci fi spaceships... This was a awesome time in the mid 1960s. Is there any one out there who has pictures of these long gone places? Either outside shots, or indoor?"

* ... MORE MEMORIES: And Dennis Claxton added this: "I think that the Brundage Variety Store was first opened as Fiddlers Variety (I may have misspelled the name). I grew up on Cypress and remember going in there to buy candy ... also our dad worked at Golden Crust bread. He delivered bread to Taft., Maricopa and Ford City... I would go with my dad every summer for a week and load his truck and smell the bread and ride with him on his route and he would pay me $10."

* ...  BAKERSFIELDISM: You are really a Bakersfield old timer if you remember when the "east side students of the one high school (KCUHS) caught the street car at Baker and Sumner to 19th Street, then west to F Street and south to the high school." Thanks to Jack M. Rademacher for that one.
Posted by Richard Beene at 2:41 PM 1 comment:

One woman volunteers to pick up trash and finds abandoned cats, a stray dog, dead fighting roosters and more trash and litter than one can believe

* ... TRASH: Jennifer Waguespack is one of those good citizens who joins with others to help clear the trash and debris from our community, but this note from her was a distressing one. "This has been a disappointing week," she wrote. "First, we found two dumped cats and one pit bull at the Alfred  Harrell Highway and Goodmanville Road underpass. Then on Sunday I (and my reluctant 13 year old daughter) picked up trash under the Fairfax and Alfred Harrell Highway bridge. Needless to say after three large trash bags full and numerous boxes later it looks better but not perfect. There is still a little trash, but also several dead roosters. Yes, thatʼs right dead roosters. I assume they are from cock fighting, or they are dumped in plastic bags under the bridge. Also we found a lot of used energy gel (GU) packets. Given that this is popular route for bicyclists and that cyclists are common energy gel users, I have to assume that they are the cyclists. 'Sharing the road' apparently does not apply to cyclists. Keep your trash in your car or in your back pocket if your on your bike and stop dumping your animals. Love your neighbors.":

* ... GRAPEVINE: Remember when the skies were so clear you could see the lights up the Grapevine  from your house. Well, reader Roberta Bollard say on certain days, you still can. "We see them at about 6:15 almost every winter morning as we walk south down Loma Linda Avenue past the Garces parking lot gate (at La Colina Avenue) and the side of Our Lady of Perpetual Help school.  Because the trees in the distance have grown taller over the years there aren't as many places along that route where you can see them now, alas -- but they're there, and you can see them clearly as long as there's no cloud cover. "

* ... MASSEY: Candi Easter, head of the Kern County Democratic Party, wonders if anyone remembers her great aunt, local artist Joyce Massey. Massey was an artist in Bakersfield in the 1940s and 1950s who taught art in in Bakersfield. "I visited here (as a child) in 1956 or 1957 for her 'one woman art show at the Bakersfield Art Museum in Central Park.  My dad (who is 91) and I would love to hear if there is anyone that remembers her."

* ... MEMORIES: Pam Roberts, one of the volunteers who works the annual SPCA book sale, wrote to ask if anyone remembers the old Brundage Variety store. "It was located on Brundage and I think around Cypress or Myrtle. I used to buy all my books there when I was a kid—Trixie Belden, Nancy Drew, Little House on the Prairie and the Bobbsey Twins and my paper dolls. Lots of memories in that store."

* ... NUN RUN: I goofed in saying the annual Nun Run is this Saturday. The annual event, to benefit Our Lady of Guadalupe School, will kick off at 10 a.m. on Saturday, April 20, on East California Avenue.

* ... BAKERSFIELDISM: You may be a Bakersfield old timer if you "ate lunch at the House of Rasmussen Restaurant on Niles Street." Thanks to Gene Bonas for that nugget.

Posted by Richard Beene at 5:51 AM No comments:

Monsignor Michael Braun gets some recognition and who remembers the jingle for the long departed Golden Crust Bread?

* ... BRAUN: Hats off to Monsignor Michael Braun, who was recognized as a 2013 Distinguished Pastor by the National Catholic Educational Association (NCEA). Braun was among 12 pastors who were honored at a special ceremony in Houston last week. Our Lady of Perpetual Help school board President Elaine Jamison called Braun "the mortar and bricks that hold our foundation together and assure its future." 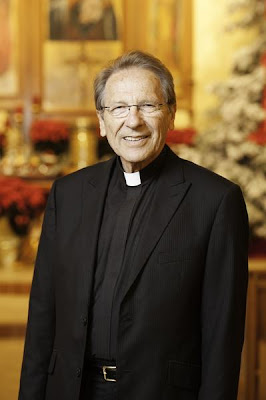 * ... DOWNTOWN: Another new tenant is joining the growing mix of businesses at the Shops at 1612 (formerly the Hay Building) on 19th Street in the heart of the arts district. Frosting Ink, which is currently behind the down U.S. Post Office, is moving to the Eye Street side of 1612. The shop owned by Sheila Heninger offers cupcakes, cookies, candy and various other sweet items. She hopes to be open by May.

* ... ON THE MOVE: More local kids moving up and away. Carl J. Nicita Jr., son of Carl and Beverly Nicita, has been named Deputy Director of the Mayor's Office of Neighborhood Services for the City (and County) of San Francisco. CJ, as he is known, was born in Bakersfield and graduated from Ridgeview High School in 2005. He obtained an associates degree from Santa Monica College and finished with a bachelor's degree in political science from San Francisco State University.

* ... MORE BREAD: Another reader, local accountant Fred Misono, had a slightly different version of the jingle but he also recalls school field trips to the local bakery. "Free samples of the fresh bread right out of the ovens and a miniature wrapped and labeled loaf to take home. Quite a treat and a treasure.  Never got the chance to test it out with Uncle Harry, Zippy the Clown or sponsor Uncle Woody Bryant, owner of the Toy Circus. Thanks for the memories of a simpler time... bizarre how certain things stick in the old noggin."

* ... CIOPPINO: It was another successful Cioppino Feed this weekend put on by the West Rotary Foundation over at Garces Memorial High School. This is the West club's signature fund raising event and normally draws a sold out crowd, but this year a few dozen tickets went unsold. Among those I spotted were Jim and Nona Darling, John Pryor, Greg and Mary Bynum, John and Ginette Brock, John and Karen Wells, David Jensen, Rick Kreiser, Mike Rubiy, Tracy Walker-Kiser and Brian Kiser, David and Debby Cohn and so many others.

* ... NUN RUN: Make sure you check out the annual Nun Run this Saturday over at the Our Lady of Guadalupe School. It's the 17th annual fund raiser and will begin at 10 a.m. with the closing of East California Avenue, in both direction, between Union Avenue and Baker Street for an hour. There will be food, games, crafts and music and of course the popular People's Choice Chili Verde Cook Off. This is one fund raiser that is worth supporting.