Local West Point graduate is gravely wounded in a suicide attack in Afghanistan and Bakersfield gets ready for the city's most celebrated cooking show, Savor Bakersfield

* ... VAN KOPP: My heart goes out to the family of Samuel Van Kopp, a standout graduate of Bakersfield High School who has been gravely wounded in Afghanistan. His father, local veterinarian Cliff Van Kopp, says his son was hit by shrapnel when a suicide bomber detonated a bomb. Friends say Samuel is the classic high achiever: No. 10 in his class where he excelled at debate and forensics, and on to West Point along with other bright men and women. His Facebook page is testimony to youth, hope, love, friendship and promise. Keep this family in your thoughts. (photos from Van Kopp's Facebook page) 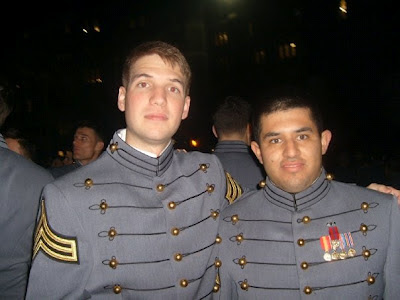 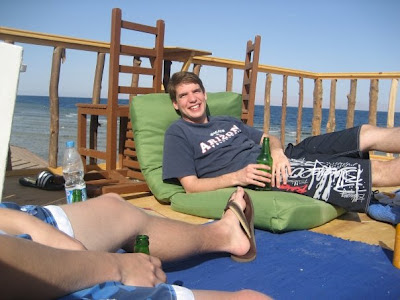 * ... COOKING SHOW: Our town's most celebrated cooking show - Savor Bakersfield - is coming up on Tuesday, November 13, at Rabobank Arena. This is always a hugely popular event that features boutique shopping, local food and an unforgettable cooking show featuring Dash magazine chef Jon Ashton. There will be food from more than 10 local restaurants including The Padre Hotel, Chef's Choice Noodle Bar,  Johnny Rockets, the Red Pepper, Prime Cut, the Garden Spot and others. Tickets are just $20 (there are discounts for early registration) and there will be raffle drawings throughout the show, including a grand prize of a Kenmore Elite refrigerator freezer. Tickets are available at Rabobank or by phone at (800) 745-3000 and at ticketmaster.com. Sponsors include Smart and Final and 3-Way Chevrolet.

* ... LARRY CARR: The annual Larry Carr Memorial golf tournament to benefit the Memorial Hospital Foundation is being held today (Friday), but there's more to the backstory on this long-held charity event. Before it was named for the late Memorial president Larry Carr, it was called the Buck Owens tournament to support the Buck Owens Foundation.  Said current Memorial CEO Jon Van Boening: "The two best stories of these tournaments were John Wayne getting drunk every tournament at the BCC bar and Johnny Bench claiming he contracted Valley Fever attending one of the tournaments. Both probably true but who knows? When the Buck Owens Foundation decided to stop doing the tournament I picked up the ball and along with John Brock Jr. and Doug Findley (who at that time was partners in Advanced Beverage), started Club Out Cancer to raise money for the American Cancer Society. The ACS tournament existed for 25 years and when that charity decided to get out of golf I took the core of that committee and started the Larry Carr Memorial for Bakersfield Memorial Hospital.  Proceeds from this year's tournament are allocated towards the capital campaign to build a new children’s emergency pavilion at the hospital. "

* ... PARTY SCHOOLS: If you're a parent with a kid in college, you might be interested in Playboy's annual list of the top party schools. These lists are purely subjective, of course, but it's always interesting to see who makes the cut. The top party school? According to Playboy it's the University of Virginia, followed by the University of Southern California, Florida, Texas, Wisconsin, Georgia, Tulane, Texas Christian and Ohio State. 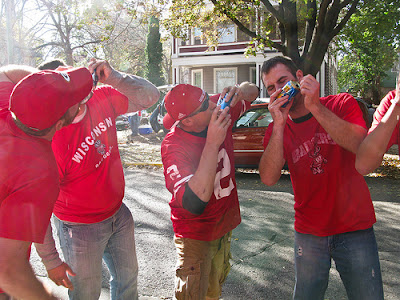 * .... SPOTTED: This bit of bad form comes from reader Dee Rhodes. "I was driving south on Highway 99 just a little after lunch today, and took the Golden State Avenue off ramp to come back into town. I came up behind a slow moving Cal Trans utility truck and trailer. As I was about to go around them, the driver and passenger each threw out their lunch wrappers, bags and empty soda cups onto Golden State Avenue.  I thought I had pretty much seen it all ."

* ... PTSD: Local Rotary Clubs are partnering with the National Alliance on Mental Illness to sponsor a special program on post traumatic stress disorder. The conference will be held next Tuesday from 6 p.m. to 8 pm. at the Good Samaritan Hospital on White Lane. It is open to the public and free. The program is specifically designed for veterans, first responders, their families and virtually anyone else. For more information or to make a reservation, contact Patrice Maniaci at namikernpatrice@gmail.com or (661) 333-5484.

* ... VETERAN SPAT: If you missed Steve Mayer's story in The Californian about the spat between two nonprofits that support wounded veterans, it is worth giving it a read. The story provides a rare insight into the workings of nonprofits, in this case revealing a nasty dispute between Jeremy Staat (he has a nonprofit that bears his name) and the Wounded Heroes Fund, which kicked him off its board. Kern County is well known for its generosity and support of veterans, but with that comes a responsibility by groups like the Jeremy Staat Foundation and the Wounded Heroes Fund to be transparent about where the money goes. No one is alleging any impropriety here, but the public dispute does put the spotlight on where the money goes. One interesting note: Staat and fellow veteran Wesley Leon-Barrientos raised some $140,000 on their bicycle ride across the country, and spent virtually all of it on the ride. And the Wounded Heroes Fund is sitting on some $300,000 in donations that have yet to be spend. Keep an eye on this story. 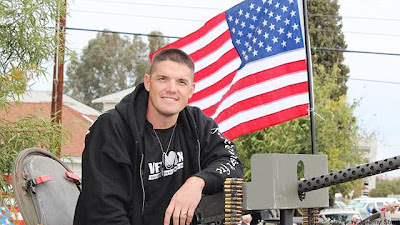 * ... B-25 CRASH: I learned of yet another local connection to the 1945 crash of a B-25 Mitchell into the Empire State Building, this one compliments of Connie Adams. "My father, Louis Triand, was an aerial photographer for the Army Air Corps (that later became the Air Force).  He was across the street at the time and dashed out of the building when he heard the crash. The impact shook the ground like an earthquake. He had a camera with him and proceeded to take as many pictures of the crash as he could.  One engine dropped down through the building, crashing through a wall to the outside and continuing on down, plummeting through a sculptor's roof. Another engine and the landing gear fell through an elevator shaft into a sub-basement. My dad did not take the photo that later became famous but has other similar ones of the crash. The Army Air Corps had the rights to the photos that he took but he was able to keep several for himself. For several days afterward, he was flown over the site by the Air Corps to take pictures of the crash site. The pilot was on a course for Newark airport, not La Guardia."

* ... COLLEGE: The annual rite of taking college-bound freshmen to dorms across the country has begun, and that means there are lot of parents showing up to work red eyed after emotional drives back home. It's a stressful time for both parent and child, and it forms memories that last a lifetime. My advice for all you parents? Somehow your kids will make it through and you indeed will hear from them: when they run out of money. 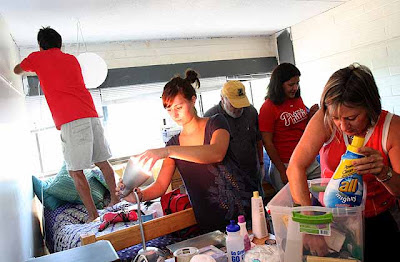 * ... SCHOOLS: If you think you need a lot of money to make a big impact for our needy schools, think again. The Bakersfield Californian Foundation has joined forces with a group called DonorsChoose.org to help teachers in this time of fiscal stress. It works like this: Teachers work through the DonorsChoose website to post what they need, and average folks like you and me can choose what classroom to help. And, the Californian Foundation is helping by offering matching funds for the projects that fit its criteria of early childhood literacy. If you go to DonorsChoose.org you can search by state, city, county and individual school. It's a fulfilling way to help teachers and our kids and make an impact

Posted by Richard Beene at 2:13 PM No comments:

* ... CITY COUNCIL: Bob Smith is a local civil engineer and land planning expert who is running to succeed David Couch on the City Council, and Monday he will be my guest on Californian Radio KERN 1180 beginning at 9 a.m. Smith is clear front runner in the race for the Ward 4 seat, now that attorney Harley Pinson has dropped out. The only other name on the ballot is Daniel Mbagwu, who has not campaigned visibly. City council candidate Bob Smith is also the founder of Bike Bakersfield, a group that encourages cycling friendly initiatives. He has been endorsed by Couch and should easily win election. But he should not be confused with another avid cyclist named Bob Smith, who is a retired endodontist, a USC alum and now a new member of the Seven Oaks homeowner's association board. (Council candidate Bob Smith shown below) 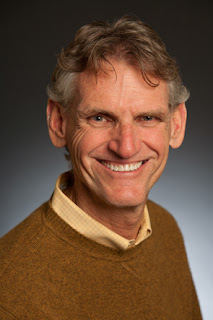 * ... TROJANS: And speaking of the University of Southern California, I took in the game at the Coliseum Saturday and watched the Trojans easily dispatch the Cal Bears. And proving you can't go anywhere without running into someone from Bakersfield, I stumbled into Joan and Bernie Herman and Carol and Mike Stepanovich at the game. Bernie runs the Bakersfield Museum of Art, Joan is a school administrator, Stepanovich works at Bakersfield College and Carol is a retired teacher.

* ... B-25 CRASH: Local Realtor Dick Taylor shared with me his own personal take on the 1945 crash of a B-25 Mitchell into the Empire State Building. Turns out his mother, Suzy Taylor, worked on the 32nd floor of the New York landmark but was off the Saturday of the crash. "In a notable coincidence, her future husband, my late dad Harris Taylor, was a B-25 pilot who was shot down a year earlier near Tarawa while on his 17th combat mission.  He survived and married my mom in
1953." 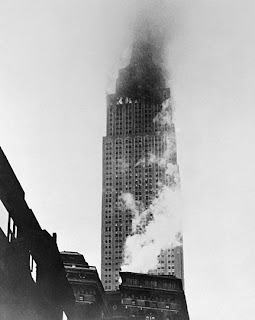 
* ... OKTOBERFEST: Reader David Collins submitted a shout out to one of his favorite local eateries. "Since it is currently Oktoberfest, my family and I went to Bit of Germany, a local culinary treasure.  Owner Frannie and her daughter, Denise, cooked and served a terrific dinner with Germany potatoes, melt-in-you-mouth trout and hot apple strudel.  If you haven't been to Bit of Germany in a while, now is the perfect time to take a quick spin to 'Bavaria.'

* ... BIKE PATH: Hard to beat the cooler mornings we've been having and Sunday our local bike path was crowded with walkers, runners and cyclists. The bike path now extends from as far west as Enos Lane all the way out to Hart Park and beyond, and literally of hundreds of folks enjoy it as a way to exercise and enjoy the local scenery. It's one part of our community that we can boast about. 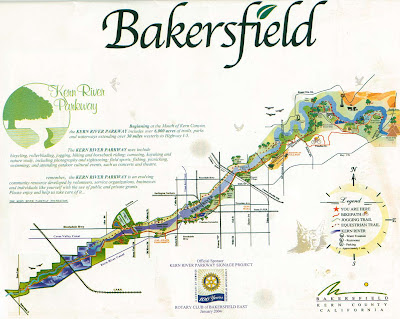 Posted by Richard Beene at 11:25 AM No comments: