The owners of Cafe Smitten looking at a new downtown business, The Cue gets ready to open and electric cars become the hottest segment of the new car market

Welcome to Bakersfield Observed. Our mission is to celebrate life in Kern County by focusing on newsmakers and events and the local characters who make this community such a special place. The views expressed here are strictly my own and do not represent any other company or publication.
* ... EASTCHESTER: Keep an eye on east 18th Street - dubbed Eastchester by the downtown crowd - for some new developments. First, the owners of Cafe Smitten - Stasie and Shai Bitton - are preparing to

open a new food and drink establishment across the street in the home of the old Dot & Ott. The venue will offer mixed drinks and food, and has been named the "Botanist." The original Cafe Smitten was opened in February 2017, followed by the Buena Vista location several years later. 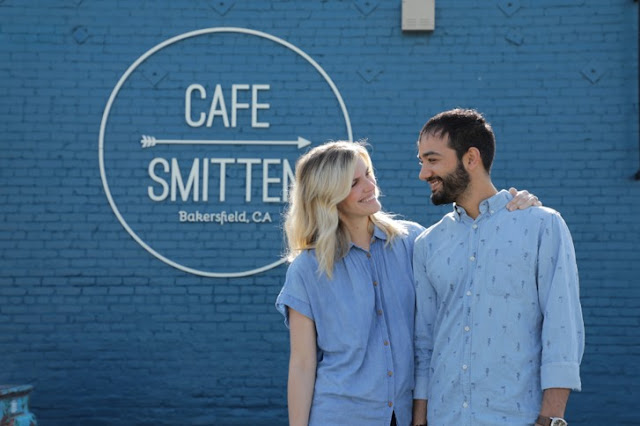 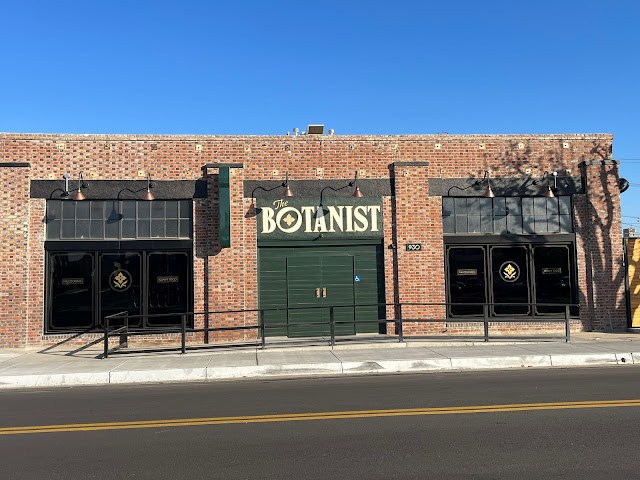 * ... THE CUE: A little farther east down 18th Street, nestled next door to the Silver Fox Lounge and across the street from Mexicali, the new Cue luxury apartments is about to open, providing yet more housing in the central business district. The Cue joins the 17th Street Townhomes as the latest project by city councilman Robert Smith and a group of investors. Ground already has been broken for a third apartment complex at the site of the old Sinaloa restaurant, and a fourth and fifth complex are in the works for the same area. 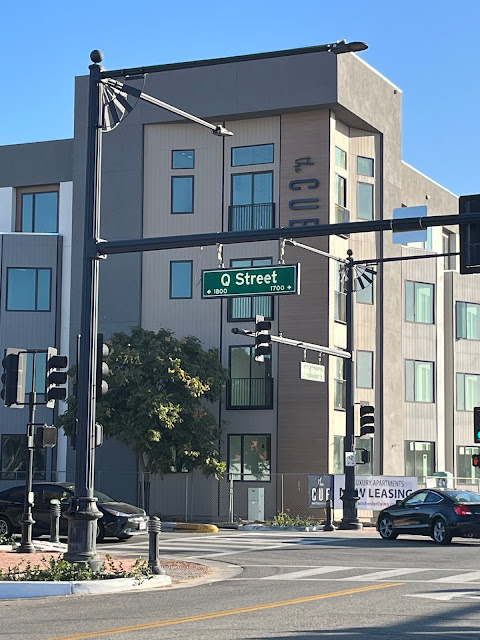 * ... NEW STORES: Meanwhile out on Rosedale Highway a new Chick-fil-A is being built at the site of the old Pier One. It will be the second Chick-fil-A in town and, judging by the success of the California Avenue location, this one will be a hit. In fact, developers are building the new franchise with two drive-thru lines to speed things up.
* ... ELECTRIC VEHICLE SALES: Sales of electric vehicles in the United States have gone mainstream and battery powered vehicles are now the fastest growing segment of the auto market. All that is according to Cox Automotive, who said sales of conventional cars and trucks declined 15 percent during the first nine months of this year compared to last year. Cox said buyers of electric cars tended to be both younger, and women. In that same period, the total market share of electric car sales jumped to 5.6 percent to 2.9 percent. And electric vehicles are also popular beyond California, home to early adopters.
* ... DOG IN PAIN? GIVE HIM A CBD BISCUIT: More Americans than ever are turning to CBD products to calms their nervous dogs. A recent survey of 409 dog owners, by the Center for Canine Behavior Studies, showed that over half the owners had given their dogs CBD treats to soothe their pets. Still, there are no studies that conclude how effective these treatments have been, but apparently most dog owners are convinced CBD biscuits do work.
* ... SPOTTED ON TWITTER: "There are over 8 billion people in the world now and you're still single."
* ... BAD DRIVERS: Here's a new study on California drivers that may not surprise you. According to a study by Lending Tree, California drivers rank as some of the worst in the nation and the worst of them are in two cities: Bakersfield ranked No. 1 and Sacramento No. 2. They were among eight California cities that made it into the top 10 list, including Richmond at No. 9, Riverside at No. 8, Fresno at No. 5 and San Diego No. 6. San Francisco weighed it at No. 5 and Los Angeles at No. 4. The best drivers, the driver said, were in Louisville, Ky., which landed at No. 1.
* ... SPOTTED AT NUESTRO MEXICO: Apparently famous Mexican filmmaker Guillermo del Toro was in Bakersfield recently and he ate at Nuestro Mexico, which has been highlighted in the southern California media for its authentic cuisine. The director posted this on Instagram saying he stopped in Bakersfield "for some sweet molten cheese w chorizo!!" 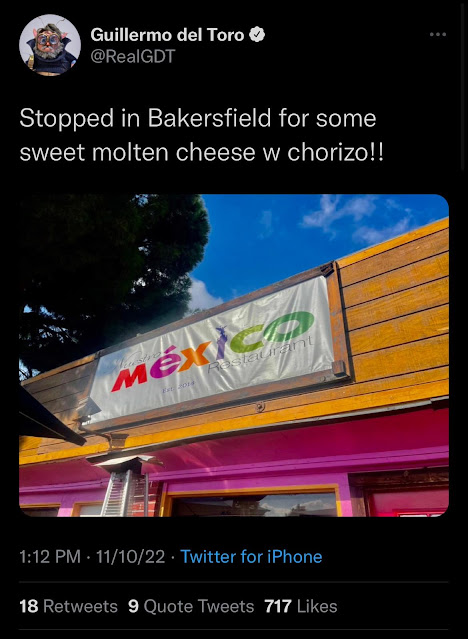 * ... MEMORIES: Compliments of the Bakersfield Memories Facebook page comes this picture of old downtown at 19th and Chester facing east in 1938. In the second shot, the Bakersfield History Fans page offers a promotion for Zippy the Clown. 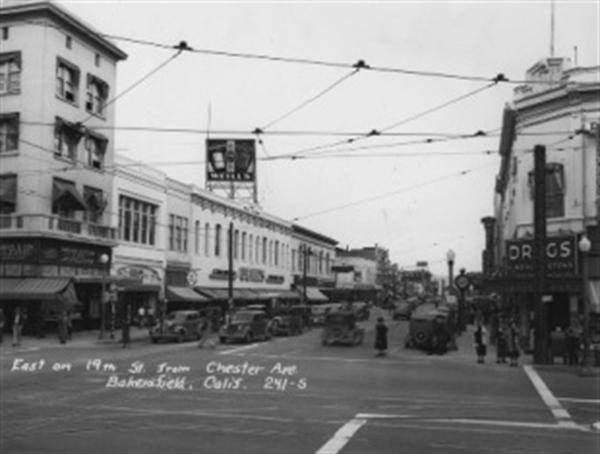 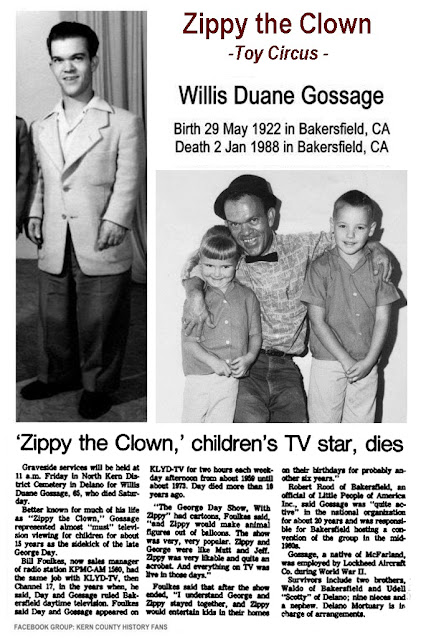 Posted by Richard Beene at 9:45 AM No comments: