* … DOWNTOWN: Not sure about you but I plan to spend this Friday downtown for the first First Friday of Spring. Among the attractions, both Uricchio's Trattoria and the Wall Street  Cafe have

new appetizers, The Padre has revamped its menu, Chef's Noodle bar is always a good choice and in my opinion, Muertos has the best burger in town. Over at The Metro Galleries on 19th Street, a new show titled "Echoes and Whispers-Listening to Nature" showcases the creative passion of artist Linda Brown. Ceramic works by Mark Ahlstrand will also be on display. 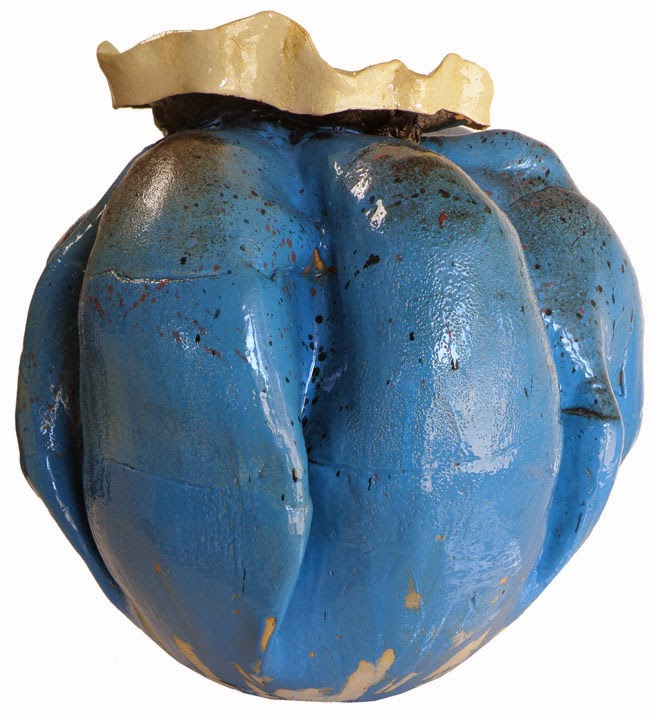 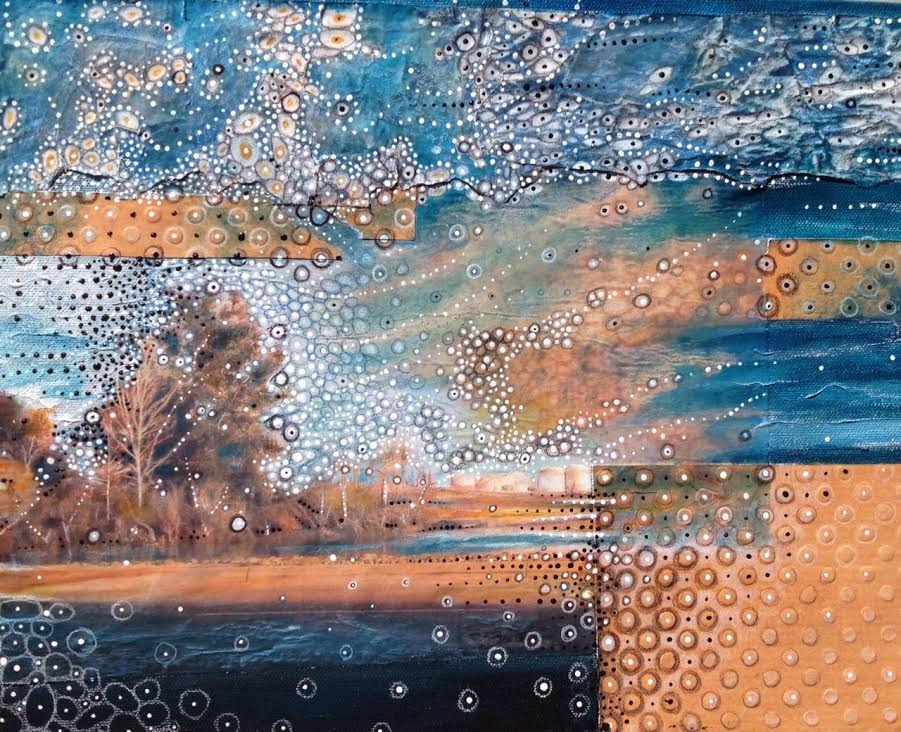 * … SPELLING: Dave Kettler told me a story that I simply must share. He was in the drive through lane at a downtown eatery recently when he saw a sign in the window saying, 'Thank you for your contentious business.' (Obviously they meant to thank the patrons for 'continuous' business.) When he came to the window, with his tongue planted firmly in cheek, he said 'Your prices are too high, the wait was ridiculous, the food cold and yes, you're welcome!'"

* … ART: Thursday morning members of the Bakersfield Museum of Art's Blue Ribbon Committee toured the art and sculpture-filled Bakersfield Country Club home of Milt and Betty Younger and were treated to a surprise gift for one of the visiting members. At the end of the tour, Betty surprised them by giving a framed watercolor she painted in 1965 of the Oleander home of W.B. Camp home to committee member Karrie Kirschenmann Camp, who is married to W.B.'s grandson, Clayton. Betty recalled sitting on the curb when she painted it almost 50 years ago. She said she had entered it in the Kern County fair and took first place.

* … MEMORIES: This memory courtesy of reader Michael Perry: "The recent USTA tennis matches at Bakersfield Racquet Club reminded me that my grandfather, Earl Cook, one of the founding members of BRC, once hosted the Ozzie and Harriet Nelson family (including David and Ricky) at his home on Baldwin Road during a tennis tournament at BRC in the early 1950's. Ozzie and Harriet were a tennis family before they were the perfect TV family. Lake and Edith Lovelace often joined Earl and Eva ['Feathers' and 'Mimi' Cook for a spirited game of bridge on Baldwin. Lake, the real founder of the Bakersfield Racquet Club, allowed me to take my first swimming lessons there even though I was way too short. (He proved it by measuring the depth of the pool with his cane and showing me even the shallow end was over my head!) My teacher was Tommy Gallon. I kid you not! "
Posted by Richard Beene at 3:46 PM No comments:

The nation marks the birthday of Cesar Chavez, but years after his death the United Farm Workers has become an insulated, irrelevant force, say critics

* … CHAVEZ: The legacy of Cesar Chavez has been in the spotlight this week - a new biopic movie on his life opened along with National Cesar Chavez Day - but is the union he founded still

relevant? Some critics say no, and they say his foundation now exists to run radio stations, attract grants and employ a few people. Miriam Powell, who wrote an unflinching portrait of Chavez and the United Farm Workers in the book 'The Union of Their Dreams: Power, Hope, and Struggle in Cesar Chavez’s Farm Worker Movement,' said this in an opinion piece for Fox Latino News:  "The man born 87 years ago today worked with a single-minded intensity few could ever match. For a time, that zeal produced unprecedented gains for California farmworkers. But the union he founded failed to thrive and has become irrelevant; farmworkers today know Cesar Chavez only as the name of a famous Mexican boxer. In the end, Chavez’s legacy is far from the fields, in cities across the country where his name evokes pride and his life serves as an example of what community organizing can accomplish." 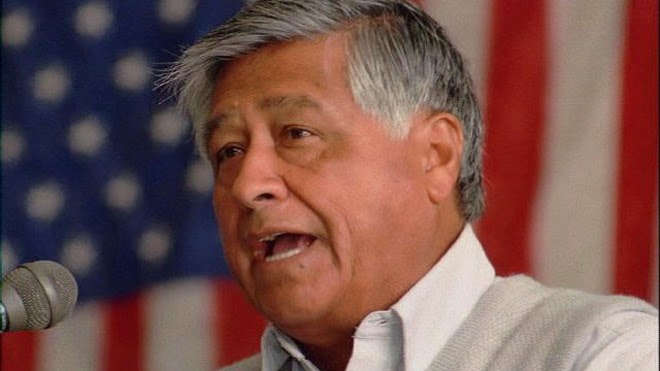 * … HEART HEALTH: Margaret Scrivano Patteson is the seeming picture of perfect health: an avid runner and cyclist, she rarely goes a day without a vigorous workout and watches what she eats. Yet while cycling recently the 51-year-old pharmaceutical sales rep suffered a heart attack, and her story is a cautionary tale for all of us who think we are doing the right thing but are unaware of the silent killers within us. Patteson appeared with me on First Look with Scott Cox to talk about her family history of heart disease and to thank her cardiologist, Dr. Brijesh Bambi, the folks at Bakersfield Heart Hospital and her personal physician, Dr. Raj Patel. Go to bakersfield.com to view the entire interview.

* … GOOD FORM: Julie Calvin submitted this bit of news to make your day. Last Sunday she went to PetStyling Co. on Coffee Road to pick up her dogs after being groomed. "As I hurried to get them safely into my vehicle, I apparently dropped my wallet in the parking lot. Not realizing that I had dropped it, I continued home.  About five minutes later I received a call from the manager at PetStyling and they had found my wallet (I didn’t even realize yet that I had dropped it!).  I went back to retrieve my wallet and everything was still in it. It’s nice to know that there are still honest people in the world!

* … CIOPPINO: Congratulations to Bakersfield West Rotary for another spectacular Cioppino Feed over at Monsignor Leddy Hall this past weekend. The proceeds from the event - it raised some $100,000 -  will help fund the club's foundation as well as Memorial Hospital's pediatric unit. 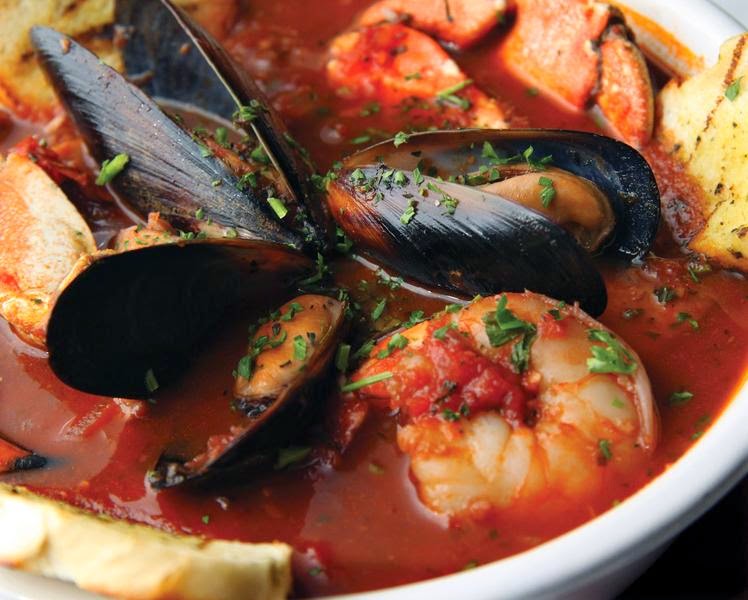 * … WRESTLING: I ran into Vernon Varner at the Cioppino Feed and he reminded me of another upcoming fund raiser to support the storied CSUB wrestling program. The event, planned for Tuesday, May 6, will feature former world wrestling champion and ex New England Patriots player Stephen Neal. Tickets are $75 each. Call Janis Varner at (661) 587-8157. CSUB wrestling could not exist with the help from the Varners and the Coyote Club, and it's worth your consideration to support this effort.
Posted by Richard Beene at 10:24 AM No comments:

North Dakota embraces fracking and it puts the entire state to work, and a liberal anti-gun state senator is arrested on firearms trafficking charges

* … FRACKING: I received this note from a reader who wanted to weigh in on the debate over hydraulic fracturing. Listen to Michael Jacobsen's words: "Greetings from Bismarck, N.D.! As on online subscriber to the Californian, I found it amusing to read your column about the environmental group that claims that fracking causes earthquakes. If that's the case, North Dakota should be like Jerry Lee Lewis's song

'Whole lot of shakin going on.'  Maybe someone should ask them to come to the 'Oil Patch' in Northwestern North Dakota. The unemployment rate in the Williston area is .7 percent (no joke).  Statewide, the unemployment rate is 2.4 percent. The state is prospering and people in Bismarck can make $10.50 an hour at fast food places. The wages are even higher in Dickenson and Williston. One lady from Dickenson said most of the young people will accept no less than $18.50 an hour for a part time summer job. True, there are accidents that occasionally happen, but these are usually taken care of quickly. There have been earthquakes in N.D., but not related to fracking. On an unrelated note, I will be moving to Bakersfield in a month or so. My beautiful bride, Sharon, is there right now looking for a place to live. We hope to meet you sometime." Welcome back home Michael! 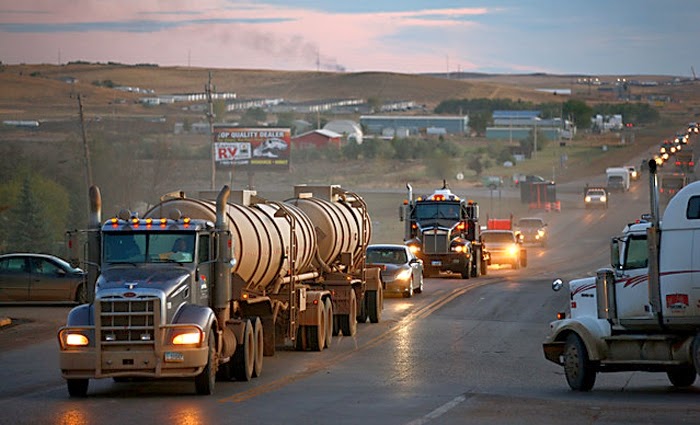 * … KARMA: How appropriate is it that state Sen. Leland Yee, who prides himself as a gun control advocate and has spent years writing anti-gun legislation, is arrested and charge with conspiracy to traffic in firearms? What is it they say about karma? (photo by the Associated Press) 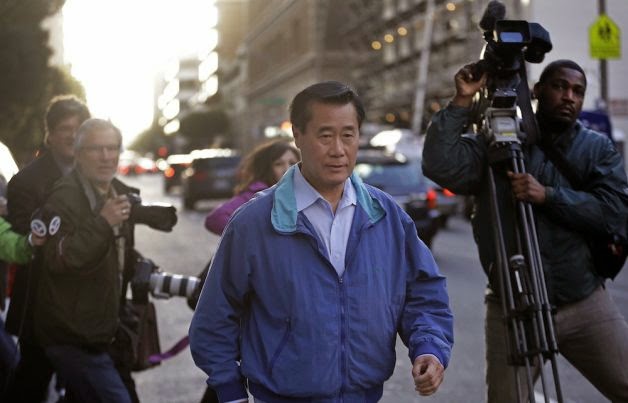 * … BAD FORM: Darlyn Baker was in the drive through lane at the downtown Starbucks when this happened: "As I turned the curve getting closer to paying, to my surprise and dismay was an empty Starbucks cup someone had tossed in the flower bed. Unbelievable!  Surely the car in front or behind them had to see them tossing it out, assuming they were not the only one in line. I guess some feel entitled and don't give a flying flip about littering."

* … JURY DUTY: Superior Court Judge David R. Lampe responded to the reader who complained about jury duty. "I sympathize with those who are called to jury duty who experience delays and excessive waiting, he said. "I ask all of the jurors who come to my court to please be patient with the process. While we respect efficiency, it cannot be our highest value. Our most compelling ethic is fairness. We judges have to 'get it right,' and that takes thoughtful deliberation and time. What we ask of jurors is their time, even if that includes sitting and waiting while matters are being conducted outside of their presence. We cannot instruct all prospective jurors 'en masse' because the parties have the right to be present, and every case is unique, even if there are common legal principles. We judges hear the case at the same time as the jurors, and so there is a lot that goes on in the courtroom that jurors do not hear. We cannot try the cases twice, once to the judge and then to the jury, which would make things less efficient, rather than more. Our jury system is unique and precious. Laws are merely abstract notions, until they are applied by the courts. Everyone should keep in mind, when those laws get applied, they might be applied to you. With that perspective, I am sure most would desire a calm, careful, fair, and deliberative process where the common will of the citizens of the community decide the question. To paraphrase Winston Churchill, the American jury system is a terrible form of justice. It is just that all of the others are so much worse."
Posted by Richard Beene at 2:19 PM No comments: