Locally owned Olcott's home store will be closing and what's the problem with hailing a cab at Meadows Field airport?

* ... IRISH: Dr. Shawn Shambaugh and his wife Teri were among the thousands who flew to Dublin, Ireland, last week to watch Notre Dame beat Navy in college football. They traveled with Mike and Marci Soper and Craig and Mary Kaye Hammon, and while there saw many local kids, including Notre Dame students Julia Berchtold and Brandon West and Ian Hagen (a graduate of Garces Memorial High) and David Dolinar (Stockdale High), both of whom are attending the Naval Academy. Said Shawn: "I can attest personally, we all can be very proud of these kids." 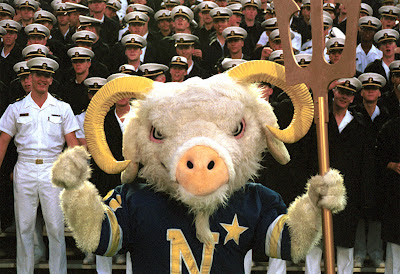 * ... OLCOTTS: I was saddened to see that Olcott's, the large home furnishings retailer that has been a staple of our community for years, has gone out of business. Here's something to remember about locally owned businesses like Olcott's: online and other national and regional retailers can perhaps offer greater selections and competitive prices, but they can never replace the way families like the Olcotts have given back to our community in ways small and large. Every time we lose an Olcott's, the community loses a little of the fabric that makes Bakersfield special. 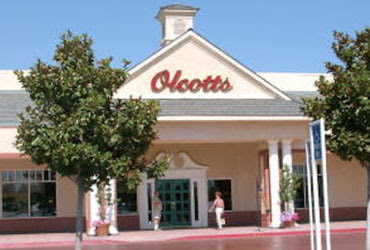 * .... OVERHEARD: In a local dental office a woman is talking about her car being broken into off Gosford and White Lane. "I was picking up my friend and went into her house for maybe three minutes. When we returned my window was smashed and my purse was gone."

* ... MEADOWS: Ever try to catch a cab at Meadows Field after a flight? Well, it's not easy and in fact in some cases seemingly impossible. Take the case of Rogers Brandon, a local radio group owner and friend who flew in from Phoenix at 6 p.m. last Monday only to find no cabs waiting. Luckily he had called ahead and managed to grab a cab and spoke to the driver about why more cabs didn't meet flights Apparently, Yellow and American Cab (same ownership) have the concession for cab service from the airport. The concession is about $3,500 per year and it gives them the right to meet planes and prohibits all others from doing the same. The problem, according to my driver, is that Yellow and American cab rarely meet the planes, stranding people at the airport. If another company is called, as I did, they may circle the airport to pick up a fare. But only by appointment. The driver said that he regularly is called to the airport to pick up stranded passengers, delivers them and returns to the airport for more passengers. His record is four trips to meet fares from the same plane." The driver said he had approached airport management but was shrugged off. "Most residents do not use the cab concession and so you don't hear about it. But dozens from out of town plan to use the cabs everyday and, when stranded,  it reflects very poorly on our community."

* ... SPOTTED: Christine Lollar was at the intersection of Fruitvale and Rosedale Highway Tuesday morning when she came upon a woman whose SUV had died. "It seemed like several hundred cars were behind us. I rolled down my window to call to her when to our relief (more her's than mine to be sure) a young man wearing a Bakersfield firefighter shirt walked up to her then proceeded to push her (quite the hill - pushing several thousand pounds - not the lady, the car) across Rosedale to the dead end portion of Fruitvale. I rolled down my window and bellowed 'thank you' receiving a dashing smile in return (not the lady, the firefighter). I will say I 'spotted' at least several dozen men in work trucks and business suits who didn’t help at all."

* ... CSUB: Despite all the challenges facing our local university (and there are many) it's good to see that Cal State Bakersfield is expecting another year of record enrollment. President Horace Mitchell says some 8,255 students are enrolled to date, and of those more than 1,300 are first time freshman, a record freshman enrollment. 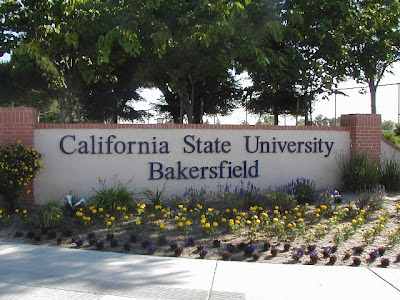 * ... PITBULLS; My inbox was overflowing with comments on pitbulls following a reader's post about dogs off their leashes on the Panorama Bluffs. Here are two examples, from both sides of the debate. Dannette Keeler said she used to be afraid of pit terriers until she met one named Buddy. "My husband brought him home from work because he was left there because his owner couldn't have him at an apartment. For months he wanted to bring him home and I refused. We already had the greatest dog and breed, a golden retriever. Well that was five years ago. I kick myself for the months I wasted with my prejudice. When I meet this sweet heart he climbed in my lap, kissed me and curled into a tight ball like a kitten. He is now Buddy Dallas Keeler and more loved than you could know.  He has been around every circumstance from babies, children, (Halloween is his favorite he greets the kids with a gentle kiss), elderly, small crowds, large crowds and last week a lost dog who walked into our home and scared him! He barked but did not bite!" 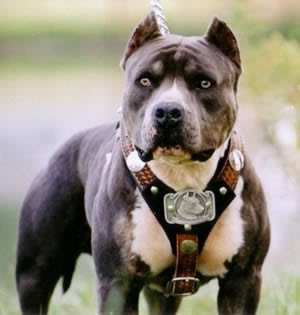 * ... MORE PITBULLS: Meanwhile there are folks like Christy Morgan, a dog lover from way back but one who had a bad run-in with pitbulls a few years ago. She had been running with her golden retriever on the bike path near Cal State when a family of pitbulls attacked her dog. "They got him down in a ditch on his back and began tearing away at his neck and trying to tear his ear off. I kicked them, screamed at them, and threw any thing that I could find at them, all to no avail. When the pits’ owner finally got to the scene, she was so scared of her own dogs that she was unwilling to do anything to try to stop the fight." Finally, Christy picked up her bloodied dog and shrieked at the one dog who had not backed off. "When I turned and looked at my baby, he had blood all over his head and neck. One of his ears was hanging on by a thread of skin (literally)!" Her dog survived, but it's no surprise she has been wary of pitbulls ever since.

* ... FIRST FRIDAY: It's time for another First Friday and this one promises to be one of the best of the year. It's all centered around "Latination," a collection of dozens of pieces of really impressive art recognizing the culture and vibrancy of Latin American life. The juried show begins around 5 p.m. at Don Martin's Metro Galleries on 19th Street, and will feature food by El Pueblo and music by Mento Buru. But that's not all. You are missing out if you don't hit one of our downtown restaurants, starting with old reliables like Uricchios Trattoria and extending to new startups like The Mark and Muertos. Expect a good crowd and perfect weather. Make a night of it. 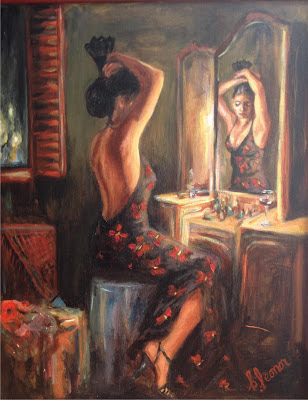 * ... HERRERA: Also on First Friday well known local artist Alberto Herrera will be at Kuka's Folk Art on 19th Street signing his most recent children's book called Musika. Stop by to meet the artist and to enjoy the local folk art store.

Oh to be Irish in Bakersfield! And what is with our community's obsession with pit bulls?

* ... MORE IRISH: Bakersfield has always had a strong pipeline sending kids to Notre Dame, and Janet Saltvick Nelson is among those parents who beam with pride at everything Irish. Her daughter, Katie O'Sullivan, graduated from Cal State Bakersfield and went on to Notre Dame to earn her Ph.D. in geology.  "She was born and raised here in Bakersfield and is a product of the Bakersfield school districts. As her single mother of all those years, raising her here in Bakersfield, I have always told her she could accomplish what ever she wanted to and she has. That is what she wrote as her dedication to me in her dissertation. I think the thing I am most proud of is that she and I have accomplished getting her through nine years of college with absolutely no debt. It can be done. Her entire extended family and friends that have supported her are thrilled to call the future Dr. Katie M. O'Sullivan, a Bakersfield native." That deserves a job well done to you, mom. 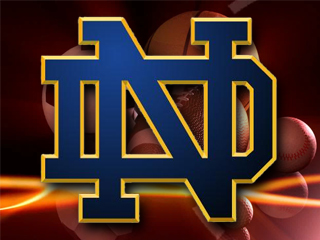 * ... PITBULLS: I am aware of the argument that pitbulls are like any other dog, but I am among those who are simply uncomfortable getting too close to a strange one. And so is Christian Zoller, a reader who wrote that he encounters a lot of the dogs up on the Panorama Bluffs. "Just within the last week, on two separate nights,  I have been alarmed to see that numerous people are exercising their unusually muscled pit bulls by running and walking them up and down the bluffs. Some of the dogs have bar bell plates around their collars. Many are left off of their leashes. The paths are very narrow in places and can be very difficult to avoid being near them, especially the ones that are not on a leash. I hope you can inform your readers of this potentially dangerous condition. Many families run and walk on these same paths." 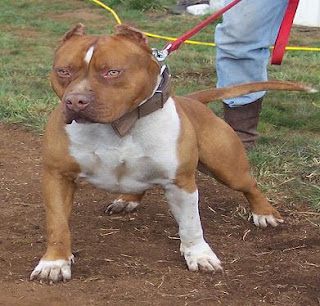 * ... BLUFFS: And speaking of the bluffs, it's always discouraging to see the mounds of trash (usually fast-food wrappers but also the occasional diaper) casually left in the gutter by those enjoying the Panorama Bluffs.

* ... SPOTTED: In front of Hoggz Surf Shop a young woman gives her boyfriend an affectionate kiss before they hop on bicycles (sans helmets) and head out on the bike trial. Memo to boyfriend Matt: remember what paramedics call bicycle riders who don't wear helmets? Organ donors.

* ... ROTARY: Another shoutout to our community's Rotarians, this one from Vija A. Turjanis who supervises a children's team at Kern County Mental Health.  "We work with very high risk youth many of whom are in foster care and have had extremely traumatic life experiences.  I read your column regularly and was pleased to see that you recognized the Twilight Rotary. Please recognize Bakersfield West Rotary as they have been sponsoring my team since 2005. The way they sponsor us is by an event called Child Spree where they usually provide 30 kids with a $100 gift card for school clothes (shopping spree at Kohl's), back pack complete with school supplies and a hot breakfast.  This year they sponsored 40 of our neediest youth at Child Spree.  It is events like Child Spree that boost these youth self-image/esteem by preparing them for the new school year, but moreover by letting them know that there are people in the community who believe and care for them. "

* ... BAKERSFIELDISM: From Evan Jones: "You know you're from Bakersfield if you've ever stood in line for Huell Howser's autograph."
Posted by Richard Beene at 10:02 AM 2 comments: