Reminiscing about the first general election in a long time without Dan Rather, who once characterized a race was as "tight as rusted lug nuts on a '55 Ford." And California Democrats close in on a super majority in Sacramento

* ... SACRAMENTO: California Democrats are nearing a "super majority" in Sacramento that will allow them to pass virtually anything without any Republican votes. Along with the passage of Prop 30 tax increase, this is a huge windfall for Gov. Jerry Brown and it reflects the weakness of the Republican Party in California politics. (Republicans now account for just 31 percent of the registered voters in California) As George Skelton of The Los Angeles Times said: "And history teaches us what absolute power can do: affix blinders and corrupt... With a two-thirds vote, there's virtually nothing that can't be done in Sacramento. You can raise taxes, override a governor's veto, write constitutional amendments, propose bond issues."

* ... DAN RATHER: Did you miss former CBS News anchor Dan Rather presiding over election night? Rather certainly had his quirky side, but his humor was legendary. Some of Rather's funnier takes from previous general elections: "His lead is as thin as turnip soup ... This situation in Ohio would give an aspirin a headache ... This race is shakier than cafeteria Jell-O... Now Florida, that race, the heat from it is hot enough to peel house paint ... In southern states they beat him like a rented mule ... He swept through the South like a tornado through a trailer park ... This race is as tight as rusted lug nuts on a '55 Ford." 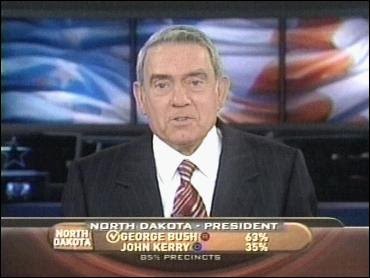 * ... SPOTTED: From a longtime reader who asked to remain anonymous. "Yesterday I was driving north on North Chester when I spotted a maroon pickup that was loaded with religious stickers on the bumper, tailgate and windows.  I thought to myself 'Now there's a very good Christian' -- until I witnessed the following: He started tailgating a car and did so for about three blocks. The tailgater got a chance to pass the car and as he went past gave the finger salute! My only hope is that maybe he had borrowed the truck!"

* ... TRASH: More frustration about the trash on our streets from Bonnie Farrer:  "I see the trash and think 'government failure.' We pay high taxes in this state, yet our roads are disgraceful. A very wise citizen suggested that prisoners clean up our roads, then if people are ever caught throwing trash out their car windows they too can become prisoners!"

* ... TAGGERS: And finally, reader Rich Partain shares his frustration with taggers. "Nearby there is a nice stretch of concrete block wall that fronts a storm drain sump. One day public employees are dutifully trimming and shaping between the bushes that grow along it.  Within a short time taggers put their mark on the now accessible cleared section. Soon after the graffiti cleanup truck shows up and the worker is busily removing the offending calligraphy. It is a lot harder to leave a painted message on a fast growing shrub than a clean wall. Seems some communication is in order here with faltering government budgets and mandated cost reductions coming from on high."

* ... SANDY: Hurricane Sandy has come and gone, but the relief effort in parts of New York and New Jersey is still struggling to help thousands impacted by the storm. If you'd like to help, former East Rotary Club president Dan Giordano reminded me that most Rotary clubs are acting as conduits to get donations to the needy. There is always the Red Cross and Salvation Army, but now is the time to give.
--
Posted by Richard Beene at 1:58 PM No comments:

Does running a picture of President Obama consoling a hurricane victim equate to bias? One reader says yes, another says no.

* ... FRONT PAGE: More feedback on the front page picture we ran of President Obama consoling a victim of Hurricane Sandy. "A quick comment on your response to reader Randy Grigg's accusation that the front page picture of Obama was biased," wrote Don Craib. "Of course it was biased. That picture jumps right off the page as a picture of a 'loving, caring, giving man.' As an
intelligent newspaper man you know exactly what that pictured conveyed. It's not nice for CEOs to lie Mr. Beene. In fact, the intent of the picture was so obvious, your comments made you look silly." Well silly me, Dan. This is why I am anxious for this election to be over, when readers like you read conspiracy in every movement. Hurricane Sandy inflicted horrific damage on the East coast, and I have no issue showing either candidate as caring and compassionate in situations like this.

* ... OTHER SIDE: Then there are readers like Kathy Scott, a longtime Republican, who weighed in with this response: "In defense of the newspaper, seeing as it has been attacked as being one sided, let me tell you this. I read the paper cover to cover every morning. It covers everything that I want to know, from the Benghazi attack to hurricane Sandy it covers it all and I see no bias. If a reader wants to truly see bias they need to be in Santa Barbara and read the News Press!  I lived there for 15 years and there is only ONE side you get to see and that is the far liberal left view. I am one of those people who watch news 24/7 (all stations to see what they are saying, although Fox always gives me both sides so I am partial to them), but I also watch the Senate and the Congress and see first hand what is being said. It is amazing to see what a truly biased newspaper will twist (the News Press for instance) thus giving its readers a very untrue view. Our newspaper, the Bakersfield Californian is not biased in its reporting, in my view!" Thanks, Kathy.

* ... SPOTTED: Kudos to the young woman seen sweeping up trash around a city container on the bike trail off Chester Avenue.

* ... LITTER: Dave Collin has had enough with the garbage and litter on our streets, so he has started a new walking group to spruce up his neighborhood. "I have started a new walking group among the members of the South Oswell Neighborhood Watch, which is located in Southeast Bakersfield.  It is called the 'Tyner Walkers' and named after our neighborhood of Tyner Ranch.  Each of our participants has agreed to pick up just two pieces of litter on their exercise or family walks, helping to keep our area clean and build a community identity." Now, just imagine if groups did this all over our fair city?

* ... MORE TRASH: Another reader, Charlie Powell, reacted to a recent post about how clean the freeways are in Texas. "That is because of the 'Don't Mess With Texas' program, an outgrowth of the earlier push by Lady Bird Johnson to clean up the Texas highways. First offense is a $500 fine! And is aggressively enforced. Second offense is $2,000! Blue signs all over Texas warn you. California doesn't seem to have the political will to do this, along with the cell phone and texting while driving plague. Set the fines and enforce... you'll see clean highways with non-distracted drivers."

* ... AIRPORT BUS: Lyndon Richardson wrote with this warning about the airport bus that shuttles between Bakersfield and Los Angeles airport. "When taking my trip last week, I boarded what was not the normal Coach America bus at LAX to return home (the only reason that I knew I was on the correct bus is a gentleman stopped at the Bakersfield pickup and yelled BAKERSFIELD).  Once all the airport pickups had been made, we left the airport and drove over to one of the local hotels.  We all had to leave the bus and move all of our belongings to another waiting bus. When we asked why, we were told that the Bakersfield Airport Bus' airport pickup permit had not been renewed and until it was, they were using another LA company that was permitted to pickup and deliver the Bakersfield passengers onto the airport grounds.  They expected to have this resolved within 45 - 60 days. "
Posted by Richard Beene at 2:56 PM No comments:

Has City Councilman Rudy Salas gone too far with his negative attack ads on opponent Pedro Rios? And did The Californian show bias by running a picture of President Obama?

* ... ELECTION: At this point in the campaign most of us just want this election to be over, but there will be plenty of drama on election day. Several local races are razor tight and there are a number of controversial propositions on the ballot. Former Kern County supervisor and longtime political consultant Gene Tackett will join me on Californian Radio KERN 1180 to discuss the general election and what is at stake. We'll be chatting about the presidential race as well as the City Council and Supervisor races. Join us at 9 a.m. Monday.

* ... BIAS: Reader Randy Grigg took me to task for allegedly showing liberal bias by showing a picture of President Obama comforting a storm victim in New York. "As a subscriber for over 30 years and local small businessman I'm appalled at the picture on the front page of Obama holding an emotionally distraught woman because of the storm that hit the East coast. Why didn't you have a front page picture of the father whose son was killed because of lack of appropriate military action in Benghazi... and his comments?  Why aren't you covering the developments of this horrible incident?" Randy: You have to cut me some slack here. The story of Hurricane Sandy and its trail of devastation in New York and New Jersey was the big story of the way. We didn't mean to imply bias by running a picture of the president.

* ... SALAS-RIOS: Politics is not for the faint of heart, and perhaps the nastiest local race this year is between City Councilman Rudy Salas and former Delano Mayor Pedro Rios who are competing for the 32nd Assembly District. The negative and clearly misleading attack ads by Salas on Rios have been unrelenting, and now it appears they have created a small backlash from folks who question if Salas has gone too far. Is going negative a smart strategy? On Tuesday, we will see. 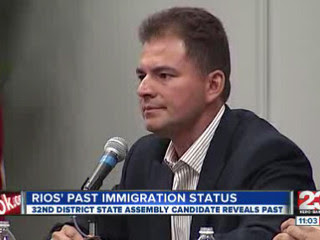 * ... TRASH: Keith Key is a local businessman who shares a growing frustration with the trash that litters our roads and parks. "I was reflecting on my recent trip to the World (skeet shooting) Championships in San Antonio, Texas. My wife and I really noticed the lack of trash on the Texas highways. Why can’t the people of California, take the same kind of pride as the people of Texas?"

* ... HUSKERS: Kelsey Fien is a graduate of Frontier High School who is making quite a name for herself on the Nebraska Cornhuskers volleyball team. She helped lead the No. 4 Huskers to an important upset victory over top-ranked Penn State and is one of the team's standout players. The 6-foot, three-inch Fien is a freshmen in Lincoln. 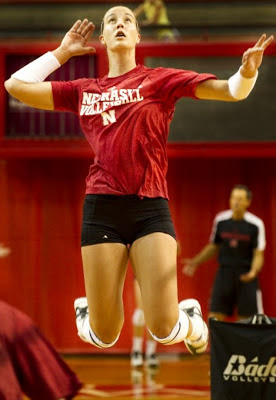 * ... CAMERON: Last week I shared with you the story of 12-year-old Cameron Caneta, who decided to surprise Monsignor Craig Harrison on his birthday by collecting food for the needy. Since then, folks have been lining up behind Cameron to join the drive. Said his mother Mary Caneta: "We were surprised today with three more cases of food and a young man pulled up in his truck to donate a truckload of clothes, shoes, socks, razors etc. More calls coming in! I told my son...'Job well done' and he replied 'Thanks Mom, but I am not done yet!'" 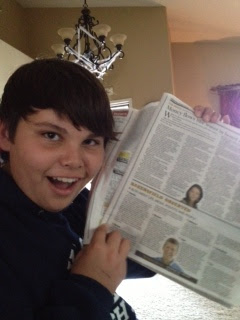