Texas leapfrogs to the third largest oil supplier in the world behind Saudi Arabia and Russia, H.A. Sala defends Supervisor Leticia Perez and the community rallies behind the Gleaners

* ... SHALE BOOM: Just how important is the shale oil boom in the United States? Well check this

out: did you know that the Lone Star state is now the world's No. 3 oil producer, behind only Russia and Saudi Arabia? That's what a recent HSBC report said, thanks to two massive Texas oil fields and advances in hydraulic fracturing technology. Said CNN: "Much of the excitement in Texas centers around the Permian Basin. Some oil execs believe the amount of oil in the Permian rivals Saudi Arabia's Ghawar Field, the world's largest conventional oilfield. Rapid technological advances have dramatically brought down the cost of pumping oil everywhere, especially out of the Permian. Wells there can be profitable below $40 a barrel." 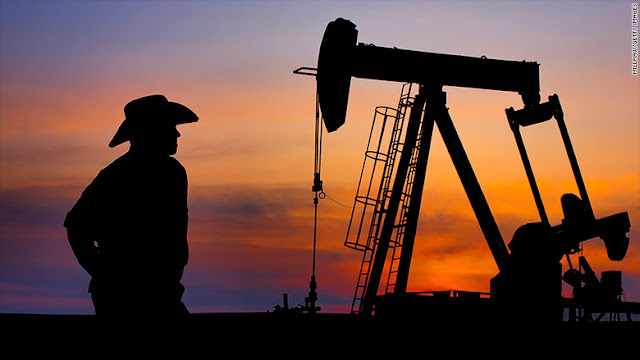 * ... LETICIA PEREZ: The lawyer defending Supervisor Leticia Perez on conflict of interest charges appears to be focusing on unequal treatment under the law, and not that she was the victim of racism. H.A. Sala, one of the keenest criminal defense attorneys in the valley, told me on KERN NewsTalk 96.1 FM that District Attorney Lisa Green had not presented one shred of evidence that Perez stood to benefit from her position supporting the regulation and sale of marijuana in Kern County, even though her husband, Fernando Jara, was a cannabis consultant. Instead, he said, there might be a stronger underlying reason why Green chose to prosecute. And that, he said, was because Perez did not actively campaign for assistant DA Scott Spielman to replace Green as district attorney. Further, he wondered why Perez was not treated similarly to City Councilman Bob Smith, when Smith was cited for lobbying for a client before the city Planning Commission. Both Smith and Perez, Sala said, stood to benefit financially and unlike Smith, Perez never lobbied on behalf of one of her husband's clients. Sala said he would demand a full dismissal of the charges, and if not, we are headed for a trial. 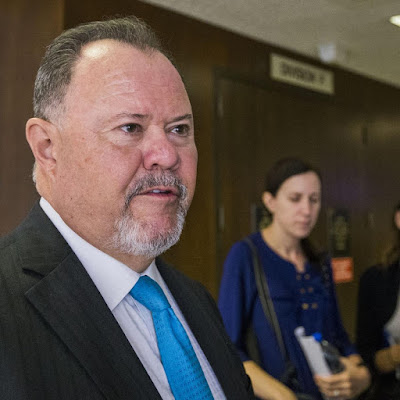 * ... SPOTTED ON TWITTER: "Here’s the thing, I love you but I don’t want to rearrange furniture just to see how it looks."

* ... MORE TWITTER: "Next up, Melania holds a presser to say she thought her jacket said 'I really do care' not "I really don't care.'"

* ... GLEANERS: You know how they say that Kern County is such a generous place to live? Well there was more evidence of that when the community rallied behind the Golden Empire Gleaners after thieves stripped its air conditioning unit of all copper. The community stepped forward with grants and in-kind donations and the unit has now been replaced. The Gleaners specifically thanks California Resources Corp., Whisler Air Conditioning and Heating and Reese's Crane Service. 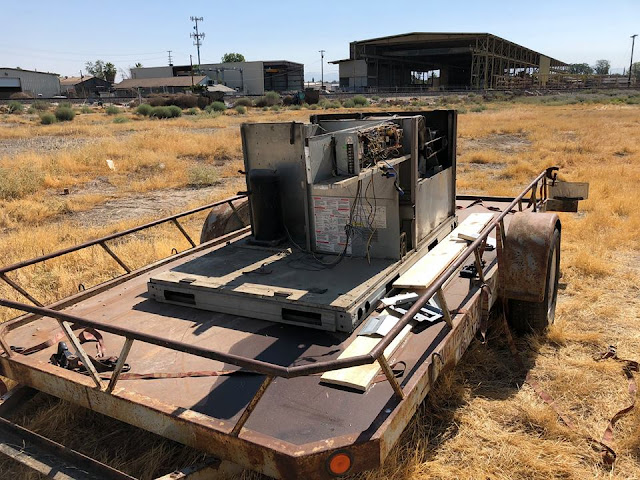 * ... CRIME: How bad is crime about town? Check out this Facebook post from a man who video taped a young man stealing items out of cars and trucks near White Lane and Old River Road: "Confronted this guy and his buddy just causally walking down the street this morning at 5:30 AM, check car doors, stealing stuff, claiming they need to feed their family. Brazen, defiant, bold. Near Old River and White Lane. The early bird gets the worm! There were several cars unlocked that they just reached inside, filled their backpack, and kept on walking. What would you do? Is it worth escalating? It's only 'just stuff' being stolen when it's not your stuff...right? I just followed them for about 30 minutes and called the police. Is it only me but does it feel like our culture is against law and order? Yes, I filed a police report."

* ... MEMORIES: Check out these old photos from a personal photo album, take in December 1946. 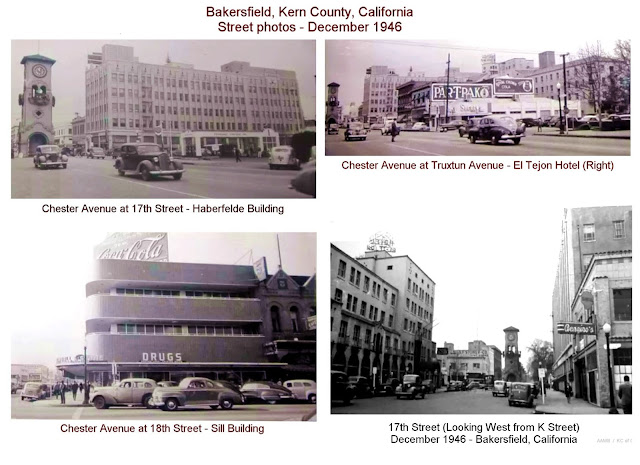 Posted by Richard Beene at 6:34 AM No comments:

The hottest place in Bakersfield is the emerging "Eastchester" district of 18th Street, a local couple run into Billy Bob Thornton on the road and the telephone scammers are out in full force

* ... EASTCHESTER: The hottest area in town these days is the corridor of 18 Street east of

Chester, dubbed "Eastchester" by the downtown crowd. This new, emerging arts and restaurant district extends from Chester all the way east to Mexicali, and it includes such iconic mainstays as Bill Lee's, the Rice Bowl, Sequoia Sandwich Co. and Goose Loonies. What has made the area so hot? Well it isn't because of government incentives or planning but rather business people who have a vision and passion and the capital to make their dreams come true. People like city councilman Bob Smith and his investors who built the 17th Place Townhomes and the adjacent Cafe Smitten, where Smith's daughter Stasie and her husband Shai have created something unique and special. A few blocks farther east you have the renovated Silver Fox Starlite Lounge, where serial entrepreneurs Rod and Julie Crawford (Pyrenee's Cafe) have laid their claims to part of Eastchester's charm. More changes are coming, so stay tuned. 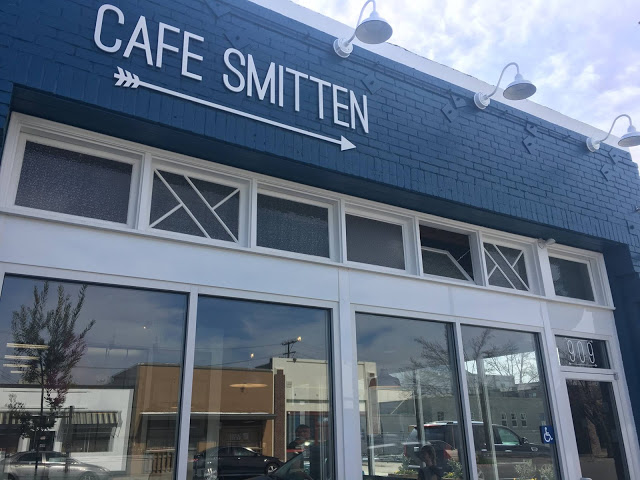 * ... SPOTTED ON TWITTER: "Yawning is your body’s way of saying 20 percent of battery remaining."

* ... BILLY BOB: So what do you do when you are out of town bowling and in the lane next to you is actor Billy Bob Thornton? If you are Doc and Joyce Victor of Bakersfield, you strike up a conversation. Doc, president of Summit Bible College and Joyce, a retired teacher, were in Nevada when Thornton complimented Doc on his bowling game (he had thrown five straight strikes). Turns out the Victor's daughter, Selah, is an actor as well and played in "Bad Santa" with Thornton. And it also turns out that Doc Victor is an accomplished singer and he left Thornton with a CD of his new songs. 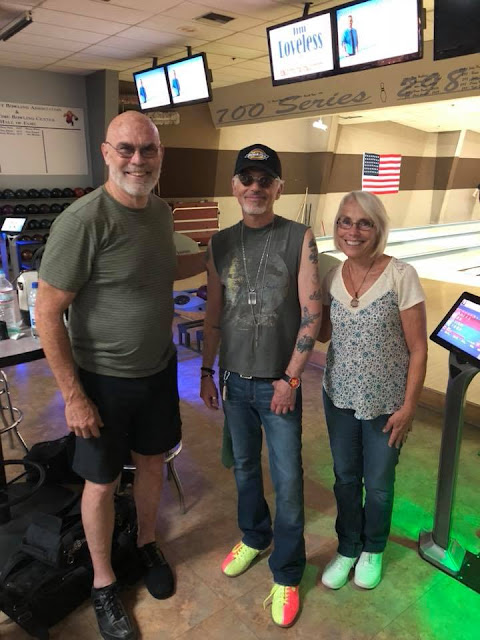 * ... SCAM: There seems to be no end to those telephone scams. There are scammers who pose as Internal Revenue Service agents, and others who claim to have kidnapped your son or daughter. And now comes this: scammers who say they are from the Kern County Sheriff's Office. Listen to local Watson Realtor Mary Christenson on what happened to her: "Just had the scariest phone call: supposedly from the Bakersfield sheriff's office (blocked caller ID). He told me I had missed jury duty on July 9th and I was under electronic arrest, quoted me two counts of criminal citations-failure to appear, etc., and I must post a $1,000 bail bond. I must stay on the phone while I go to my bank and withdraw $1,000 cash, then he will be on the phone with me while I come straight to the sheriff's office to post this bail bond. I said I have never heard of this before. I demanded his name and ID and he got very angry and said he was sending deputies out to arrest me! I hung up and called 911 and the dispatcher said it is a scam.
That's okay, my dog would tear him apart if he came to arrest me. Charlie would make him into pulp!"

* ... MORE SCAMS: And did you hear about the latest scam hitting people who have Medicare insurance? This one involves the new Medicare identity cards that are being issued to some 60 million Americans. The reason: the new cards will no longer display your Social Security number, replacing it instead with a new Medicare ID number. Seizing on this change, scammers are calling Medicare members and demanding payment, threatening steep fines or even jail time if people do not comply. It's all a scam, the latest example of people trying to take your hard earned money. 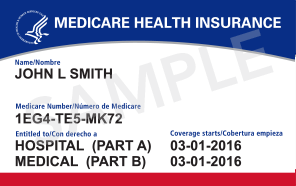 * ... MEMORIES: Check out this classic photo of Bakersfield circa 1958. 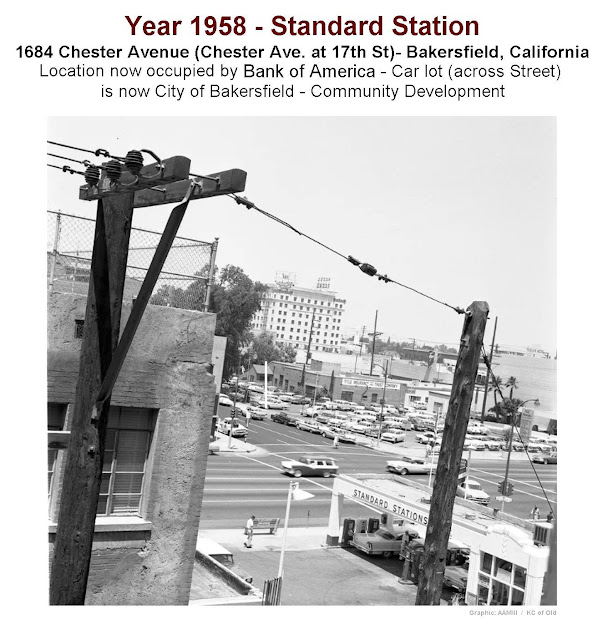 Posted by Richard Beene at 4:18 PM No comments: