Kern County could earn $218 million over 20 years in a deal with the Hard Rock Hotel and Casino, the mystery behind the deal of Jose Arredondo, the Californian raises subscription rates, and homeless advocates want to protect "curbside communities."

* ... HARD ROCK: The county could earn $218 million over 20 years under a proposed deal with the Tejon Indian tribe and its proposed Hard Rock Hotel and Casino near Mettler. County chief

administrative officer Ryan Alsop told me the deal will allow the county to build a joint fire and sheriff's substation near the hotel, hire nine new firemen and 13 sheriff's deputies, pay for a new 110-foot ladder truck as well as 12 new fully equipped sheriff patrol cars. The deal also includes a direct general fund contribution based on a calculation of standard property tax formulas (remember this is an Indian reservation) as well as a six percent room tax. The proposal will go before the Board of Supervisors next Tuesday. 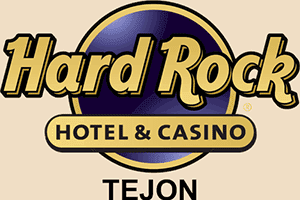 * ... JOSE ARREDONDO: The story of the week has to be the brutal murder of Jose Arredondo, the owner of the Family Motors line of car dealerships and body shops. Arredondo was found dead in his Cabos San Lucas condominium, and there have been conflicting reports about how he died. The first report said he had been stabbed 27 times, yet a later report said only he had been beaten to death. The local Cabo-based newspapers are reporting that Arredondo died of multiple stab wounds. For sure Arredondo was a controversial character, and for years he fought rumors of drug dealing that were never born out to be true. The stabbing - if indeed that is the cause of death - indicates this was no ordinary home invasion but rather it seems the killers wanted to leave a clear message. And that they did. 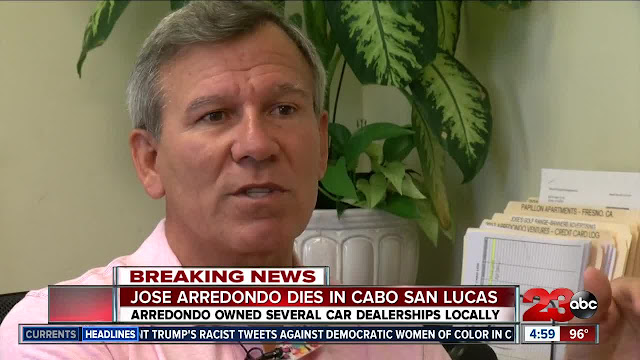 * ... HOMELESS: We should have seen this coming. Just like illegal immigrants, the homeless now have advocates who insist should all get used them them sleeping on our streets. One organization in San Francisco is asking the community to "stand together to protect our curbside communities against hate, xenophobia and anti-homeless behavior." Curbside communities? Read that again and let it all sink in.

* ... BAD FORM: Check out this picture of a family who ran out on a $150 bill at Camino Real Kitchen and Tequila on Stine Road. The cutline on the photo read like this: "Just had a table of 4 walk out without paying a $150+ tab...t hey ordered Rib Eyes, sizzling enchiladas, micheladas....stay tuned for video! Help us identify them and receive a free burrito!" 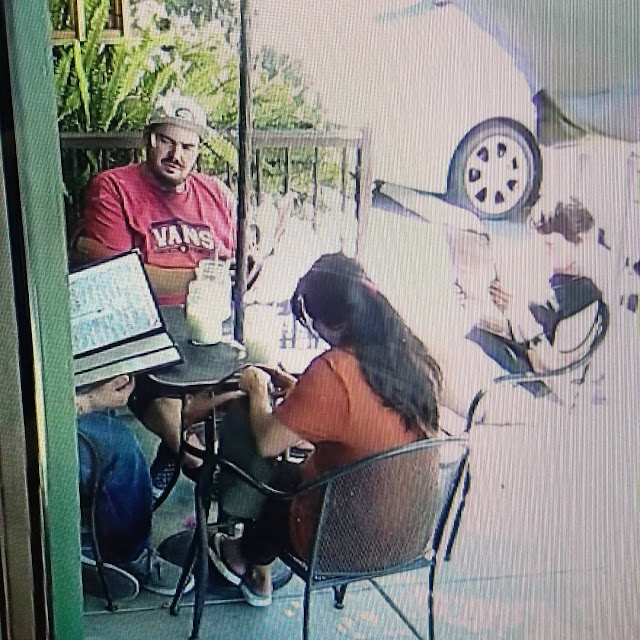 * ... NEWSPAPER RATES: The new owners of The Bakersfield Californian have made their first move, and you are not going to like it. The owners sent letters to all existing subscribers alerting them to a significant rate increase (almost a buck a day) that has already led to a reader backlash. According to the letter (below) the monthly rate is now $29.90, a huge move up for your local newspaper. 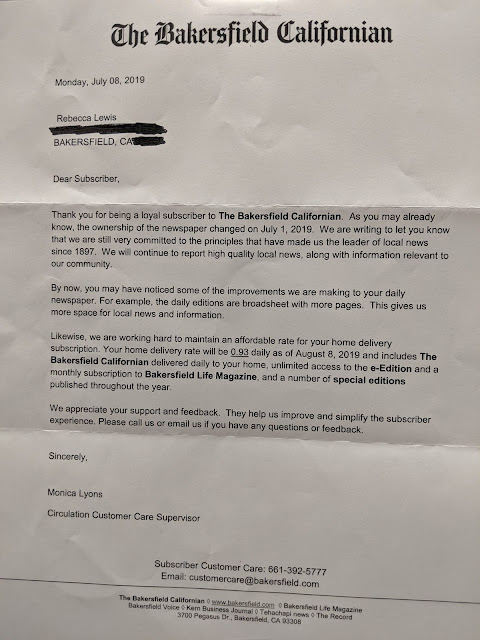 * ... OH INDY: Local author Teresa Adamo will be appearing at the local Barnes and Noble to give a reading from her children's book "Indy, Oh Indy." Adamo will do a reading at 1 p.m. on Sunday, Aug. 4, and she will follow that up by signing purchased copies. 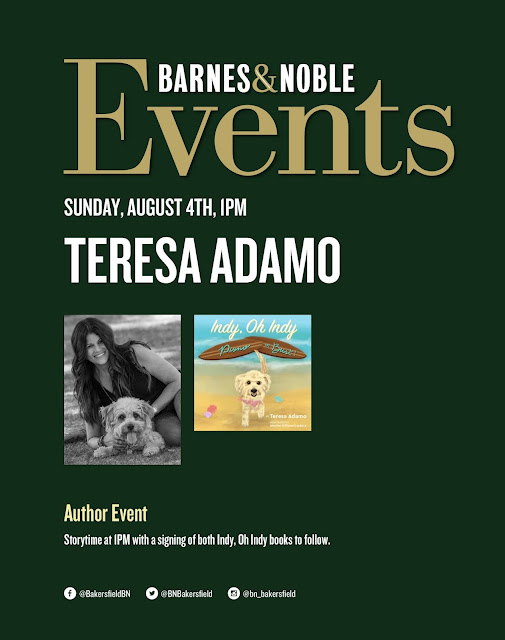 * ... MEN'S SALE: My favorite men's store in California, H. Walker's downtown, is having its annual summer sale. If you are looking for a special gift or a bargain, check out their selection of slacks and ties, shoes, belts, denim, polos, woven shirts, t-shirts, shorts and more.

* ... MEMORIES: Just have to love these old pictures from the Kern County History Fans Facebook page. 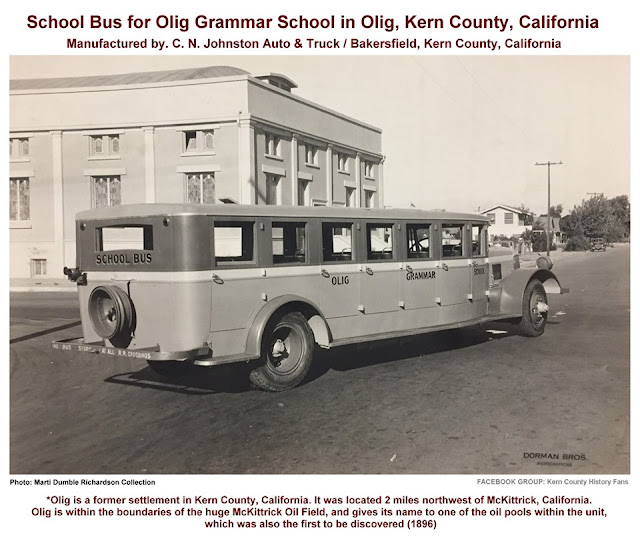 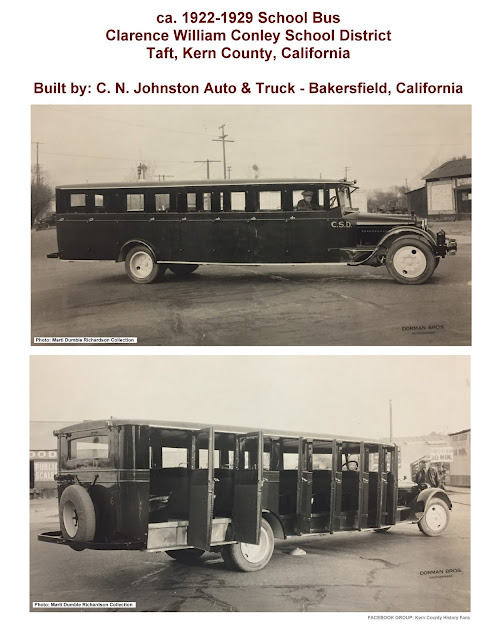 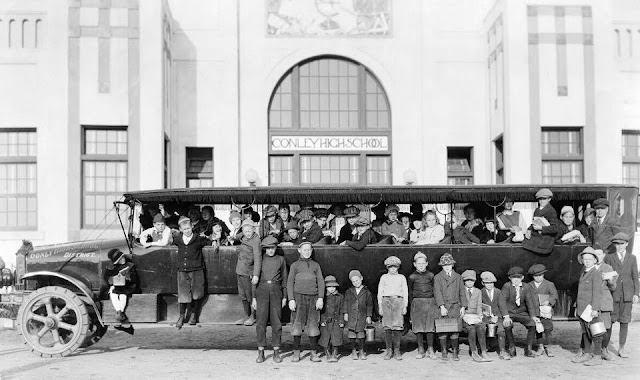 Posted by Richard Beene at 3:30 PM No comments:

Can we please put down the selfie stick and start addressing the homeless problem taking over our community? Plus Monsignor Craig Harrison gets some support at home and PETA and CALM get ready for a radio debate face-off


Welcome to Bakersfield Observed. Our mission is to celebrate life in Kern County by focusing on newsmakers and events and the local characters who make this community such a special place. Send news items to rsbeene@yahoo.com.

* ... HOMELESS: Don't say I didn't warn you, but Bakersfield is well on its way to having the type of homeless crisis that Los Angeles and other larger cities are facing. Just take a look around you: our downtown is literally inundated with the homeless, mindlessly walking in the middle of the street in heavy traffic much like you would see in a zombie movie, setting up camp on a public sidewalk,

urinating and defecating in broad daylight, harassing individuals, stealing from local businesses and leaving trash wherever they go. Sound harsh? It is meant to be, because if our city does not take this problem more seriously, we may reach a tipping point where we will lose the battle. Our downtown is particularly at risk. A leisurely Sunday morning drive downtown reveals mini encampments (six or more homeless) on the east side of F Street across from the old Red Door Furniture, behind the Golden Empire Gleaners, behind Adventist Hospital and on both sides of the Garces circle. Nice, eh? After years of progress that saw the downtown hit its stride in new businesses and developments, it is once again at risk of reverting to a no man's land. I would prefer fewer Facebook selfies by our elected leaders and more action on this dangerous problem in our midst. Is anyone listening? 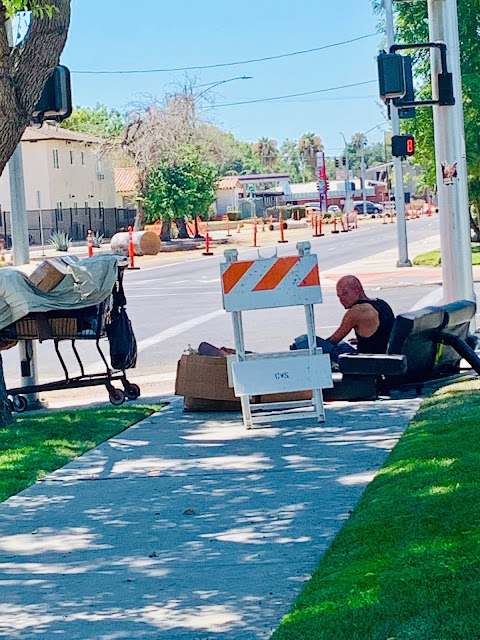 * ... MORE HOMLELESS: I saw this take on a local website devoted to the homeless problem:  "Our business is on L Street and, of course, we’ve had struggles with persons of questionable character, thefts, trespassing, etc. But... I want to warn everyone in the downtown community that on Wednesday evening, I witnessed a woman: Caucasian, thin, with short hair (sides of head shaved), between late 30s to early 40s, light a non-cooking fire at the corner of Golden State and M Street. I confronted her and she ran away with her shopping cart in tow. After calling 911 and returning to the intersection with water, I found three fires burning. What is concerning? She was 'dancing' while holding the burning clothing she lit before throwing it down. The fire department said they would turn the matter over to their arson investigation but until she is located, we should all be aware that she’s out there."

* ... AND MORE FROM FACEBOOK: "I was getting gas at ARCO on 24 Street and a drunk homeless guy was sleeping in between the pumps. Nobody did anything. Nobody except me. I kicked him with my four toes and told him to 'GET UP BEFORE you CATCH FIRE!' The bad ass ARCO girl poured water on his face. He went away!"

* ... MY HOUSE: And sure enough, it doesn't take long for it to hit home. It turns out a homeless person was using my back gate to camp in my alley downtown, leaving behind a Hobby Lobby shopping cart and some personal possessions which we disposed of. 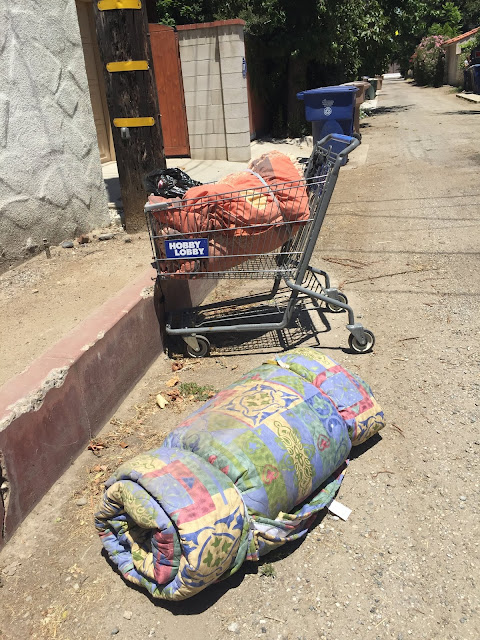 * ... SPOTTED ON FACEBOOK: "A man at the gas station just asked me to take a look at his shorts. He wanted to know if they were too short. I was naive and agreed to give my opinion. He stepped out of his car and they weren’t short at all however you could practically see through them and he had an erection. He then proceeded to ask me what I thought. I answered, 'Ewww.' WTF is wrong with some men?"

* ... CALM VERSUS PETA: The People for the Ethical Treatment of Animals called for a criminal investigation into CALM after the deaths of a few animals, and on Monday CALM and PETA will square off on The Richard Beene Show for a healthy debate. It all goes down at 2:30 p.m. on KERN NewsTalk 96.1 FM. This, as they say, should be rich. 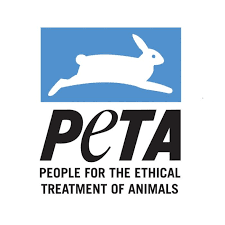 * ... FATHER CRAIG: As we all await the resolution of the accusations of sexual impropriety against Monsignor Craig Harrison, his supporters have found a clever way to express their love for the man: they are putting up signs in their yards like the once shown here. Expect more of these to pop up around town in the days and weeks again. 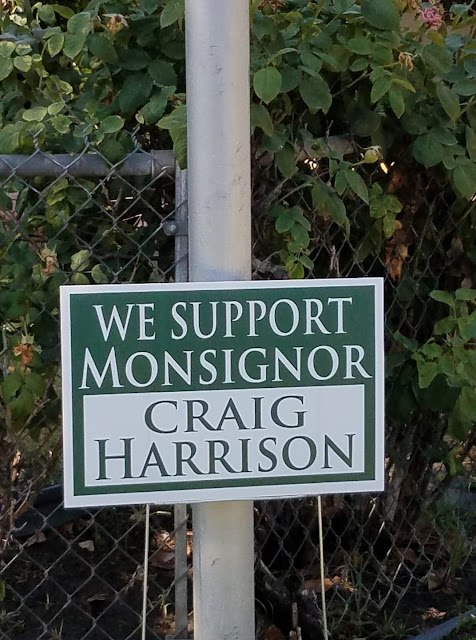 * ... MEMORIES: Check out this incredible picture (from the Kern County of Old Facebook page) showing Charles Lindburgh dining at the old Lebec Hotel on the old Ridge Route. Lindburg is the third person from the right and his wife, Anna Morrow, is seated next to him. 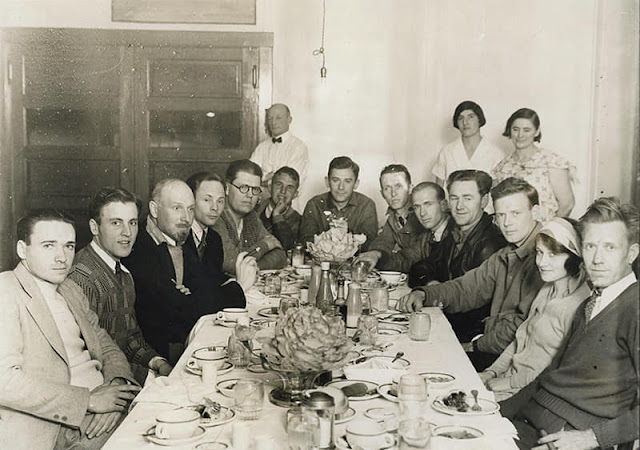 Posted by Richard Beene at 9:34 AM No comments: