* ... MAYOR'S RACE: So now it's down to two in the mayor's race, former homebuilder Kyle Carter and nonprofit director Karen Goh. Both are Bakersfield natives, yet both bear the burden of re-introducing

themselves to the community to earn our votes. Goh is relentless in attending every chicken dinner and non profit event, but that tells us little about who she is, her values, and what makes her tick. Goh is a former supervisor (she was appointed to finish a term and lost to Leticia Perez in an election) and she is widely assumed to wear her political ambition like the scarf around her neck. Carter is the more relaxed and open of the two, yet he too will need to spend more time explaining who he is and why this job appeals to him. Let's hope, over the next few months, we can dig a little deeper into the personalities, views and values of these people who want to be our next mayor. 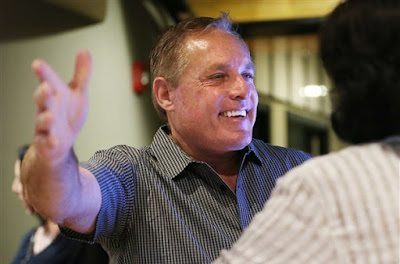 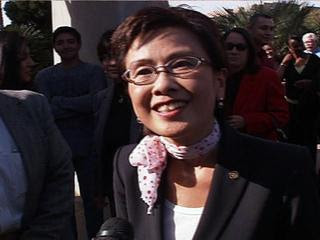 * ... CITY COUNCIL: And now that the June primary is behind us, we can start looking to the November election when one of the main events will pit Ward 2 Councilman Terry Maxwell against challenger Andrae Gonzales. Like others I wish Maxwell would end his Don Quixote-like opposition to the 24th Street widening (sorry Terry, I just don't buy your arguments) but he does play an important role in questioning spending and refusing to kowtow to City Manager Alan Tandy's pet projects. And say what you will about Maxwell, you always know where he stands. Gonzales will position himself as a more thoughtful, younger, inclusive member of the council, and no doubt he be a formidable contender. This is one November race to watch. 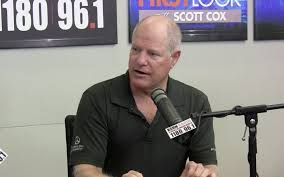 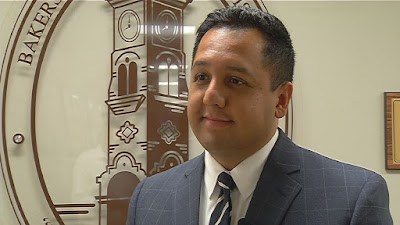 * ... SPOTTED ON TWITTER: "I love when strangers smile at me and I smile back and we have that nice stranger smiling moment."

* ... BAD FORM: A pox on the house of whoever decided to dump their ashtray full of cigarette butts at the entryway of the 24th Street Starbucks. Hey genius, there was a trashcan less than five feet from your car.

* ... OVERHEARD: Outside a local In Shape City are two homeless couples, both with dogs on a rope. One greeted the other with this: "There seems to be more of us every day."

* ... LIBRARY TAX: Local Realtor Ken Barnes had this to say about the defeat of the proposed library tax: "I only wish it were possible for me to face each person that voted against Measure F so I could look them in the eye and ask why they could not afford an extra one penny for every $8 they spend. Shame, shame on all of them."

* ... MEMORIES: Paul Poor shares these memories of being a young man growing up in Bakersfield: "My memories of downtown are summer camp and swimming at YMCA at P and 23rd streets, Vincent’s Cyclery 18th across from post office, Jumbo drive-in on 24th between Union and Golden State, Bakersfield Bowling Academy 24th and Golden State, Farmer Johns Coffee Shop at Union and Golden State, original Lorene’s (24th Street Café), Royal Palms Golf Course Union at Columbus, Stan’s Drive In (Funny Farm) at 19th and Union, Stan’s Car Wash at L and 24th. As ki’s my brother and sisters in the 1960s 1970s we would ride our bikes from northeast Bakersfield to downtown and back again (or catch a ride home with our parents). We were 8 to 15 years old. Those were the good days in Bakersfield."

* ... KHSD: No matter how you feel about the issue of transgender rights, the Kern High School District board of trustees did the right thing in voting to comply with the new - albeit controversial -

law regarding open access to restrooms. Now, with that said, I do believe President Obama erred in not allowing a full national debate on the issue before handing down the guidelines, but that's the way it rolled out and we have to deal with it or potentially forfeit millions of dollars in funding. As for trustee Chad Vegas' decision not to seek reelection because federal law conflicts with this religion, that was the right move for a pastor who believes his personal religious views trump civil policy. Jesse Aguilar spoke to it eloquently: "The board has no authority in deciding which laws the district
will follow and which they will not. If the latter is what some board members want to do, I suggest a run for the state legislature or congress. Please do not use our Kern High students as political hostages for personal, ideological agendas." 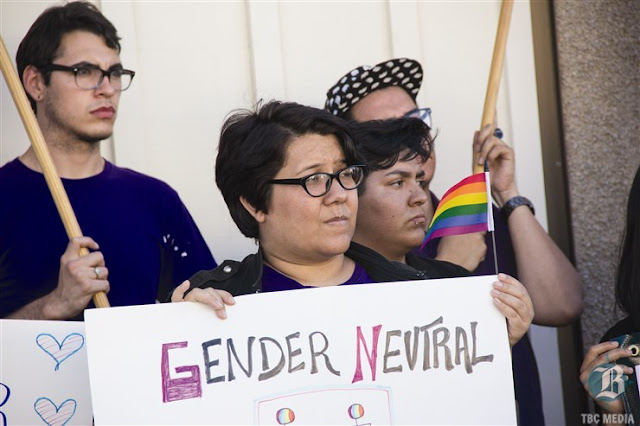 * ... MAYORAL FEE: Did you know it only costs a $25 filing fee to run for mayor? So is it any wonder we had 25 candidates, some well meaning, some a bit odd, some resembling Manchurian candidates and all vying for our attention? Is it time to raise the cost of entry, if for nothing else to attract those who are truly serious about serving our community?

* ... KERO: I ran into KERO TV anchor Tim Callahan the other day, and he introduced me to Jacki Ochoa, his new evening co-anchor replacing Jackie Parks, who left to join her husband in Maryland after 27 years in the local market. Ochoa is a native of California who most recently was a reporter in Seattle. She also worked in Phoenix, Omaha and Redding and is a graduate of the University of Denver. 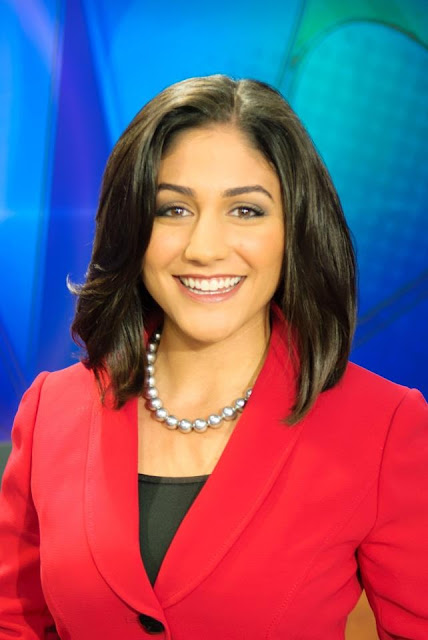 * ... SPOTTED: "Cardigans. Because you don't want to be murdered while pulling a sweater over your head."

* ... SPOTTED ON TWITTER: "I live for those really small but special moments in life, like when I see the waiter bringing my food to the table."

* ... GOOD FORM: Susan Reep wrote to brag about the white-glove customer service she received from Lupe Sanchez, assistant service manager at Jim Burke Ford.  "He told me that he loved reading about the old days and he remembered Krauter’s Nursery on Kentucky Street where he grew up. He said they had lots of animals around there and once they found a big snake in their yard and called Mr. Krauter who came with his forked stick and got it and took it back to his place. "

* ... ICE CREAM: Earle Murie is among the readers who remembers when ice cream came packaged in paper cubes. Said Murie: "I distinctly remember cubed ice cream because my father worked for the Arden Farms Milk Company from the early 1930s to the 1960s when he retired. In 1948 my mother opened a restaurant in Pomona, where we lived and where my dad was assistant manager for Arden. He was excited about the new product his company was promoting: cubed ice cream. So he convinced my mother to include the product in the menu. I was working for my mother at that time, having graduated from Pomona High School in 1947, and experienced the frustration of trying to make a milkshake or iced cream soda from a cube that had to be unwrapped before it could be placed in a container. Needless to say, cubed ice cream did not last long, at least with Arden!"

* ... MEMORIES: Marjorie Poor Payne wrote that her farther was a dairyman who shipped milk to the Carnation plan on Union Avenue years ago. "My other and I plus four to five siblings would drive into Bakersfield to shop and one sibling took piano lessons at Toons Music Studio on Chester Avenue. I remember driving by the big Carnation plan and stopping for a milk shake - always a special treat - and they served food also."

Posted by Richard Beene at 12:12 PM No comments:

Hats off to all those high school graduates earning academic scholarships, a hunter's lament on California gun control and another walk down memory lane

* ... GRADUATION: Hats off to all the high school graduates who have won hard earned academic scholarships to prestigious universities across the country. Kern County has always been well

represented on the athletic front, but we also produce outstanding students known for their academic prowess. And with college tuition steadily rising both for California and out of state universities, these partial and whole scholarships often make the difference between staying or going. So to all these unsung achievers, good luck. 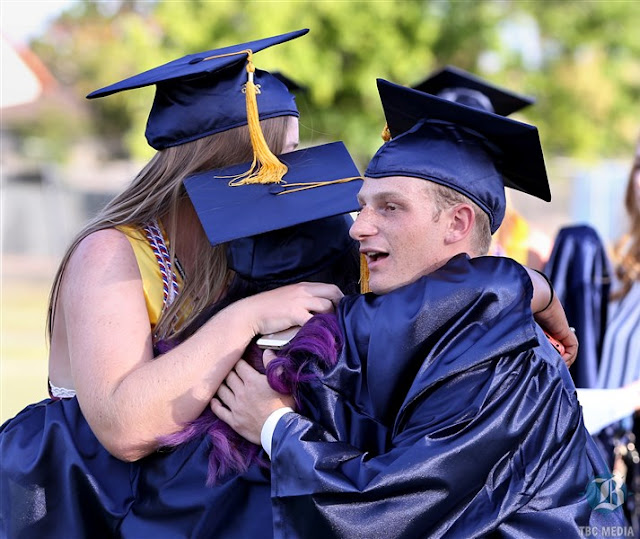 * ... TRASH: Hats off to the city maintenance crews who descend on our local parks to clean up the bottles, trash and sandwich wrappings that so many of us carelessly leave behind after a picnic. Do you think these folks do this to their own homes?

* ... GUN CONTROL: Bud King is a hunter with a clean record, and his frustration over new gun control laws moving through the California legislature is shared by many recreational shooters. Said King: "I am a hunter, a shooter, and a law abiding citizen, but with the new gun laws I will become a criminal. All my rifles whether it is bolt action or semi auto, has some kind of button to release the magazine. It will be just up to the judgment of law enforcement if my firearms bought legally make me a criminal or not.  I know the people coming up with these hare brained ideas would not live in my neighborhood without armed guards to protect them.  People are at their breaking point with their rights being taken away little by little each day. " 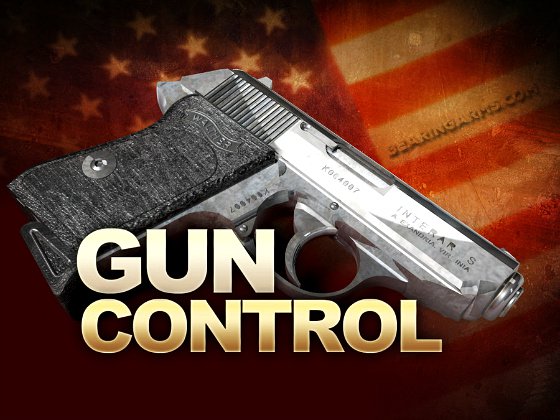 * … SPOTTED ON TWITTER: "The true test of any loving relationship is having two phones and only one functioning charger."

* … MORE TWITTER: "The challenge of modern relationships is proving more interesting than the other persons smartphone."

* ... MEMORIES: It was Susan Reep who started the avalanche of memories about the old Carnation ice cream shop on Union Avenue, and now she shared another memory from her husband Mark Smith. Said Reep: he seems to remember a guy in Mettler in a peanut suit and people along the route trying to attract travelers into their restaurants, which was all very exciting to a 5-year-old kid. And then his parents always took the kids by the big horse and the big shoe on Chester. Such wonders!"

* ... MARY: Howard Polland dropped me a note to recall taking his three daughters to the Carnation plant for ice cream, but he also sent thanks to Realtor Mary Christenson for sponsoring this blog. I thank Mary too, and from my experience, you could not have a better Realtor than Watson's Mary Christenson. 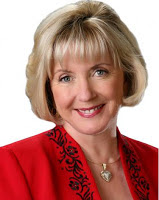 * ... MORE MEMORIES: And lastly, another reader (who requested to remain anonymous) asked if anyone remembers "ice cream cubes back in the 1950s. They were about 2 inches square, packaged in a fold out light cardboard and lots of different flavors. I’ve been thinking they were made by Carnation and at that same plant. But, Peacock was another ice cream plant in Bakersfield and I wonder if any of your readers can help solve this nagging question."

Posted by Richard Beene at 10:52 AM No comments: