Brace yourself for a long heat wave with temperatures nearing 110 degrees, the Starlite Silver Fox lounge unveils its new classic neon sign, and who remembers Peacock Ice Cream from back in the day?

Welcome to Bakersfield Observed. Our mission is to celebrate life in Kern County by focusing on newsmakers and events and the local characters who make this community such a special place. The views expressed here are strictly my own and do not represent any other company or publication.
* ... HEAT WEEK: Remember those balmy evenings last week when the wind was soft and it was perfect to dine outside? Well enjoy that memory because that cooling trend is now officially over, and if there were ever a doubt about what month we are in, just check out the calendar. For the next week, we will see

temperatures around 105 and above, true to the dog days of August that we all know too well here in the valley. 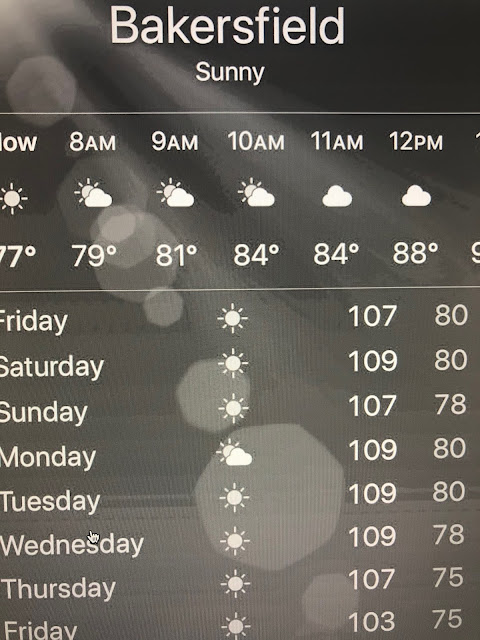 * ... REGISTERED FIREARMS: Ever wonder where your state stands in terms of how many guns are owned by residents? Well, a recent survey based on registered firearms had the answers, and here are the top states with the highest numbers of registered firearms, starting with No. 9 and counting down: Wyoming, Washington, D.C., New Mexico, Virginia, Idaho, Alabama, Nevada, Alaska and Louisiana.
* ... SPOTTED ON TWITTER: "Common sense is like deodorant; those who need it most don’t use it."
* ... SILVER FOX: Well look who is back! The classic Silver Fox sign is back at the iconic watering hole across from Mexicali downtown. Owner Rod Crawford said the original sign was donated to the Kern County Museum and is now on display, so he was forced to have a replicate sign made by a local artist. Crawford and his wife, Julie, also own Pyrenees Cafe, which they have restored to its original grandeur. 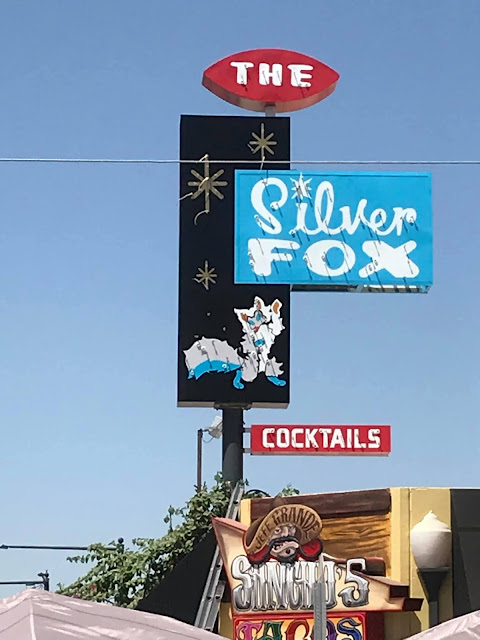 * ... PEACOCK ICE CREAM: Who remembers Peacock Ice Cream? A banner featuring the ice cream showed up in an old picture of a picnic for Standard Oil Co. employees here in Kern County. This picture dates from 1924. Thanks to the Kern County of Old Facebook page for this gem. Word has it that the ice cream company was owned by Wayne Peacock, who also owned Wayne's Dairy back in the day. 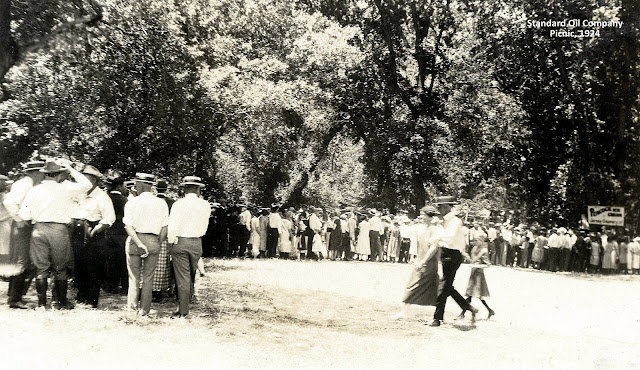 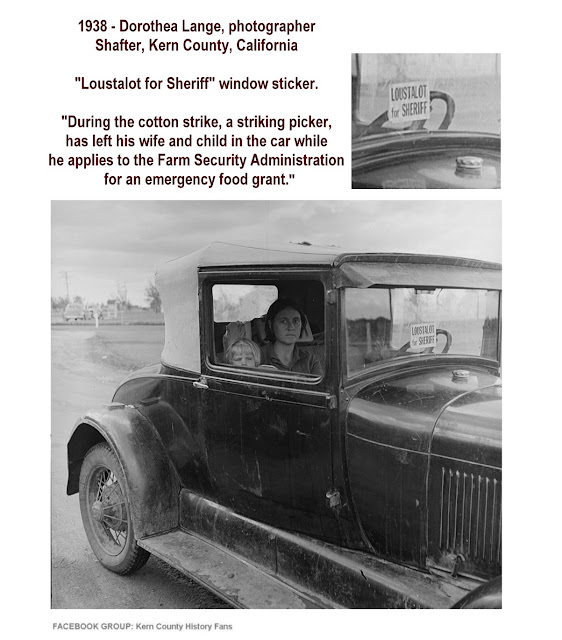 Posted by Richard Beene at 11:02 AM No comments:

Public distrust will be a challenge for any Covid-19 vaccine, a study show asymptomatic people carry just as much of the virus as others, and a local lad turns out stunning custom made knives in Old River


Welcome to Bakersfield Observed. Our mission is to celebrate life in Kern County by focusing on newsmakers and events and the local characters who make this community such a special place. The views expressed here are strictly my own and do not represent any other company or publication.
* ... COVID VACCINE: Public distrust, or at the least public skepticism, could turn out the greatest challenge when a vaccine is eventually rolled out for Covid-19. That's the word from Dr. Brij Bhambi of

Centric Health who noted that in some surveys, up to half of all adult Americans say they will be reluctant to take a vaccine for the coronavirus. "Even the best vaccine can be undermined by the lack of trust," Bhambi told me during a chat on The Richard Beene Show. And given the political nature of this year as we head into the Nov. 3 presidential elections, it seems certain that public distrust may only grow. Stay tuned.
* ... MORE COVID: One of the curious things about Covid-19 is how many people carry the virus but remain asymptomatic. But new research shows that even among those who show no symptoms carry just as much virus as those who become gravely ill. That's the word from a new study in South Korea that offers definitive proof that those without symptoms carry just as much virus in their nose, throat and lungs and those with symptoms, and for almost as long. According to a story on the study in The New York Times, experts believe "that asymptomatic people are unwitting broadcasters of the virus." Dr. Anthony Fauci, director of the National Institute of Allergy and Infectious Diseases, estimated that about 40 percent of the population have no symptoms when they get infected. And yet, they spread the virus like all others.
* ... SPOTTED ON TWITTER: "The guy I use for odd jobs around the house is amazing; in the last month alone he’s repaired a leaky roof, fixed a broken gate, retiled the bathroom and according to the wife it was him that somehow reversed my vasectomy, too!"
* ... CRAFTSMEN: Darin Buoni grew up on a farm in Old River, played in a rock band, shot skeet and dabbled in a number of hobbies like most young people. His latest hobby, if you can call it that, has taken off by storm: he is making custom chef's knives and cleavers by hand, lovingly sharpening the carbon steel blades to a razors edge and attaching beautiful wood handles that are stunning to the eye. While he can't sell them fast enough, Buoni cautions this remains a "hobby" and he has no intention of quitting his day job to devote his life to handmade knives. To hear his story, catch Darin Buoni on The Richard Beene Show this Tuesday at 2:30 p.m. on KERN NewsTalk 96.1 FM.1180 AM. A small sample of some of his knives are below. 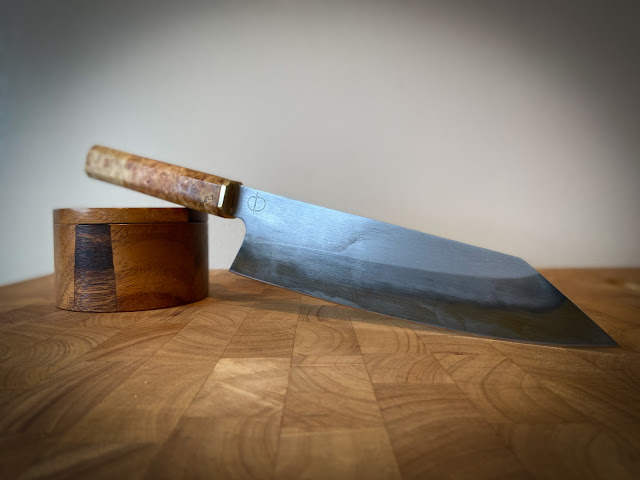 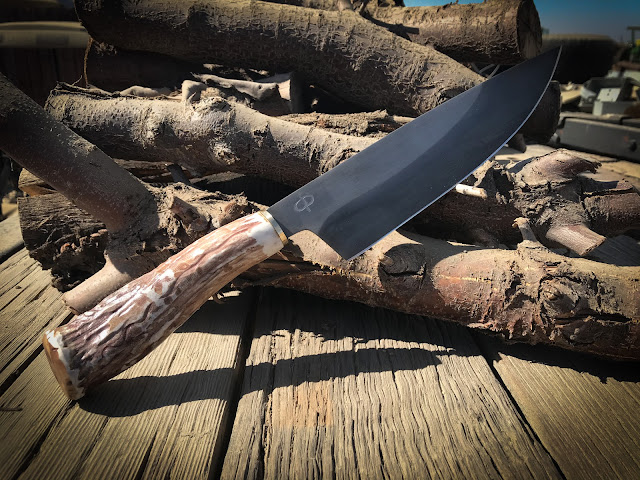 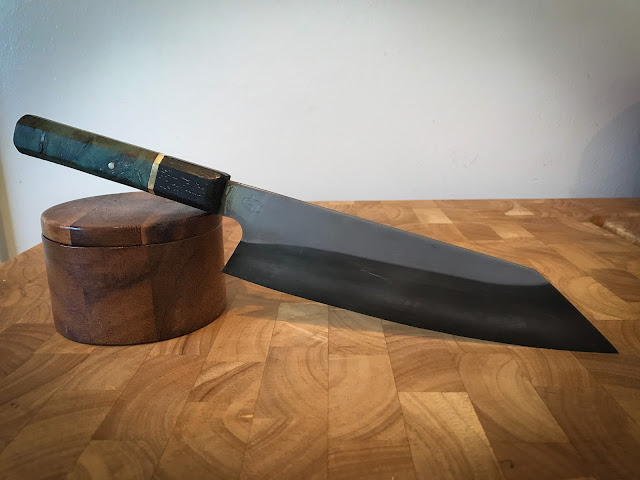 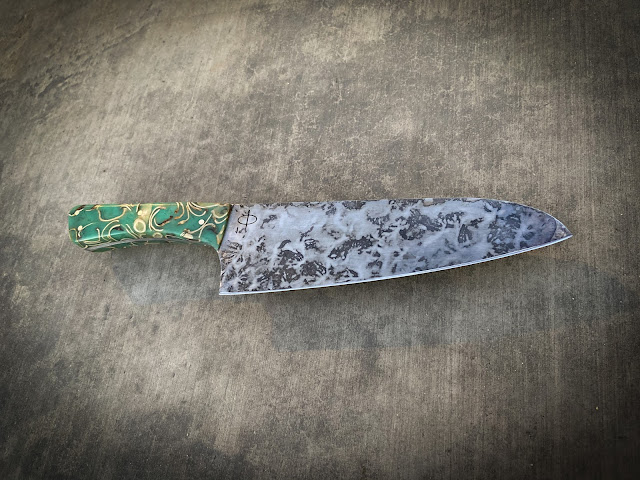 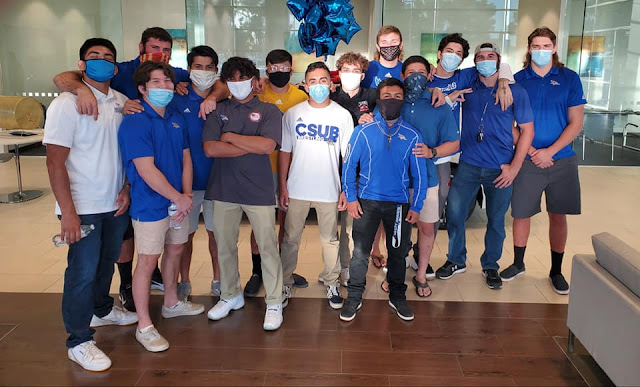 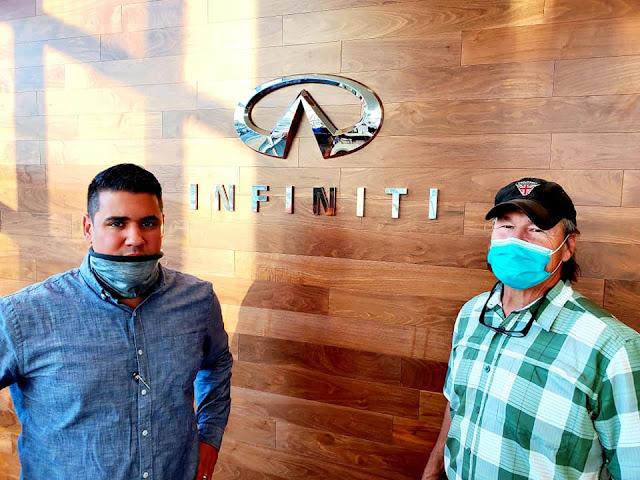 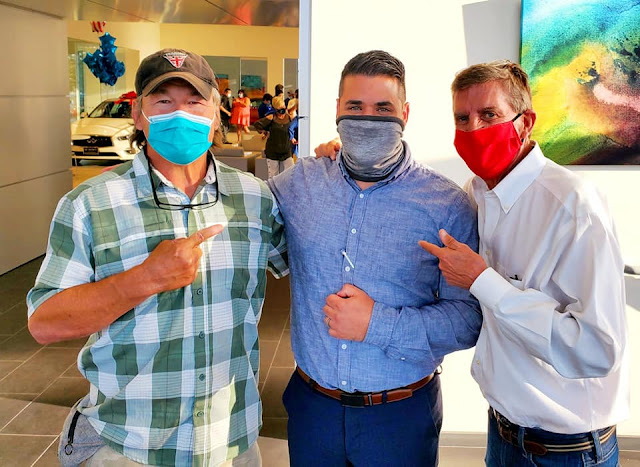 * ... LAKE ISABELLA: Here's an old photo of the Kern River Valley in 1927 before Lake Isabella was added in 1953. Paradise Cove/Southlake at the Base of the Mountain. Kissack Cove would be to the left just out of view. The photo would have been taken around Rabbit Island near the back road to Kernville. 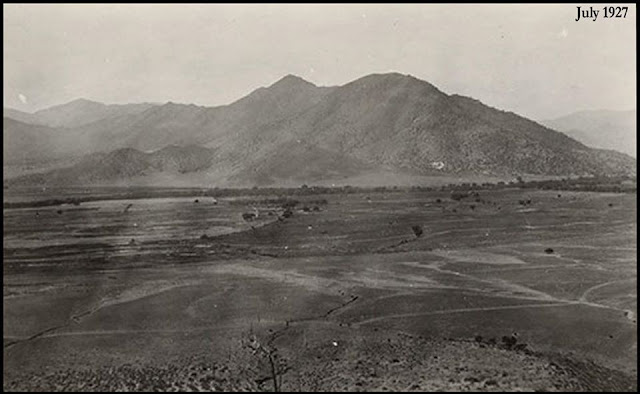 Posted by Richard Beene at 5:48 PM No comments: