The inspirational climb of El Capitan's Dawn Wall, the dynamic growth of the Southwest and Northwest in Bakersfield, and a moving story about a family in need, and those who came to their aid

* … DAWN WALL: The 19-day ascent of El Capitan up the Dawn Wall certainly captured our

attention, but I was more impressed with how climber Kevin Jorgeson described it in an interview with Matt Lauer on the Today Show. “Tommy (Caldwell) and I have been thinking a lot about what is it about this climb that is capturing everyone’s attention. I think the opportunity is for everyone to find their own Dawn Wall, if you will. We had our project that we saw through to the end. What’s yours?” (photo courtesy of Time Magazine) 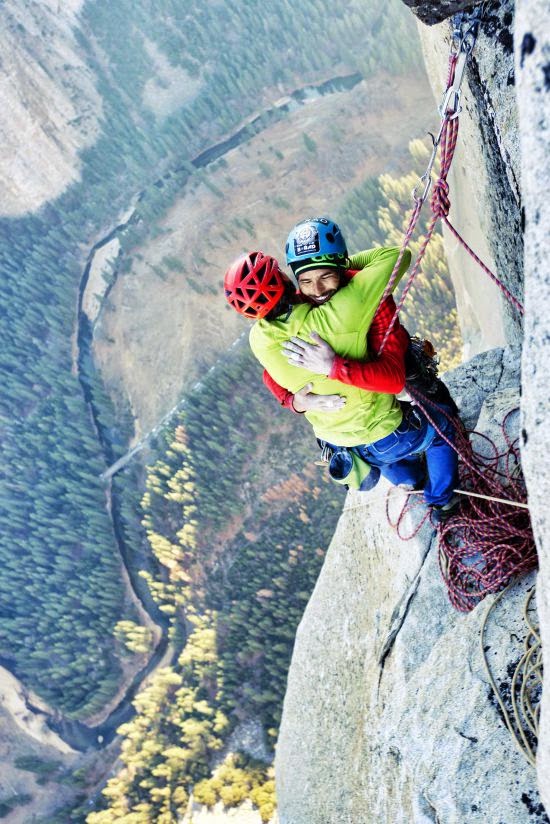 * … GROWTH: Bakersfield is a city of quadrants: most of us identify ourselves as living in the Northwest, Southwest, Northeast, Southeast or downtown. For the most part we spend our non working hours shopping, playing and driving in areas close to where we live. I was a Southwest resident for years and for the last five have lived downtown. Which is why I was stunned (that is not an exaggeration) when I spent some time in the Northwest earlier this week, amazed at the growth, the number of new businesses and restaurants and yes, traffic. Likewise, I returned from the coast the other day and entered the intersection of Gosford Road at Panama Lane precisely at rush hour. And once again, the sheer volume of new businesses, housing, schools (and yes, traffic) was amazing. We may feel like a small town, but that's now a nostalgic memory from the past. 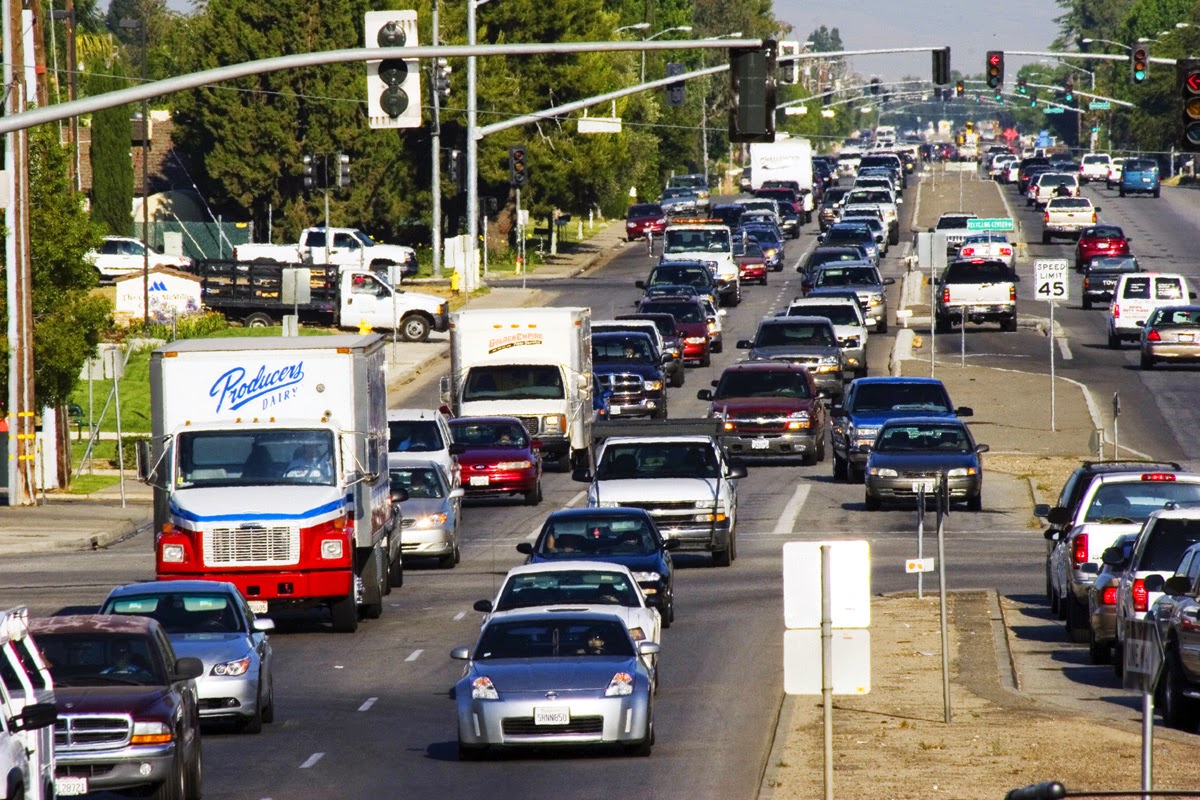 * … KINDNESS: This note from reader Jacqui Sickles will be a tad long but it moved me in a powerful way. I will let her speak: "This past Monday afternoon I was coming home from town and turned off at Goodmanville Road and there was a young couple with a flat tire along side the road.  I saw the young mommy with child in her arms trying to get cell reception. I stopped to ask if she was successful and if someone would be a long soon. She and her husband said they had left messages and hoped for the best. The young father had recently changed the tire and had no spare or anything to jack up the car with. I told them I would go get my husband and some tools. It was beginning to get cold outside, but they also had an infant in the car and wanted to stay with the vehicle. We were able to jack up the car and decided instead of waiting to see if anyone would show up to help we made the decision to drive to the tire store and buy a tire. Having nine grandchildren ourselves it was hard to see those babies out in the cold. My Husband said we might be closer to Oildale, but I said let's go to Clerou’s.  We left the family about 3 p.m. We arrived at Clerou’s and Louie came out to meet us. My husband informed him that we were helping some kids out off Alfred Harrell Highway and they were waiting on us with babies too. Louie came out within minutes and said I found a tire for you.  My husband went to pay for the tire and Louie said, no if you are doing a good deed for someone, then I can do it too! Moments later a young man at the tire shop brings out the newly mounted tire and off we went to deliver to the kids. I looked over and my husband had been crying. I'ts amazing how many wonderful people we have right here in our community. Thank you Clerou Tire Company. We will send all our business your way. The young family could hardly believe it either! They were all smiles as they drove away. Not too bad at all." 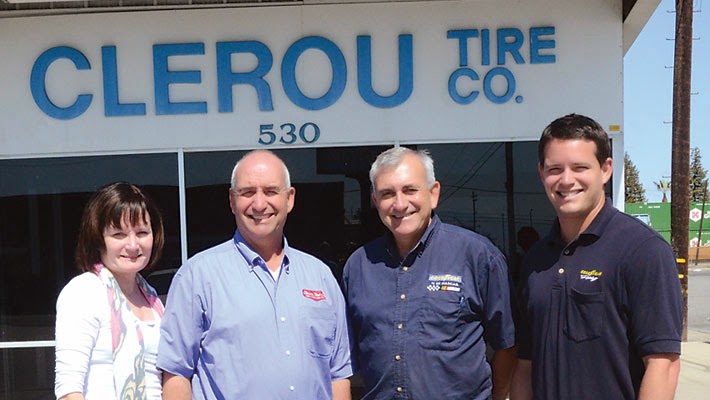 * … RETIREMENT: Hats off to Donna Hollingsworth, who is retiring after 23 years with the AltaOne Federal Credit Union. Donna has been active in a number of local organizations, including the Kern County Hispanic Chamber of Commerce and the American Lung Association. She is being replaced by two people, Christopher Lowe and Jessica Davidson at the Ming Avenue and Riverwalk locations.

* … CAR DEALERS: Geraldine Sproul wrote to add some names to the list of long gone car dealers. "If you really are an old timer you would think ofAdams Motor Co. (Pontiac) on 24th Street, S. A. Camp Motor (Dodge and Plymouth) on G Street, Kitchen-Boyd (Lincoln and Mercury) on Chester, Morris Motor Co. (Studebaker) on 24th, Motor Center (Chevy. Buick and Cadillac( on Chester, Thrasher Motors (DeSoto) on Chester. The Nash dealer was Kitchen and something on H Street."

* … BAKERSFIELDISM: You may be a Bakersfield old-timer if you"picked out your first Schwinn bicycle in the basement at Vincent's."
Posted by Richard Beene at 2:17 PM No comments:

Are the tax increases designated for public schools going to teacher pensions instead? And lots of news on the local restaurant front as two new eateries get ready to open

* … PENSIONS: I probably shouldn't be surprised by this, but half of that $6 billion tax increase sold to us by Gov. Jerry Brown to support public schools is instead being diverted to bolster the teacher pension system. That's according to a column inThe Wall Street Journal which quoted a taxpayer advocate as saying that no matter what local politicians tell voters, "when you see tax increases, think pensions." The piece concluded: "Remember that 'temporary' tax hike for California schools? Most is now going to public worker retirements."

* … FOODIE: Lots of things going on on the food front. PizzaRev, a Southern California-based chain of more than 21 make-your-own pizza parlors, opens this week next to Buffalo Wild Wings on Gosford Road. For a flat fee of $8.25, you can enjoy an 11-inch pizza with all the toppings you want. The chain also offers salads, desserts and eventually beer and wine.  A second PizzaRev will open soon at the Park at River Walk. Meanwhile Sprouts Farmers Market, which bills itself a mini Whole Foods, will also open at the Park at River Walk on February 25. 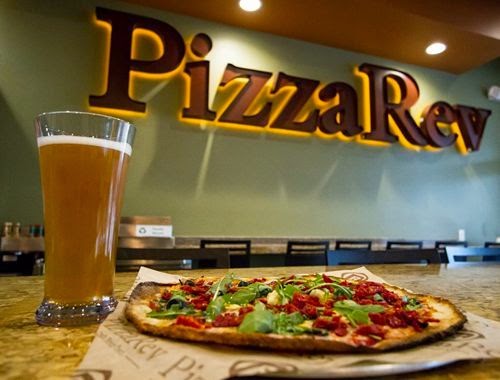 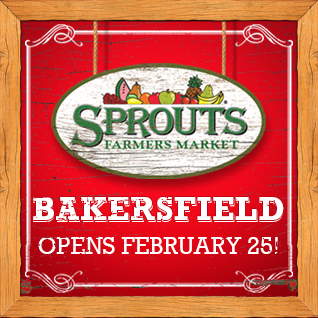 * … TABBY: With a move recently I was forced to change veterinarians, and thanks to some recommendations from friends, I ended up seeing Dr. Eric Boiller at Stierns Veterinary Hospital. When your pet is like family (and aren't they all?) you set some high expectations for their care. Minus a few teeth, my 9-year-old grey tabby came through with flying colors thanks to Boiller and his attentive staff. 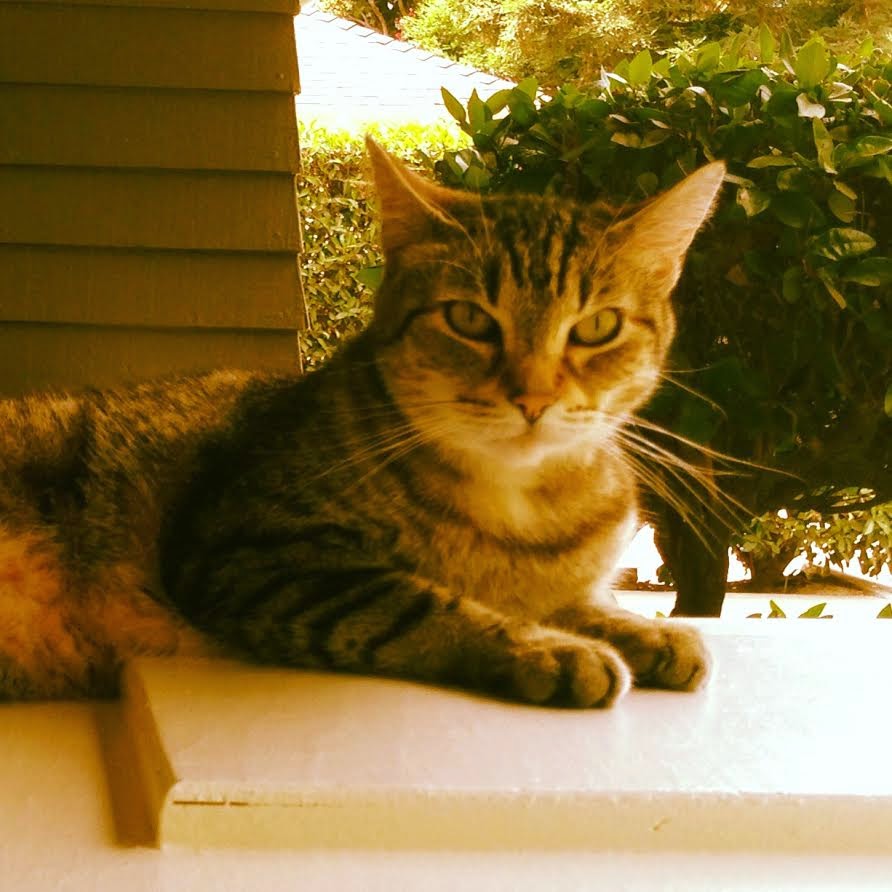 * … SPOTTED: On social media was this chuckle: "The phrase 'don’t take this the wrong way' has a zero percent success rate."

* … RICKOVER: Proud U.S. Navy and submarine veteran Gene Bonas passed this along: "Thought your readers would like to know that a nuclear attack submarine will be named after the father of the nuclear Navy, Admiral Hyman Rickover.  The Virginia class attack submarine will bear the name USS Hyman G. Rickover SSN 795. Previous to SSN 795, the service named a Los Angeles class attack boat, SSN 709, after Rickover  Secretary of the Navy Ray Mabus stated Virginia class subs will  provide the Navy with the capabilities required to maintain the nation's undersea supremacy well into the 21st century because of their enhanced stealth, sophisticated surveillance capabilities and special warfare enhancements that enable them to meet the Navy's multi-mission requirements."

* … BAKERSFIELDISM: You know you're from Bakersfield "if you have ever offered someone a Dewar's chew from a bowl on your coffee table."

Former Bakersfield High Driller and Seattle Super Sonic Robert Swift arrested on robbery charges in Seattle, and my pick eatery of the week goes to the newly remodeled Pyrenees Cafe

* … SWIFT: It's hard to think of things getting worse for former NBA star Robert Swift, but they have. In case you missed it Swift, who graduated from Bakersfield High and went to the NBA straight out of high school, was arrested in Seattle on charges of attempted robbery. In November, was busted on drugs and weapons charges and lost his home to foreclosure. Seattle media reported that Swift, who stands at 7 foot 1 inch, admitted he was a heroin addict. Swift played for the Seattle Super Sonics and the Oklahoma Thunder before his life went into a downward spiral. 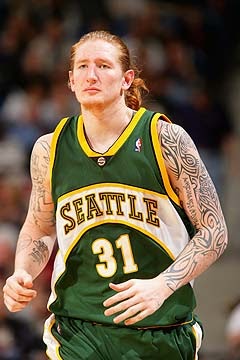 * … PYRENEES: My restaurant of the week goes to the Pyrenees Cafe, which has been smartly remodeled by new owners Julie and Rod Crawford, who also own Narducci's just a block away. The bar has been spruced up without losing its Basque character and the dining room is adorned with some wonderful photos of Bakersfield from the 1890s, including a huge photo of a parade at the intersection of Chester Avenue and 19th Street. The food, classic Basque, is excellent. By the way, I goofed last week in saying that the new eatery Narducci's North Beach downtown was owned by the Crawfords. Different ownership. 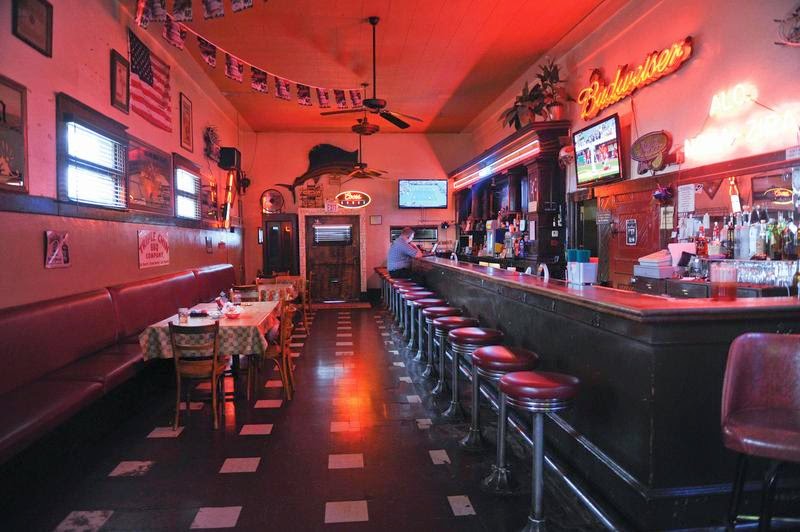 * … SPOTTED:  On Twitter there was this bit of wisdom: "I’m suspicious of people who don’t like dogs, but I trust a dog when it doesn’t like a person."

* … PHOTO: Gene Thome, owner of Bear Mountain Sports, spotted a yard sale sign on a local telephone pole in the Northeast and posted the picture on social media. The sign read: "Going to Jail Yard Sale… Coke 50 cents." Only in Bakersfield. 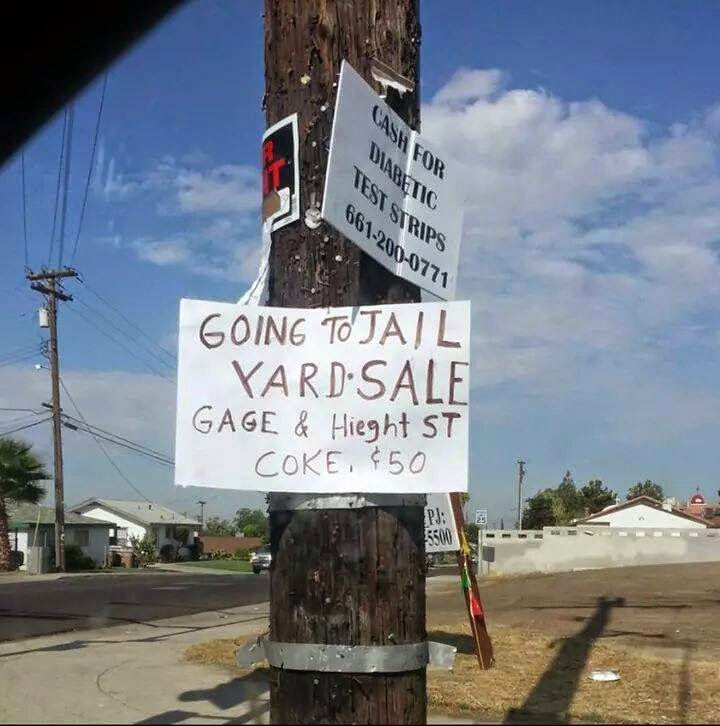 * … GOOD FORM: This note came from a woman who only wanted to be identified as "an impressed senior citizen." She said: "Kudos to Serena Perez for her good deed today. The Highland High School freshman walked her bike through University Park after school today until she found the owner of the parked car with its door wide open and lights on. The owner was with her children at the play structure. I'm sure Serena prevented a theft and a dead battery. Good citizenship at work!"

* … SERVICE: I experienced some top flight customer service this weekend when a technician named Brian from J. Noble Binns Plumbing took care of a cranky tankless hot water heater. He was  efficient and patient enough to give me a clinic in how these things work.

* … BAKERSFIELDISM: You might be from Bakersfield if you "bought your first car from Wally Tucker Datsun, Bill Wright Toyota or Haberfeld Ford."

Posted by Richard Beene at 10:51 AM No comments: