* ... EARTH DAY: An interesting note from Stephen A. Montgomery on Bakersfield College’s

Garden Fest held on Earth Day. "(It) sort of implies a concern for the environmentalism and sustainable living. Yet in the face of long term concerns about the health affects of sugary beverages on diabetes and weight and now new concerns about the health risks of artificially sweetened beverages the BC Culinary Arts food concession sold sodas for a buck and charged $2 for water! Food consisted of pulled pork sandwiches or hot dogs with salty chips. Healthier options? Not here. Hello! Are we a little tone deaf?"

* ... OVERHEARD: At the Starbucks downtown a man is complaining to his wife: "Starbucks has become like United: crowded, horrible service and uncaring."

* ... SPOTTED ON TWITTER: "Siri pronounces Spanish street names like a white guy in a Hawaiian shirt ordering in a Mexican restaurant."

* ... GOOD FORM: "Last Tuesday my husband and I went in to Walmart on Gosford to shop for our Vegas snacks. We were in a hurry so we went through the 'self’ checkout line and upon checking out we (received) cash for $100.  We left the store and once inside the car we realized we didn't collect our $100 from the cash dispensary. We ran back into the store and the family behind us were still checking out. The lady noticed the look on our faces and asked if we were looking for our $100 cash. We told her we forgot to collect it and she proceeded to tell us she turned the money in to a Walmart clerk. It's so awesome that there are still honest people in Bakersfield! We did try to compensate her $20 for her honesty and she refused to take it. So we paid it forward in Las Vegas!"

* ... MEMORIES: Here's one more memory of Maison Jaussaud's from Richard Stricklen, president of the Motor City Auto Center. "For many years, the Bakersfield New Car Dealers' Association held their monthly lunch meetings at Maison Jaussaud's. In the late 1960's I was absent for the annual election of officers meeting and was informed the following week that I was elected president. I was 23 at the time and got a call from John Barber saying, 'See kid, that's what you get for being a no-show.' Also in that era, the hit singing groups, 'The Four Seasons' and the 'Leland Four' performed at Maison Jaussaud's several times. The Jaussaud family had a knack for attracting the very top entertainment." 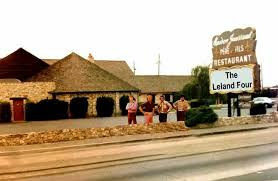 * ... MORE MEMORIES: And there was this from reader Phil Foster: "My father Les Foster and his brother Lawrie Foster came to Bakersfield in 1929. My father formed a dance band and played the Crystal Inn, The Beardsley Ballroom, the La Granada Ballroom (where City Hall annex is today), The Barn in Oildale, The Bakersfield Inn, The El Tejon Hotel, (where the Bank of America Tower sits today). They taught music for the Phillips Music Company on 19th Street and had many
students of music in the 1930s and 1940s. Footnote: the Crystal Inn is now the Basque Club on South Union Avenue."

* ... CRYSTAL INN: Finally, Gail Oblinger was in high school in the 1950s when the Crystal Inn was popping. "It was always crowded with couples dressed up… girls in pastel colored formals and boys wearing rented  tux on prom nights.  hey served meals late into the night, so you could attend the dance and go out to dinner afterwards. I felt very special to be all dressed up and going to a such special place with my date. I had been told me a time when I had to be home, no exceptions. One such evening, the service was a bit slow due to the crowds. I was directed to a dimly lit  back office by the waiter, when I asked if there was a place I could phone home. My mother understood about the dinner crowd and extended my curfew. As I was starting to leave, a man I hadn’t noticed before, got up off the couch and came staggering towards me, I guess he had been drunk and sleeping it off, but it sure gave me a fright. I didn’t tell that part to my mother, for fear she wouldn’t let me go another time."
Posted by Richard Beene at 9:55 AM No comments:

Wednesday Bako Bits: a trip down memory lane with Maison Jaussaud, Saddle and Sirloin and that time when the Shah of Iran stopped by for some food and libation

* ... MEMORY LANE: My mailbox has been full with notes from readers about a walk down memory lane. Today's blog is a tribute to just that. Enjoy.

* .. THE BLUFFS: Supervisor Mike Maggard wrote to talk about the early days of Panorama Drive and the bluffs, so he turned to his mother Neta to remind him of a story told by his late father Bill. "Around 1951-1952, there used to be an air strip along the bluffs near the cemetery. Mom remembers the gas station at the corner of River Boulevard, and the liquor store next to it to the east, but few if any homes were in the area. No bar, as far as she recollects. Anyway, the airstrip was used by 'brave' young east side car enthusiasts to stage drag races. My father raced there often and when he began courting my mother during her senior year of high school, she would hop into the front seat of his “flat head ’40 Ford” with him and they would drag race up the runway. When he and his buddies, who we called the 'Original Brat Pack' (Bill Maggard, Bob Martin, Jack Saba, Bob Peabody and Eddie Wright) were a bit younger, they used to play football in the center median on Beale, near the corner of Quincy."

* ... MEMORIES: The recent posts about the elegant old Maison Jaussaud's restaurant triggered this memory from Gary Crabtree: "Along with the Saddle and Sirloin, there used to be another small restaurant called the Crystal Inn, I believe located around South Union and Planz Road. It was a small place with great food and top notch entertainment. I remember my parents taking me to dinner there for my 10th birthday. The entertainment was a piano player and a female singer named Margaret Whiting who was about to explode on the national recording scene. I’d be interested if anyone else remembers the Crystal Inn." 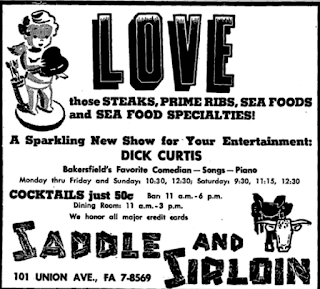 * ... MORE MAISON: Ronal Reynier brought some historical content to Maison Jaussaud (JoSo's) with this missive: "It was built by my cousins Martin and Babe and yes the Shah of Iran was there for lunch. I believe it was in the early 1970s. Martin and Babe's cousin Henri, from France, worked as maitre d'. It was his day off but they had him come in. The Shah must have enjoyed his
lunch; he gave Henri $1,500 to be divided by the staff on duty and today it would be equal to a $9,500 tip; Henri's tip was a nice Rolex watch. People from the French Embassy stopped for lunch at JoSo's twice a month when traveling between San Francisco and Los Angeles. They left a $300
tip each time. I have no idea why they traveled by car and not by air; maybe just to eat lunch at JoSo's." 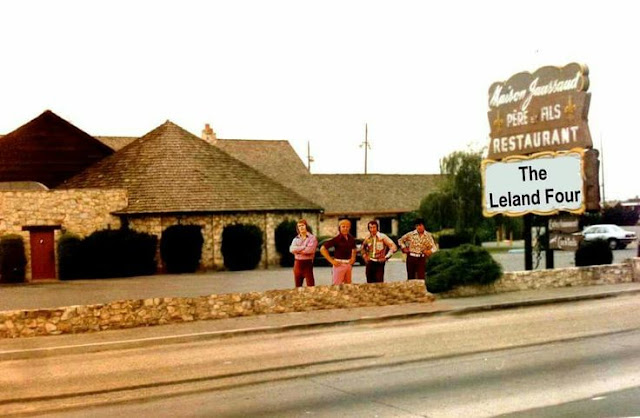 * ... FAMILY TIES: And if you wanted more proof, check out this note from Gary Jaussaud,  son of one of the brothers that founded Maison Jaussaud's."I can tell you first had, in fact the Shah of Iran and his group did in fact have lunch at Maison Jaussaud’s during that period of time. I remember because I was there and saw it with my own eyes. Two things I remember the most is, once our chef found out they were coming he went out and bought all kinds of interesting items they might like, and when it was said and done, the Shah wanted an American hamburger. The second thing was, the U.S. security team with the group, paid for the lunch with a federal check, as the Shah was the guest of the United States. The event realty happened, so you can tell your readers, you got the information from the source." 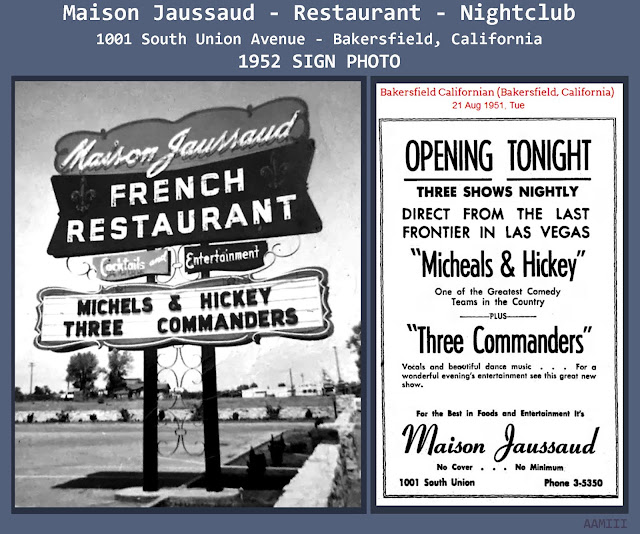 * ... MORE MAISON: And Hank Webb chimed in with this memory: "I was home on leave from the Navy wherein I was a navy hospital corpsman. As a treat for my 21st birthday,  my brother-in-law, Denny Haynes, who was later finance director for the city of Bakersfield, my sister Elizabeth, and my mother Benita took me to Jaussuad's to see Sally Rand, the world famous 'fan dancer.' She was an ecdysiast, aka a stripper, who used two huge ostrich feather fans in her act. At one point Ms. Rand exposed larger quantities of her physique than my mother could tolerate, so she tried to put her hands over my eyes and cried out, 'Oh don't look!"'I calmly replied, 'It's ok momma, I'm a medical man.' Thus making me one of my family's enduring jokes."

Posted by Richard Beene at 9:59 AM No comments: