Remembering Betty Ann Ong, and a warship built in her memory 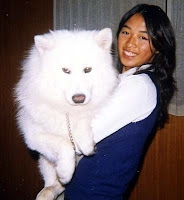 We're approaching the eighth anniversary of 9-11 but time has not healed the scars and the sadness that terrible day left on our nation. Time marches on, politicians bicker and it seems some even forget, but for most of us the day the Twin Towers fell is seared in our memory. So it was interesting to get an email from Ed Herrera, brother-in-law of Betty Ann Ong, one of the American Airlines flight attendants who died when AA Flight 11 from Boston to Los Angeles was hijacked and diverted into the North World Trade Center Tower. Ed's wife (and Betty's sister) is Cathie Ong-Herrera, a Bakersfield resident who has since established a foundation in her sister's memory. Ed passed along a note about the USS New York, an impressive new warship built with 24 tons of scrap steel from the World Trade Center. Said Ed:

"This is a touching story of how deeply we were impacted by 9-11-01. My wife, Cathie Ong-Herrera, lost her sister on that day and unlike other losses 9-11-2001 will be relived every year as well as it should be, but it's a continuing grief which many don't understand. They say get over it and move on... I say just be understanding."

According to the Betty Ann Ong Foundation website, Betty Ann (shown here from a picture taken from the Foundation website) was the first person to notify American reservation agents of the hijacking, and she stayed on the phone for a full 23 minutes, calm and professional. Her final words prior to the crash were: "Pray for us."
Posted by Richard Beene at 5:00 PM

Of course the events of 9/11 were horrific all the way around.
But I remember that day well and I remember thinking what it would be like to be on one of those planes.
The people in the buildings didn't know what was about to hit them.
But the people on the planes did. Not only did they know they were about to die, they knew their plane was about to kill possibly thousands of other people and they could do nothing to stop it.
I can't imagine a more terrifying and helpless feeling.
It'd be impossible to "get over it and move on" if I had a loved one who'd had to go through that.

I doubt that they knew that the plane was about to hit into the skyline. It was chaotic in that plane to the point where many didn't know what was coming next.