Short takes around town: from a brazen home invasion to college decision week

The story of the day today has to be the brazen home invasion robbery in Stockdale Estates. We all know the dangers that come with a prolonged recession: joblessness, desperation and hopelessness. But some of the stuff happening now just seems out of bounds for our community, which has always prided itself on being a relatively safe place to live. The details are still sketchy, but what we do know is that two young men walked through an unlocked garage door Sunday, found the man of the house and stuck a 9mm pistol to his head. They then used extension cords to tie up both the husband and wife. This happened on Calle Torcido off Ming and Gosford in virtual broad daylight during dinnertime. Thankfully no one was hurt and police arrested two suspects - both from Los Angeles - and one had a loaded 9mm handgun. Is it any wonder that more than 4,000 folks in Kern County have legal concealed weapon permits? Or that gun stores report a huge spike in business. (see previous post here) 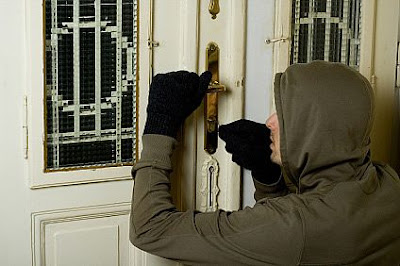 What's the lesson here? Keep your garage doors closed, your doors locked and your alarm on both day and night. And keep an eye out for your neighbors.
Other tidbits around town:
* Heard that David Perkins, the marketing manager over at Urner's Appliances, is on the mend after a scary two-week respiratory illness. Dave tells his friends on Facebook that "I'm back!" and is looking forward to seeing everyone. Good to hear he's on the mend.
* Amy Powell-Smith has taken a job over at the San Joaquin Memorial Hospital Foundation. Amy formerly worked at the Kern Community Foundation.
* This is decision week for kids to decide on what colleges they will attend. Lots of exciting news out there and I'll have an update on some of those decisions in the next week or so. Always good to hear when smart kids do so well.
* Lastly, college-age kids will start returning home in the next several weeks. It will be good to see so many of these kids after a year away from home. Expect to catch up with them at Luigi's, Woolgrowers and other favorite dining spots.
Posted by Richard Beene at 3:30 PM