McCarthy's test: making next week's healthcare town hall meeting inclusive and based on facts, not emotion. Let's avoid the circus

As we head closer to next week's town hall meeting on health care reform, it occurred to me that Rep. Kevin McCarthy has a golden opportunity to rise above the circus-like atmosphere that has characterized other such meetings. The town hall is set for next Wednesday, Aug. 26, over at the Icardo Center at Cal State Bakersfield, and already more than 800 people have confirmed. There is little doubt that this will be an overwhelmingly conservative audience in tune with the market, and it's safe to say that most attendees are already dead set against any reform. Consider, for example, some of the responses the congressman got when he put out at feeler on his Facebook page. Some excerpts (with occasional spelling errors corrected):

"Guess what... the government will now choose what treatment is best (if any) for you. Also you will have to wait for critical care i.e. transplants. That's why so many Europeans and Canadians come here for treatment. I'm sure if you are rich enough you can hire a private doctor like in Europe or bend over like the rest of us working folks. Stop frivolous court action, lower doctors insurance costs and give them more money to take Medical and such patients.

"I have an idea on how to "reform" health care... illegals do not get free care. That would save loads of money and would discourage illegal immigration. Think about it, when the government gets involved in things the system bogs down. Ninety percent of the problems we as a society have would be better solved in the private sector.

"Well first things first. I think that it is only legal for an Immigration Officer to ask if someone is illegal or not. And for the papers and documents to prove it. Second.

"Kevin - Why is the majority party insisting on a program that won't work and we can't pay for? Are they brain dead? 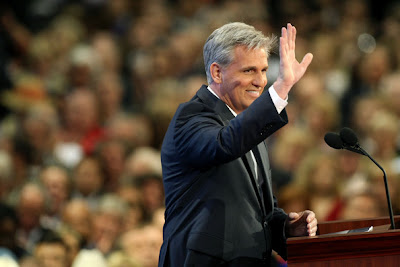 These kinds of comments are reflective of the feedback McCarthy has been getting, and they are certainly representative and valid. It would be easy for this thing to turn into a GOP love fest like a "tea party" of sorts, but that really doesn't serve the public interest. McCarthy's challenge will be to create an environment where both sides are welcomed and Democrats and those who support health care reform (and there are a few in town) feel comfortable enough to show up and speak their mind. Let's hope he does so. (Photo of McCarthy at the last GOP convention courtesy of Getty Images)
Posted by Richard Beene at 11:16 AM

Ha! If you expect this to be anything but a one sided shouting match you're crazy. Your boy Kevin is going to put on his Mr. Conservative suit and cater to the extremes. Just watch him!

Thank you Mr. Beene for your rational and calming comments on this issue. I hope Mr. McCarthy takes them to heart. When the discussions begin next week, I hope these items will be discussed: (1) Our current system is broken. I understand some people may not like the ideas being proposed, but what are they suggesting, instead? The current system bleeds employers with ever-increasing health care costs. Doctors spend too much time on paperwork and fighting with insurance companies. Our system is employment based, so if you lose your job, you cannot easily get coverage (unless you land another job and have no pre-existing conditions, or can afford COBRA). Why should someone's employment status determine whether they or their their kids can get care? (2) There IS such a thing as private health insurance in places like Britain. Unlike some of the information going around, not everyone has to stand in a queue for treatment there, but there is a safety net so everyone has access to care. (3) If our present system is so good, why are other industrialized countries not clamoring to have one just like it? (4) Stop the fearmongering that a new system will ration health care. We already have rationed health care in this country. Don't have insurance? The level and amount of care you can expect is rationed. For those with insurance, their care is rationed, too: they are restricted to the physicians they can see and the procedures and medications they are allowed to have, even if a physician deems them medically necessary. Yes, there is an appeal process, but I can say first hand I would never wish anyone to have to battle for payment or treatment the doctor recommends when fighting a serious illness. (5) Stop with the idea that someone is going to send grandma to the president's death panel. A certain former governor has promoted this idea as truth. Do you really think that a president who has just lost his own grandmother (and has his childrens grandmother living under the same roof with him) would propose such a thing? Note to Ms. Palin: the plan being discussed is being proposed by members of Congress, not the President, so there is no such thing as an Obama Death Squad, and saying it over and over will not make it so. (6) I understand many don't want people who are here illegally to have access to health care. But if those undocumented people or their kids have a communicable disease (measles, swine flu), wouldn't you rather have them immunized than exposing you to an illness? // // So, Mr. McCarthy, let the event begin. I look to you to be a gentleman that I know you are to set the tone for discussion. Please stop those of any political persuasion who do not treat others with respect, who equate opposing ideas to Nazi-ism, and who denigrate an adult discussion about a serious public policy issue to the level of a fifth grade school yard. Oh yes, and if you oppose the plan being debated, please tell us what you are proposing as an alternative.

Thanks for a very thoughtful and complete post. I hope some (or all) of these issues are explored in a sober manner next week. Question for you: do you plan on attending? Would you feel uncomfortable about attending?

Mr. Beene, I am the one of the "thoughtful and complete post." Thank you. In answer to your questions, no I will not be attending and yes, I would feel uncomfortable doing so. Why? I simply look at the motivation of the organizers. Mr. McCarthy has already come out in opposition to the plan being discussed. More than 800 people want to attend. The conduct of some participants in other such events nationwide is simply intimidating. It would be nice if a similar situation would not happen here, and I would like to be pleasantly surprised if does not. Unfortunately, it is a sad commentary on the current level of debate on this issue that it would occur to you to ask me those questions in the first place. Thank you again for your post today, for your call for calm and I, too, hope a circus can be avoided.

Thanks, "thoughtful and complete"--great post! I would like to add that none of the versions of the bill contain any language suggesting that undocumented or "illegal aliens" will be getting free healthcare. Simply not true.

Also, if we could gather enough "thoughtful and complete" thinkers, or at least open-minded individuals, the local town hall might have a chance of being something different than what we have seen previously in other events. However, as I posted in an earlier comment, I think Rep. McCarthy would have to make that happen by inviting local healthcare leaders who are willing to speak honestly about their views on reform.

While I am realistic about the political views in Kern, such a dialogue could potentially be educational for our community.