* ... THE DRAMA AT GARCES: Whatever is going on over at Garces Memorial High School isn't pretty. A lot of alumni and supporters are up in arms over the resignation of football coach David Fanucchi (some claim it was forced) and the demotion of his older brother, Vince Fanucchi. The Fanucchis (third brother John is school president) are virtual institutions at the private Catholic school and it's hard to envision a school year without the Fanucchis in charge in some way. Add to that the sudden resignation of swimming coach Bill Potter and it just adds to the intrigue. So what is it? A purge? Or simply a changing of the guard? The buzz around this community institution is hot, emails are flying and some longtime supporters are threatening to withhold their support, which is considerable. Honestly, I'm not sure I really want to know the inside dirt. Rather, I hope this  storm passes and the school returns to its roots of providing a quality private school education for our local kids. I did hear the school's annual barbeque last week was a huge hit, and that's a good sign. My take: let's hope cooler heads prevail and some form of explanation comes from the diocese to calm the alumni. Garces is a community institution that is too important to put at risk.


*  ... JEAN FULLER'S DECISION: State Rep. Jean Fuller addressed the downtown Rotary club last week but didn't reveal much about  her political future. Fuller, who represents the 32nd Assembly District, will either run for a third and final Assembly turn or make a run for the state Senate seat that Roy Ashburn is vacating. One thing was certain: Fuller seems to have grown in the job and impressed the group with her grasp of the issues, particularly regarding the water crisis that is of so much concern to valley farmers. She was accompanied by aide Dana Culhane, daughter of Holly Culhane, owner of PAS Associates.


* ... 90 CANDLES FOR URNER'S: Urner's Applicance Center is one of those Bakersfield institutions along the lines of Dewar's Candy Shop, Woolgrower's and Luigi's. Is there anyone in town who hasn't purchased a refrigerator, TV or washer and dryer from these guys? So it's worth noting that Urner's, still family owned after all these years, is celebrating its 90th birthday. And they are doing it in with style. On Friday, Oct. 9, principals from Urner's will gather at the Bakersfield Rescue Mission to replace all the mattresses in the men's and women's dormitories with new Tempur-Pedic mattresses. In addition, they'll donate two 60-inch home theater televisions. This is why supporting family owned businesses like Urner's is so important. These are our neighbors, not  some faceless corporate bureaucrat from Arkansas. The company president is David H. Urner, son of the founder, and Steve Illingworth (grandson of David E.  Turner) serves as vice president. 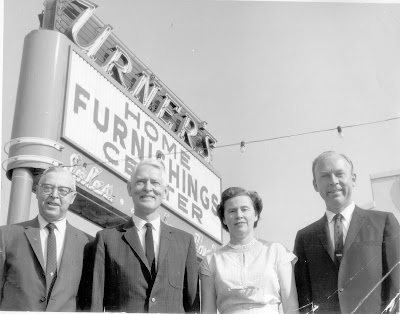 Urner's opened its doors on September 1, 1919, as Home Appliance Co. during a time when "modern appliances" were sold mainly in hardware stores. Urner's now also specializes in big screen televisions, sofas and mattresses. Over the years the family has been generous to such groups as the CSUB Foundation, the Bakersfield Symphony, Memorial Hospital House of Hope and Teen Challenge. (photo by The Californian)

Posted by Richard Beene at 1:14 PM

Isn't Garces more than a "private" high school and is, in fact, a Catholic school?

So coy! Anybody in town can tell you what the real story is about the Garces shifting of positions, and certainly you do, too, given your vast network of school contacts. One doesn't even have to know these folks or have children who attended the school and one hears exactly what went down at the school.