Short takes around town: The generosity of Marv Steinert and a rescue dog finds a home in Bako

* ... THE GENEROSITY OF MARV: How would you react if  you awoke virtually blind? One day you are healthy and productive and the next you're facing total darkness. If you're like me, you'd likely spend far too much time wallowing in self pity and asking "why me?" Which is why the story of Marvin Steinert is so amazing. Marv is the local businessman who is suffering from an illness known as "temporal arteritis," a rare condition that causes inflammation of the blood vessels to the head, and it has left him blind. (read the previous post here) But instead of withdrawing, Marv is spending his time keeping in touch with the community and having family members read him the newspaper and other publications. Marv is a longtime active member of the downtown Rotary Club, and when his son read him a club bulletin about Memorial Hospital's drive to build a 60-bed children's hospital, he responded by writing a check for $50,000 to support the effort. (read the full Memorial story here) Marv apparently wants the money to go to the new PICU (pediatric intensive care unit) which is all part of the big drive by Memorial CEO Jon Van Boening to give our community a children's hospital so our ill kids don't have to be sent north to Fresno or south to Los Angeles. Folks who know  Marv are not surprised by his generosity, but given his own health challenges, this gesture is simply awe inspiring.

* ... BART HILL'S GRACIOUS EXIT: At last week's downtown Rotary meeting Bart Hill, former CEO of San Joaquin Bank, took the floor microphone and made a gracious speech thanking the community for the support all these years. Bart was accompanied by his wife, North Carolina-born interior designer Napier, and pulled no punches in talking about the demise of San Joaquin and the last-ditch efforts by board members to save it. He had only nice things to say about Citizens Business Bank, which took over San Joaquin in a state and FDIC operation on Friday, October 16. Bart said he plans to stay in the community and will likely look for work after taking some personal time off. Bart has served on a number of nonprofit boards around town, including the Tree Foundation of Kern and the downtown Rotary, and he will continue to serve as a director on my board at The Californian. He received a standing ovation.

* ... GOING FROM BAD TO WORSE: The latest report from the Great Valley Center held no surprises, but it's a depressing read nonetheless. According to a story in the Visalia Times-Delta newspaper (read the story here), the Valley Center says indicators like poverty, foreclosures and joblessness are up, and they aren't likely to get better anytime soon. "We think the timetable for economic recovery in the Central Valley is going to be slower than the rest of the state," said Amy Moffat, the center's director of research. "Overall, poverty and unemployment are high. There is a deficit of good jobs while the general population and those seeking jobs continue to grow." Kern County's grim statistics speak for themselves: a dreadfully low percentage of college educated adults, a staggeringly high adult illiteracy rate (nearing 25 percent for the entire county) and one of the highest high school dropout rates in the state. So dig in, it's going to be a long slow crawl back to what we once viewed as normal. 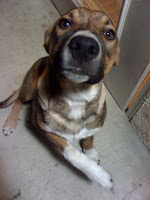 *  ... RESCUE DOG FINDS HOME: The problem with abandoned and abused pets in our community has been well documented and is tragic beyond words. How many times have you cringed watching the stray dog meandering lost through traffic on Ming Avenue or Chester on your way home? So I was happy to read on Facebook that Jim Pappe, a software specialist at Lightspeed Systems downtown, rescued an abandoned dog while on his way home Friday. Jim is a bicycle commuter and found the dog tied to a fence off the bike path. In his words:

"He is very gentle, attentive, well-kept. No collar nor tags, just a leash. When I first saw him, he was tied up as if someone was coming back for him after their run. When I came back 4 hours later, it was dark and apparent something was amiss. I posted on Craigslist to see if someone just forgot to pick him up. I'm hoping not..."

When Jim went back to check on the dog at 9 p.m. Friday, he found him huddled and afraid. He finally had to coax him out and spent some time just sitting with him before untying him and taking him home. Early Sunday Jim told me the dog had warmed to his wife Debbie and their children, spent a quiet and restful night and took a nice walk around the  park near his Southwest Bakersfield home. Now that's a happy ending.

Posted by Richard Beene at 5:48 AM

Jim Pappe should be commended for rescuing this dog. It's appalling how awful some people treat their dogs in this town. Or they buy them as extensions of their own idiotic personalities.

What a lucky dog. What a good man. Three cheers for Jim Pappe and his family.