* ... TATUM'S COMEBACK: Behind every fund raiser and worthy cause there are a thousand inspiring stories. One of them belongs to Tatum Holland, a high achieving youngster who was diagnosed with cancer when she was just 15 years old. Today, six years cancer free, she is a lively, intelligent, healthy 22-year-old student at Sacramento State making her parents proud every day. Tatum, who graduated from Liberty High School, overcame a rare form of bone cancer that led to chemotherapy and surgery. She is one of the reasons that her father, Greg Holland, and his team over at Coldwell Banker are sponsoring the "Relay for Life Wine Tasting and Auction" fund raiser. It will be held this Saturday (March 13) from 4 p.m. to 7 p.m. at Motor City Lexus on Gasoline Alley to benefit the American Cancer Society. There will be plenty of wine (featuring 25 Central Coast wineries) and food so pick up your tickets at any Coldwell Banker office or at Imbibe Wine and Spirits on Truxtun Avenue. Proud father Greg  told me: "We have seen first hand what this disease can do and we have also seen how God works in the lives of those people affected by this terrible disease. So thank you very much!" Tatum's mother, Janet Sanders, and step mom Stephanie Holland are both deeply involved in cancer fighting and fund raising efforts. (Tatum is shown in the picture below.) 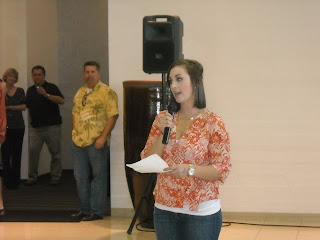 * ... ROY'S SAGA:  Nobody should take any joy in the drama surrounding state Sen. Roy Ashburn, the conservative Bakersfield legislator whose arrest on DUI charges in Sacramento (after leaving a gay night club) led to his "coming out" as a homosexual on the Inga Barks KERN Newstalk radio program. There's a deep sadness to all this, if for no other reason than one can only imagine Ashburn's pain in dealing with his sexual identity. Which is why I thought it was piling on when Pastor Chad Vegas told Barks that Ashburn's admission was a "perversion... a sin ... a corruption of Roy." I'd prefer to let Roy work this thing out himself without playing moral judge and jury. Pastor Vegas and others should remember what my late mama always told me: "Live and let live."

* ... DECISION TIME: It's that time of year when high school seniors all over Bakersfield are getting their acceptance letters or emails from colleges around the country. Some of the most popular local choices - UCLA, UC Berkeley and USC - won't be heard from until early April. These are stressful but exciting times for both our kids and their parents. My advice: enjoy these special moments because you wake up, and your children are gone. Seems like just yesterday that my youngest was at Christa McAuliffe Elementary in Marsha Ketchell's class and today she's wrapping up her sophomore year at Michigan in Ann Arbor. If you'd like to share where your sons and daughters are going to college, shoot me an email and I will compile a list.

* ... GAUCHO COCKROACHES: Speaking of universities, one of my work colleagues is reporter Gretchen Wenner, who has some deep roots at UC Santa Barbara. Not only did she graduate there, but her father is a retired UCSB biology professor. One of her favorite memories was the live collection of giant African cockroaches her father kept at the portable biology trailer, housed in plastic garbage cans that he would put on counters so the janitors would not accidentally trash them. Her parents, by the way, met at the University of Michigan. "So there's Wolverine and Gaucho blood there," she said. That's some good heritage.

* ... BAKERSFIELDISM: You know you're from Bakersfield when "You know the ingredients in a George's Special and you have had a 'Black and White' for lunch."

“Family Values” California state senator representing Kern County, Republican Roy Ashburn (guess how he votes on gay issues?), goes to a gay bar near the Capital, picks up a scantily clad buddy, gets drunk, drives and receives a DUI. In my opinion the Republican Party has been taken over small portions of the republican party of “birthers, baggers and blowhards” (people who love to push their beliefs on others while trying to take away rights of those they just hate) and that’s who they need to extract from their party if they real want to win. Good Luck, because as they said in WACO, “We Ain’t Coming Out”. They are good at “Follow the Leader”. They listen to their dullard leaders Beck, Hedgecock, Hannity, O’Reilly, Rush and Savage and the rest of the Blowhards. The world is complicated and most republicans (Hamiliton, Lincoln, Roosevelt) believe that we should use government a little to increase social mobility, now its about dancing around the claim that government is the problem. The sainted Reagan passed the biggest tax increase in American history and as a result federal employment increased, but facts are lost when mired in mysticism and superstition. Although most republicans are trying to distant themselves from this fringe they have a long way to go. I guess Ashburn is the first on the list “2010 Republican Summer of Love”. Remember last year list of “2009 Republican Summer of Love”: state assemblyman, Michael D. Duvall (CA), Senator John Ensign (NV), Senator Paul Stanley (TN), Governor Mark Stanford (SC), SC Board of Ed Chair, Kristin Maguire (AKA Bridget Keeney). Do I hear Tammy Wynette, “Stand By Your Man” playing in the background? I remember not so long ago that other Orange County song favorite, “Stand By Your Tan” (for Tan Nguyen). But that’s another Orange County fool.

Great post, Richard. I appreciate your comments about Mr. Ashburn.

Re: Tatum Holland--It's great to get an update because I remember when she was diagnosed/in treatment. Having lost a teen son to cancer, I know the ravages of treatment for the disease in kids. I am grateful every time one of them is gets past it and is moving on with life.

Here is the shining light to this story in my book.

If it is true that Roy voted the way he felt his district would have wanted him to vote (on gay issues), he has earned credit in my book. The reason we send people to Sacramento should be that this person can be a voice for the people of his/her district and put their own opinions and lifestyle aside. If he truly did this, it seems it would be a first.

We have someone that was gay and voted against gay issues because this is the way the majority of this district would have wanted him to vote. When he votes, it is not HIS vote, but rather the vote of the people of his area. How many others in political leadership do you see that vote against their own thoughts and lifestyle to bring to the floor the voice of their district?

Just because a member of leadership is gay, a minority, or has strong views of their own, I expect them to represent the view of their district and not their own views. Voting for a person because we like their views on matters is very backwards, but seems to be the way we do things. Voting for someone that can convey the views of the district and be a voice for the people is the smart move. This is the primary responsibility of the job.

Kudos to Ashburn for, on this issue, putting his lifestyle aside and voting for his district. Now if he could have only done this with the Feb. 09 tax increase.

He drove drunk, throw the book at this sinner or any sinner who drives drunk. And yes, he is a degenerate with his body, soul and mind. There is nothing else to work out Mr. Beene. How ridiculous "live and let live" sounds in this situation. Should DUI killers "live and let live"? His debasement of his body will come to his personal ruin, but to risk others well being is unacceptable. Grow up and stop pushing your liberalism and morality which is the equivalent of a high school moron.