* ... READER SOUNDOFF: Reader Brian Landis responded to an earlier post with these thoughtful comments. "I can't hold my tongue anymore. A woman mentioned in your blog last week that she's sick about hearing about Bakersfield kids going off to college, or words to that effect. My wife and I were locals who went away to college and returned home. All my life I heard from my oilfield working grandfathers, 'You get your butt a college education, boy! You can do better for yourself.'  Eventually I did get that education graduating from Santa Barbara's other college, Westmont College, after graduating from, Highland High in '90.  My wife had no choice about going to college since her grandfather was superintendent of Lost Hills School which now has the middle school named after him, A.M. Thomas. She was class co-valedictorian at East Bakersfield High '86. She is now an attorney here in town. I am now a 8th grade history teacher at Curran Middle School. Getting an education is one of our nation's great opportunities and is a must for our Republic to function. My grandparents didn't have much, especially during the Depression. But what they did have instilled a desire to do my best, to learn, and make a better life for myself and my family. I'm sure you can paraphrase something to that effect." Actually, I could not have said it better. Thanks for writing.

* ... ART WALK: If you're looking for something to do this weekend consider the Walk for the Arts, a Saturday morning stroll through downtown to support the arts. It begins at 8 a.m. at the Betty Younger Sculpture Garden on Truxtun Avenue between Chester and L Street and ends at noon at the Rabobank Arena Pavilion. Count on lots of live music and awards and free entry to all the galleries and museums. The Arts Council of Kern is putting it on and there is a $10 day of the event sign up fee. 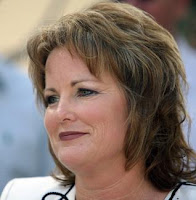 * ... SHANNON GROVE: Heard that retired Bakersfield College football coach Dallas and wife Mary Grider hosted a neighborhood party to “Meet and Greet” Assembly candidate Shannon Grove earlier this week.  Mary, who works at Rabobank, said this was the night the "wind kicked up and all the colorful umbrellas in the back yard blew over but the party moved in doors when Shannon talked about her positions on many hot issues." Among those attending were Bob and Lani Wattenbarger, Richard and Teddi Fanucchi, Katy Valentich, Chad and Camille Grider, Paul and Claudia Milazzo, Bruce and Cheryl Biggar, Chris Champness, Dr. Paul Ansolebehere, Amber Grider-Turner, Charles and Joan Lortz, Dr. Gary and Kathy Williams, Doug Wattenbarger, Cathy Abernathy and Jim and Fawn Antt ( former California State Real Estate Commissioner), who asked Shannon if she had thick skin and could withstand the brutality in Sacramento.

* ... BUCKEYE BOUND: Greg Hanel, a senior at Stockdale High School, is headed to Big Ten powerhouse The Ohio State University to study aeronautical engineering. He's senior class president, swim team captain and an accomplished bassoon and alto saxophone player. In fact, he teamed up with his sophomore brother Dan to earn a command performance at the California Music Educators Association State Solo and Ensemble Festival this past week in Sacramento. Dan plays the trombone. Parents Mary and Greg Hanel credited Stockdale band director John Biller and the school's music program for encouraging their boys to succeed.


* ... BAKERSFIELDISM: You know you're from Bakersfield when "you've actually offered someone a Dewar's chew from the bowl on your coffee table."

Brian Landis misses the point. It's great that these kids are going to college, and we should all wish them success whether they return to Bakersfield or strike out for elsewhere. But thousands of Bakersfield kids go to college every year, and only those with parents in prominent positions merit a mention in this column. And these kids (and where they work) are taking up limited space in a thinning newspaper. I don't subscribe to the Bakersfield Californian to read about where rich kids are going to college. I subscribe to read about Kern Health Systems and San Joaquin Bank and the county Supervisors and Alan Tandy.