Bad form on our bike path and one man's quest to chat with Bill Gates ...

* ... BAD FORM: Another glorious weekend and Bakersfield was at its best with red white and blue flags and bunting adorning homes all over town. I celebrated with a long bike ride out through the Famosa Road vineyards, only to return to town to encounter a nasty crash of a cyclist on the bike path near Mohawk and Truxtun. Turns out the cyclist was going much too fast for the path, lost control going around a runner and went down hard. Wanna-be "racers" need to recognize that while it's a bike path in name, it's really for mixed use and is no place to "time trial" with your pals while weaving through pedestrians going 20 mph or faster. It's bad form and dangerous. If you want to ride like Lance, do it with one of the many groups of hard core cyclists who would be happy to take you out of town on the roads and leave you humbled.

* ... DEAR BILL: A local business owner is on a quest to meet Bill Gates, or at least get him on the phone. If that seems odd, you'd have to know Dave Plivelich, local owner The Marcom Group and an active member of the downtown Rotary Club. Plivelich recently returned from India where he participated in the ongoing Rotary program to eradicate polio. He was so moved by that effort, and Gates' pledge of matching Rotary's efforts with a $300 million grant, that he has launched an unusual effort to get Gates on the phone. He wants to share his experiences and thank Gates for his generosity. Plivelich has posted an "open letter" to Gates on his company blog and asked others to spread the news. Consider it done, Dave. Let us know what Bill has to say.

* ...RADIO RACHEL: It was nice to see local radio personality Rachel Legan profiled in the July edition of BakersfieldLife magazine. Rachel teams with her brother Dustin as morning hosts for KGFM 101.5. She's one of our community's true good spirits, a down-to-earth confidant who genuinely cares about this community and its people. She also hosts what I believe to be one of the funniest gigs in local radio, reading posts from the "missed connections" on Craigslist, a hilarious assortment of postings from local folks looking for love. On a personal note, she told the magazine her best piece of advice was from poet Maya Angelou while on Oprah: "'When someone shows you who they are, believe them - the first time.' That statement has been very useful to me. Even when I ignore it, I end up learning from it." (Rachel, right, with Melissa Vreeman from Channel 23) 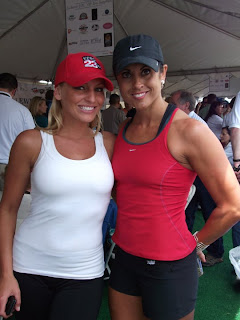 * ... CAMP BLUE JAY: Heard from Patricia Henson about the need for campers to attend the July sessions of Camp Blue Jay. This is a resident camp run for kids with mild to moderate communicative, cognitive and physical disabilities. The camp runs from July 11-24 this year with a younger group going the first week and an older group the next. The good news: so far ever registered camper has qualified for a full scholarship. "We do not want financial considerations to be a barrier to attendance," said Henson, executive director for the Society for Disabled Children. Interested? Call 661-322-5595.

* ... BAKERSFIELDISM: From correspondent Riley Parker: You know you're a Bakersfield old-timer if you remember when "The Coachlight Inn moved from Union Avenue out to 'the country' on Stockdale Highway."
Posted by Richard Beene at 2:15 PM

Love it Richard :) We all love Mz Rachel... She's a genuine and loving heartbeat of Bakersfield, as beautiful on the inside, as she is on the out. ~Anne Kelly

No doubt Ms. Legan is wonderful at what she does. She's beautiful, to boot, and has an admirable build. But how many times do you have to cover her wonderfulness? Mr. Benham had a column about her and her brother some months ago. Does no one keep track of these things? Can we have a moratorium on stories about her for, let's say, a year?

Dearest Anon or Envious...perhaps it is because like many people I just googled the woman after listening to her and her partner on the radio to see what time I could listen to her entire show.Seeing how attractive she is I shall surely be listening to this brunette beauty.Looking forward to reading the other story you referenced.As Natalie Merchant sings "hooooo..jealousy". Sal Balducci