* ... AIR POLICE: The Thanksgiving morning Pie Run,  an annual event at Hart Park that draws 300 to 400 hearty souls for a cold dawn jog through the hills, went off without a hitch. But for the first time in its long history, it was surrounded by drama. Why? It turns out someone at the Valley Air Pollution Control District read my earlier post about the pie run and became alarmed when they learned it featured a fire to warm to crowd. Next thing you know the arbiters of clean air were tracking down John Rous, the kindly retired insurance manager who has championed the Pie Run for years, and demanding that he give up on the idea of a fire. Rous appealed, arguing it was only a small warming fire that he made sure was extinguished when he left each year. But the District was not having it. Finally, Rous learned that, well, fires could be permitted but only if there was grilling involved, and only then the fire had to be commensurate in size with the amount of meat being cooked. Huh? It's okay to have a fire to grill a burger, but not to warm one's hands? Is this what we've come to? So for the first time ever, the Pie Run featured hot dogs that were grilled and later donated to the Homeless Shelter, along with all the other pies, cookies, muffins and cakes that were  left over. Meanwhile, it's comforting to know that while thousands of trucks spew pollutants into the air as they drive down Interstate 5, the local, taxpayer-supported air Nazis are scouring the newspaper looking for clues that health conscious insurgents like John Rous may be planning a warming fire. (photos below of John Rous and Pie Run participants) 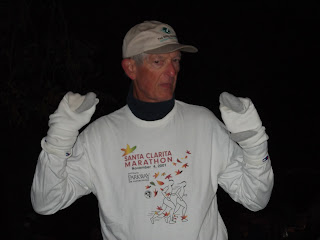 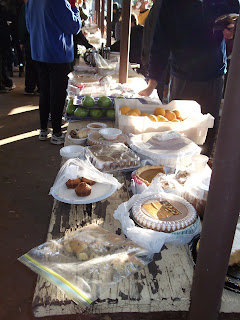 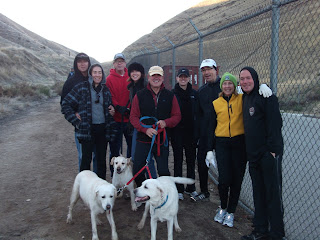 * ... COLLEGE KIDS: Nice to see so many college students home for the Thanksving holiday. They graduate from high school as slightly nervous "kids" and by the time they have a few semesters under their belts, they've got the college swagger and confidence that only maturity can bring. Among some of the kids back in town this weekend were Andrew Noriega, a freshman at the University of San Diego; Sam Brandon, a senior at the University of Colorado at Boulder; sisters Michele Keathley of Fordham University and Kim Keathley of Point Loma Nazarene in San Diego, and Dustin Glentzer, a recent graduate of Pepperdine.

* ... WENDY'S RUN: It looks like Wendy Wayne is serious about her willingness to replace Michael  Rubio on the Board of Supervisors. Rubio of course is headed to the State Senate and the governor is expected to appoint someone to fill his remaining years on the Board. Wendy, the former First Five commissioner and local civic activist, is extremely popular locally and has said she would indeed serve if tapped.  And now, a local group is out promoting her candidacy. On Tuesday, at 12:30 p.m. at Mill Creek Park, there will be a "rally" to promote Wendy for the post. Expect to see a number of local heavyweights there supporting her candidacy. Other names that have come up for consideration include Karen Goh, director of the non-profit Garden Pathways, and Pete and Nicole Parra. 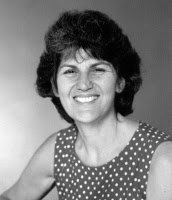 * ... OVERHEARD: A mother talking about an email from her 20-something son: "He told me he's looking for a woman who is a lady in public and a TSA screener in the bedroom."

* ... RED MOTORCYCLES: Had a nice chat the other day with Evelyn Johnson, the beloved and long-term secretary for the Rotary Club of Bakersfield, the downtown club that meets every Thursday at the Bakersfield Museum of Art. She remembers when the city police department motorcycles were red, though she can't find anyone else who remembers them. "I don't consider myself an old-timer," she told me, "though I was born in Fellows, not far from here but gone now. I do remember that Bakersfield PD had red motorcycles though I'm the only one who remembers that." Anyone else out there remember that?

* ... BAKERSFIELDISM: Thanks to regular reader Craig Holland for this one: "You know you are a Bakersfield old-timer if you remember getting your weather forecast on Channel 10 from Marge Stiles and her see-through weather map (in black and white!)"

WOW!!! Re: The Air Nazis and the Pie run. Glad ya'll came up with a solution for the "pollution". ps,love Wendy Wayne~!! She is my hero :)

daddy in a strange land said...

Ah, Craig, but you are a REAL old-timer (grand-oldtimer?) if you remember that the forecaster was Faith L. Hawkins.

Air Nazis! What's next - dream police? (Now the song is stuck in YOUR head.)