Cutting back in the face of a tough recession and saying good night to Ellie, a special horse at MARE

* ... RECESSION: Now that we're in the fifth year of this long recession it's not surprising that most of us have been forced to get our financial houses in order. A recent story in USA Today detailed just how far we have come. Consider: The national savings rate is up to 5 percent, nearly four times what it was in 2005. Homeowners are shortening the terms of their mortgages by refinancing,  they are holding onto their cars and trucks longer, and a record number of people are paying off their credit cards at the end of each month. And with the recession showing no signs of going away, we can expect more of this in the future.

* ... GOODNIGHT IRENE:  Local attorney Barry Goldner and his wife, county counsel Teri Goldner, spent a memorable evening in New York City the day hurricane Irene passed through. They were there getting daughter Rachel settled into Fordham University when Irene paid a visit, turning the normally busting city into a ghost town. With public transportation shut down, Barry said the city was eerily quiet. "The vehicle traffic was minimal and mostly cabs," he said. "The people on the streets wanted to walk and had not real destination since everything was closed. So cabs would glide by looking for fares." No doubt this will be a day that Rachel and her parents will long remember.

* ... OVERHEARD: A young boy is seen in Albertson's with his mother. He picks up a carrot and asks, "What's this?" His mother responds, "Put it down, you wouldn't like it anyway."

* ... ANNIVERSARY: Among the long-standing retail instituions in our town is Bobbi's Hallmark, the popular card and gift shop located at the corner of Gosford and Stockdale in the Southwest. I've spent countless hours poring over its extensive card list, and now I hear the shop is celebrating 25 years in business in September. It's not easy operating a business in this economic climate, so hats off to these folks at Bobbi's.

* ... RIP ELLIE: I've always admired the work the folks out at MARE (Mastering Abilities Riding Equines) do for kids with special challenges. It turns out one of MARE's longtime workers, 26-year-old Elvira the horse, passed away two weeks ago. Ellie as she was known was owned by Deborah Durkan and was a staple at the equestrian center. Said MARE'S founder Diane Hopkins, "Ellie was a MARE horse for 20 years serving our riders with love and willingness. She will be missed by all our staff, volunteers and riders who loved her very much. Miss you Ellie!" (file photo is not Ellie but another horse) 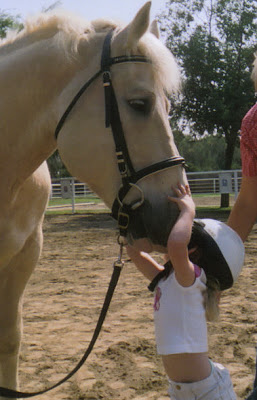 \ * ... BAKERSFIELDISM: From reader Linda Welch: You might be an Oildale old timer if you "remember the Safeway market where the Wells Fargo Bank is now on North Chester. Next door was a five and dime store featuring a pair of men's work boots that must have been 25 inches long!"
Posted by Richard Beene at 10:29 AM

You know you're from Bakersfield when you have an automatic presciption for Allergy medication set for the week prior to the Kern County Fair's openning day.
-Jolie Brouttier