Bakersfield ranks high on a list of cities with high poverty rates, but good deeds abound

* ... POVERTY: The U.S. Census says Bakersfield ranks No. 4 on the list of metropolitan areas with the highest rates of poverty in the country. Ranking first was the McAllen, Texas, area with 33.4 percent of residents living below the poverty line, followed by Fresno at 26.8 percent, El Paso at 24.3 percent and then Bakersfield at 21.2 percent. 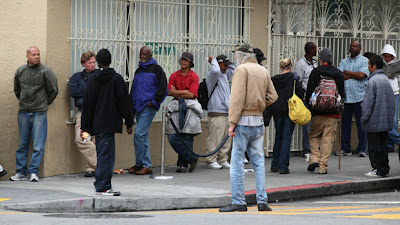 * ... FAMILY AFFAIR: You may have read about the exciting end to the Garces-Highland football game last Friday, where Highland’s last minute drive for the winning touchdown was halted by an intercepted pass by Garces to end the game. The back story is that Highland was led by their quarterback, Ryan O’Leary, who had a terrific game but threw the doomed interception to Garces’ Mark Stinson. As can only happen in small town America under Friday night lights, O’Leary’s dad is John O’Leary, owner of O’Leary’s Office Products. Young Stinson is the son of Ben Stinson, owner of Stinson’s Office Products. What are the odds? The younger lads are class acts, and their dads are friendly competitors.

* ... SALLY SHOPPER: My recent post on the old "Sally the Shopper" program at Brock's department store caught the attention of reader Warren Pechin. "My mother, Marguerite Pechin, was one of the two original Sally the Shoppers along with a woman named Rose Nathan. They worked for Marie Smith who started the program and went on to run the Golden Empire Gleaners." This was around 1967, he said, and his mother is still going strong at 92.

* ... LENDING HAND: Linda Sheffield was in front of the Target store on Rosedale Highway when she witnessed a good deed that she wanted to share. "I saw an elderly, bent lady with a cane stopped by those pesky yellow, bumpy things recently installed in front of the entrance, not sure how to navigate them. She looked as if she would surely fall. I was thinking I would go park and come back to help her, when a young man emerged from the passenger side of a small black car in front of me and offer his arm in assistance. What a blessing it was to observe kindness in action! I checked to see who was driving the car as I went by and it was another young man - not someone's mother who told him to help. I wanted to share this because I was so blessed by it, but also to help counteract all of those tacky things (and I see plenty of those, too) that show up in your column. Thanks for the interesting tidbits that you share with us."

* ... MEMORY: Reader Nancy Schilly says you have been around Bakersfield for a while if you "remember Wayne's Dairy on North Chester Avenue. It was across the street from the original Kern County Fairgrounds. Wayne's had a very good restaurant in front of the dairy. Growing up we drove in from Shafter and ate there a lot. They made their own donuts and you could watch them being made. They made them all by hand. They made all their own ice cream too. We also ate at Tiny's restaurant on the corning of 18th and Chester. You could get a chubby steak dinner for $5. Those were the times."

* ... BAKERSFIELDISM: Even young people have memories of "old" Bakersfield. From 23-year old Jolie Brouttier: You may be from Bakersfield if you "remember driving down Ming (Between Gosford and Old River) smelling only dust from the dirt field rather than Tahoe Joe's steak dinner."
Posted by Richard Beene at 10:59 AM