Keep an eye on Idaho as unions clash with the state over reforms and Cal Radio welcomes Gene Tackett on Monday at 9 a.m.

* ... UNIONS: Keep your eye on Idaho, the latest battleground where teacher unions are fighting an effort to limit their collective bargaining rights. Faced with dismal education ratings, state school superintendent Tom Luna launched a "Students First" initiative that, among other things, would restrict collective bargaining to salary and benefits. This rankles the unions, of course, who want to hold onto to archaic ideas like tenure that protects bad teachers from being fired. This is all reminiscent of the battle in Wisconsin, where the unions were dealt a setback when they unsuccessfully tried to recall Gov. Scott Walker.

* ... CAL RADIO: It's been a big week in politics - Obamacare upheld, the simmering immigration debate, the House holding Attorney General Eric Holder in contempt - and Monday I'll address those issues with my guest, political consultant Gene Tackett. We'll also talk about the upcoming "celebration of life" for Wendy Wayne, Gene's late wife who died two weeks ago. Join us at 9 a.m. on Californian Radio KERN 1180. Phone (661) 842-5376 with your questions. (file photo of Wendy Wayne and Gene Tackett)

* ... HITCHING POST: I wandered over to Luigi's Restaurant and Delicatessen for lunch Friday (spinach salad with tuna, thank you) and owner Tonya Valpredo walked me outside to see the old hitching post buried in the concrete near the front entrance. The post disappeared a few years back when the city widened the street, but thanks to Tonya's efforts they located it in a scrap heap and re-cemented it in place. I'm only aware of a few of these hitching posts left in the city. Let me know if you know of others around town. 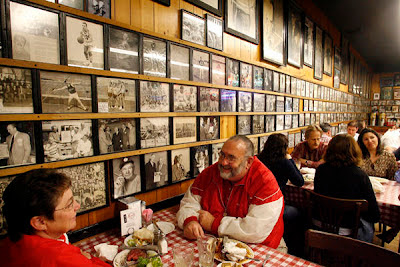 * ... THREE GENERATIONS: If you've spent any time in our community you may know the Rous clan, beginning with family patriarch John Rous, father of the Thanksgiving Day "Pie Run" at Hart Park and a longtime cyclist and runner. Last week the family spent some time in Cayucos and three generations of the Rous family found themselves riding bikes together. "Son David, my grandson Parker, who will be 13 on August 21, and myself rode the tough, steep Old Creek Road. Of course David led Parker on the ride, and I finally made it to the top. Did not stop." David is vice president of Glinn and Giordano physical therapy and is an accomplished athlete and competitive cyclist. (file photos of John, David Rous) 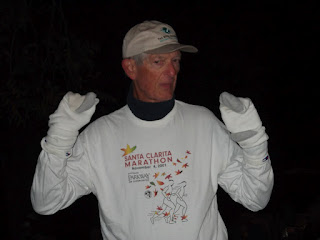 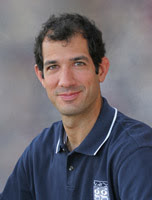 * ... OVERHEARD: Greg Gallion, CEO of Houchin Blood Bank, is heard telling a friend about being ticketed for a "California roll" in his Old Stockdale neighborhood. "It was the California Highway Patrol on Fairway Drive!"


* ... POKER: My earlier post about a couple of local card sharks headed to the World Series of Poker in Las Vegas triggered this response from reader Mike Hutson. He noted the tournament's "Main Event" begins July 7 with a grand prize in the $8 million range. "Well, at least three Bakersfield residents have qualified for the Main Event, having won local tournaments to get there. Ryan Huston and Larry Hieb each won a seat by capturing the two top spots in a recent satellite tournament at Golden West Casino.  Both were given an additional $2,000 to help with the travel expenses.  The third player is local teacher and Centennial High baseball coach, Justin Roberts.  Certainly, congratulations are in order for these three with the hope that Lady Luck sits a little closer to Ryan!"

Posted by Richard Beene at 8:27 AM