Tax hike Proposition 30 goes down to the wire in California while Gov. Brown is criticized for failing to focus his message of support for it

* ... PROP 30: It looks like Proposition 30, the tax hike sponsored by Gov. Jerry Brown and supported by the teacher's unions, is going to come down to the wire. The latest polls show support for Prop 30 in the high 40s with opposition in the lower 40 percent range. Its problem, according to Los Angeles Times political columnist George Skelton, is that Brown had not clearly defined the message behind it. For a while Brown claimed 100 percent of the money would go to schools, which simply is not true. But Skelton points out 47 percent of it - or some $2.8 billion - "legally must go to K-12 schools and community colleges." Opponents claim it will simply be used to balance the budget or will be deferred to other uses. The Wall Street Journal calls Prop 30 the second most important election next Tuesday - behind the presidential race - and says the initiative would "issue Sacramento's incorrigible spendthrifts another blank check." (photo courtesy of The Los Angeles Times) 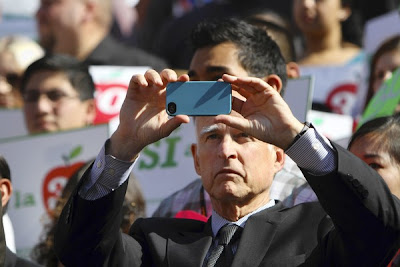 * ... CHEZ NOEL: The Assistance League is gearing up for its annual Chez Noel home tour, its biggest fund raiser of the year and always one of the season's more popular events. Tickets are $35 each and are available at the Bargain Box on Q Street, Pappagallo, Russo's Books, Sugardaddy's and Country Club Liquors on Columbus. The event helps fund Operation School Bell, which gives new clothes to some 3,000 children, and Operation Hugs, which supplies 2,500 Teddy bears to ailing children.

* ... OPEN CARRY: If you travel to Oklahoma, don't be surprised to see folks carrying pistols in full open view. As of Thursday Oklahoma became the latest state to approve that weapons can be carried in the open - loaded or unloaded - as long as the owner has a concealed carry permit. Fifteen states now allow people to carry weapons in the open. 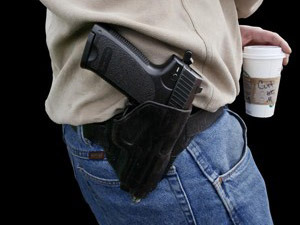 * ... KINDNESS: A shopper in the parking lot of a local Smart and Final is approached by a homeless man who wants to wash her windshield. Her response: "No thank you, I just got my car washed but here are a few dollars because you are working for your money."

* ... TRASH: We are all accustomed to seeing old mattresses and chairs discarded on the roadway, but a boat? That's right, a small boat has been unceremoniously abandoned off Manor Street just off the bike path, left there to rot. On the side of the boat someone wrote: "For rent, inquire within."

* ... HALLOWEEN: And speaking of trash, the Haggin Oaks area got its usual throng of trick or treaters but as one resident wrote me: "Do they have to leave their used diapers on the sidewalks? I found three this morning."

* ... CHICKENS: Longtime reader Linda Welch wrote to weigh on on the proposal to allow residents to keep chickens in their yards. "I live three or four blocks from a rooster .... he starts his wake-up calls every single morning about 3 a.m. or 4 a.m. He does not stop until the sky in the east starts to lighten up. That racket is as annoying as a barking dog."
Posted by Richard Beene at 3:01 PM

Doesn't the official discussion about chickens in back yards preclude roosters?

The chickens-in-the-backyard rule: No roosters.