Drama at a dinner for Valley Fever Symposium speakers when Dr. Royce Johnson performs an emergency tracheotomy on former county supervisor Pauline Larwood after she chokes on food

* ... PENSIONS: Keep your eye on the city of San Jose where a court battle is under way over reducing public pensions. The problem: San Jose now spends a fifth of its $1.1 billion general fund on pensions and retire health care. According to the New York Times, a plan drafted by the Democratic

mayor and approved by 70 percent of the voters would reduce benefits for new hires and make current retirees pay more for their health care. Not surprisingly the public employee unions have challenged this in court. Said the Times: "The outcome of the case is expected to have a major impact on municipal budgets around the state, and perhaps the country. If a state court rules later this year or early next year that the referendum allows San Jose to alter pension plans for existing workers, and it survives appeals, similar measures are expected to pop up elsewhere."

* ... LARWOOD: There was a scary scene at a special dinner for community leaders and speakers at this week's Valley Fever Symposium. Among those attending the dinner at The Mark restaurant downtown Monday night were local civic leaders Tom and Pauline Larwood. Pauline, a former county supervisor who has been involved in the fight to find a cure for valley fever, apparently choked on a piece of meat and was struggling to breathe. Luckily, she was surrounded by some of the biggest names in medicine and Dr. Royce Johnson, an infectious disease specialist at Kern Medical Center and a UCLA professor, performed an emergency tracheotomy with a pocket knife and a pen. One witness told me Pauline regained consciousness by the time paramedics arrived and is expected to fully recover. "But there is no doubt that Royce Johnson saved her life," the witness told me. The dinner was sponsored by Rep. Kevin McCarthy, R-Bakersfield, and featured the directors of the Centers for Disease Control and the National Institutes of Health. (file photo of Pauline Larwood) 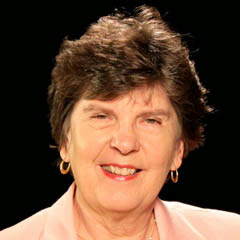 * ... BAD FORM: It looks like the kiosks on the bike trail near Chester Avenue have been vandalized. Bob Moses wrote that the kiosks, part of the Uplands of the Kern project, had holes kicked into the floors and broke signs explaining the local wildlife. "Sad part for me is that I'm surprised they lasted this long," Moses said.

* ... SPOTTED: Susan Hill spotted this on Monday: "I saw a woman holding hands with a small child, walking across Truxtun Avenue against the light. Both were wearing white 'Choose Life T-shirts. Teaching your child to cross a street in the cross walk with the walk sign glowing, might help promote the cause."

* ... MARY: It was nice to hear that Mary Trichell, owner of W.A. Thompson, was honored by the Kern County Fair Board as "Woman of the Year."  Several hundred friends attended a dinner to congratulate and acknowledge her achievements and generosity.

* ... MERLE: George Shire remembers when he was managing the Jack C. Arbuckle Co., located at 500 East 19th Street, back around 1960 when there was a place called Smoky's Tavern next door. George recalled that Merle Haggard was a regular in the place.

* ... BAKERSFIELDISM: Linda Welch wrote to ask if anyone remembers the Highway 99 bill board that the city of Fresno installed. It said: "Help keep Fresno clean. Send your trash to Bakersfield." Ouch.
Posted by Richard Beene at 4:13 PM

public employee unions are in the process of killing the goose (municipalities) that laid the golden egg (their pension and benefits packages). These advocate groups need to recognize that they advocate an unsustainable economic model which imperils us all.