Rotary Club of Bakersfield sends team to Nicaragua to in honor of the late Wendy Wayne, and more dirty diapers on our streets

* … ROTARY: Kudos to the twelve people representing the Rotary Club of Bakersfield who just returned from a week in Camoapa (central), Nicaragua, to work on a water project in honor of Wendy Wayne.  Nine Rotarians, two spouses and Cindy Chernow, Wendy's sister, worked community to build a "lavender," a wash and bathing station next to a newly installed well. This project will have a tremendous impact on the village of Las Pencas, which previously obtained water and washed its clothes in the same river – a river that would often run dry during Nicaragua's long dry season. The group included Cindy Chernow, Sue Benham, Bob and Patti Burdette, Jim Cordle, Jeff Green, Jeff Johnson, Justin Leland, Dave Plivelich, Steve and DeAnne Sanders and Ray W. Watson.  This is just one more example of the impact the Rotary Club of Bakersfield has in our community and abroad.

* … ONCE A DRILLER: Tom Schroeter sent me a gentle reminder about being a Driller. Said Schroeter: "As the proud father of Ali Schroeter, I want to thank the paper for the article in Thursday's edition recognizing her for breaking a school volleyball record at Rutgers University (Former Driller Sets Record).  However, I would be remiss (and would suffer the slings of all Drillers) if I didn't point out one error in the article. There are no 'former' Drillers. As you have no doubt heard, 'once a Driller, always. . . .'   And so next time there is an article about a 'former' Driller, you might consider something like '2012 Driller Sets Record.'" I stand corrected!

* … DIAPERS: Can you stand one more story about people tossing dirty diapers on our streets? This from Carole Casteen: "Bakersfield is a great place to live, but some of our residents need basic instruction on civil behavior.  One Saturday morning I went to the Costco on Panama Lane, and arrived early enough to get a parking spot extremely close to the front door.  As I was loading my groceries into my vehicle, I noticed a white bundle smack in the middle of the parking space right next to my car.  I watched as a huge truck roared through the parking lot and chose to drive into the parking space next to my car. Yes, he drove his big truck right over the white diaper bundle, squishing it completely and then drove off.  Fortunately none of the stuff that squirted out of the rolled-up diaper sprayed onto my car, and fortunately I was far enough away and had already loaded my groceries. Note: the rolled-up diaper next to my car could not have been more than 25 steps to a large trash can near the Costco entrance. The Costco manager said that it happens there ALL THE TIME!"

* … MORE TRASH: And there is this from reader Denney Evans: "I read that a special task force is being assembled to  monitor vehicles heading toward our city dumps. A suggestion. Use this group to monitor high schools. We could balance the budget on the citations. My findings in  Riverlakes confirm that the student favorites are  Bud Light, Camels, McDonalds and Starbucks."

* … COFFEE SHOP: For all your old timers out there, who remembers Cy's Coffee Shop? This from reader Donna Semar: "You might know a resource where I could find more information about Cy's Coffee Shop that was located on the northwest corner of 18th and Eye Streets.  I'm very interested in images from the interior. My husband referred to it as Robin Hood's and doesn't know why. Perhaps there was a mural of Sherwood Forrest on the walls?  He would visit Cy's with his father in the early 1960s. I do know that there were 3 Cy's - 18th and Eye, 18th and Union (then it was 99), and 24th Street (currently 24th Street Cafe). Any information will certainly enhance our Thanksgiving conversations." 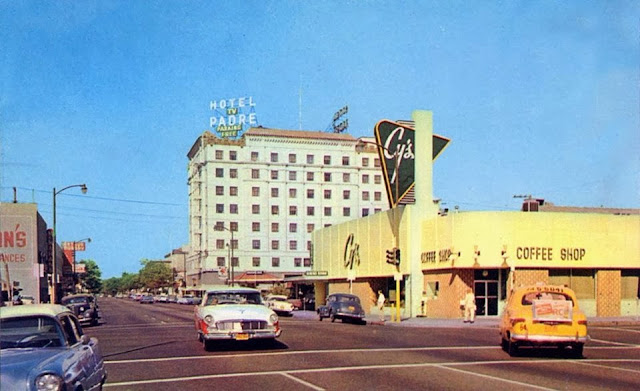