Has Gosford road become our version of the German autobahn? And who posts pictures of themselves smoking pot, posing with guns and flashing gang signs? Youthful indiscretion or just plain stupid?


* … GOSFORD: The recent accident on Gosford Road that took a Rohnert Park man's life was beyond senseless, especially if it's true that a 22-year-old man was speeding and he caused it to happen. Betsy Gosling was in the Town and Country Shopping Center at the time.. "I saw

the most horrendous collision I have ever seen. I heard the fire truck siren coming, several women standing on the northbound sidewalk, one appeared to be very emotionally upset. There were two cars in the northbound lanes, completely destroyed, one upside down… As I  attempted to maneuver through the debris across the southbound lanes, I prayed for God to  have  mercy. My prayers are for all those  families involved, especially the family of the man who was killed," she said. "What is it going to take to stop this reckless driving? My daughter describes Gosford, going south, as the 'autobaun' Bakersfield Police at that intersection issuing tickets might help. Possibly  the victims would consider donating those cars to the CHP and place them on the high school grounds for the kids to see what happens when you speed on city streets and run red lights... SLOW DOWN and live." Witnesses said the Civic was speeding, but the investigation is continuing and police have yet to bring charges. (Bakersfield Californian photo) 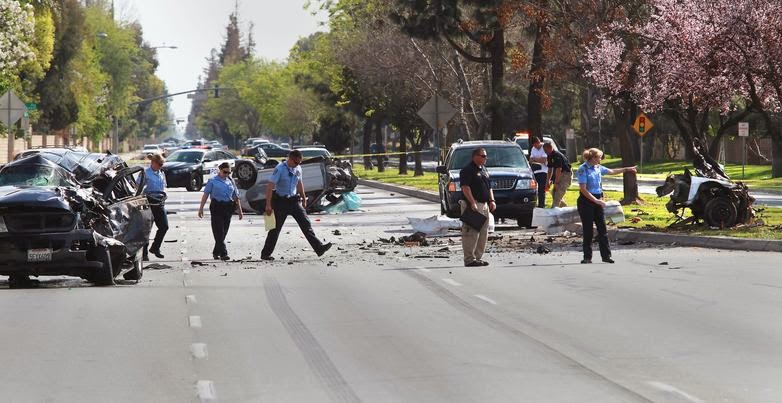 * … WRECK: When horrific accidents like this happen, people will often search social media sites like Facebook to learn more about the people involved. And sure enough, it wasn't long before people were sharing links to a Facebook page of a young man with the same name as the driver of the white Honda Civic. Who knows if it is the same person, but this is a lesson in what many people think is appropriate to post for all the world to see. This particular Facebook page owner posted pictures of himself flashing gang signs, posing with weapons, presumably smoking pot, and with cash and drug paraphernalia strewn about a countertop. Whoever owns this account - and I stress there is no certainty it is the same person involved in the accident - should grow up and take these photos down. Youthful indiscretion aside, it's simply bad form.

* … JURY DUTY: Steve Robinson was sitting in jury duty recently and had plenty of time to think about the process of what he called an inefficient system. "All of us dread the inevitable summons, but the most agonizing component of jury duty is not the task itself, but having to waste a day observing a part of our civic duty that can be streamlined.  Reporting time is 7:30 a.m. but the earliest you get called to action is 9 a.m. You then sit in a room for two more hours before you enjoy a two hour lunch. After lunch, you sit for two more hours and are then sent home at 4 p.m.  If you get called to a courtroom, you then sit for the better part of an hour listening to juror instructions. Wouldn't it be a better use of time to use the 7:30 a.m. to 9 a.m. time period to read jury instructions to an already captive audience in the juror room so the judge could just call the prospective jurors into his chambers and get down to business?  On the other hand, is it too much to ask for courtrooms to organize themselves in a way so they are prepared to call prospective jurors first thing in the morning rather than make hundreds of people wait an entire day to see if they are called to duty?

* … TUNNELS:  Yet another reader remembers the tunnels that snake under downtown Bakersfield. Said Ronal Reynier: "I remember seeing the entrance to one when years ago they tore down the old 'REX' theater. What I most remember is the painted billboard that was exposed on the wall next to it.
I do not recall the name of the establishment. but it advertised a 'Free lunch, with a 5 cent (10 cent?) beer.' I have no idea when it was painted, but have wondered about it for years. I believe that
the Bakersfield Californian took photos of it at the time. I have wondered what type of lunch you received with that beer. It had a drawing of a sandwich on a plate with pickles, I believe. It was faded but quite a work of art. Was it done for free beer?"
Posted by Richard Beene at 1:57 PM