For the first time ever the University of California system admits more Hispanics than whites, but Asian students continue to lead the field particularly at UC Berkeley and UCLA


* … COLLEGES: This is the time of year when high school seniors commit to the college of their choice, a white knuckle period for both the students and their parents. And now comes word that for

the first time ever, more Hispanic students were admitted to the University of California system than whites, reflecting our changing demographics. Add to that: the system admitted more out of state students than ever as well, simply because they pay higher tuition fees than in-state students. The facts: Latinos account for almost 29 percent of the California students for this fall's freshman class. That is slightly more than the 26.8 percent of whites, but it trails the number of Asian students at 36.2 percent. Black students represented 4.2 percent of those admitted. 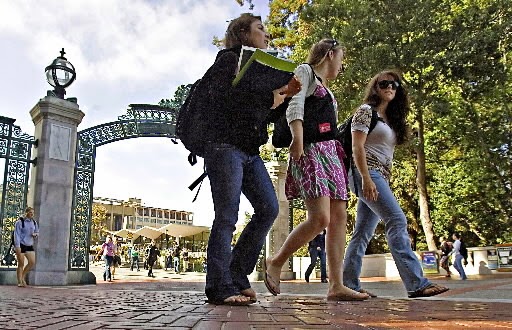 * … BUSHES: From Jon Crawford comes this thought: "Hawthorn bushes are evergreen, and although they are rather innocuous in looks, they do provide greenery in center dividers on Truxtun. In the spring they are covered with small pink flowers that last less than a month. Last month I noticed the city’s gardeners pruning to remove the flowers while they were in full bloom. One might conclude our city’s bureaucracy likes neat, but not beauty or color."

* … VINCENT: My earlier post about an abandoned cat that showed up on my porch brought this uplifting tale from Superior Court Judge David Lampe: "My wife Sandy (and I) are suckers for animals. A big feral black tomcat showed up on our front lawn about a year ago. We already had three rescued cats (and three dogs). My wife's heart went out to this big tom who was ill and dying on our front lawn. He was torn up on his head and torso after a lot of fights. He must have lost the last one. He wouldn't leave. Long story short: after many vet bills (neutered, antibiotics, eye drops, infected teeth removed) and convalescence in a cage in a spare bedroom, he survived. We call him Vincent, because they cut his ear when they neutered him (because he was feral) and because his other ear was chewed up in fights (my wife is a professional artist). We thought that we would release him once neutered and probably feed him as an outdoor cat. However, he now will not set foot outside. If we open the door, he just stares at us as if to say, 'Hey, I've been there - done that. Never again!' He has become the sweetest cat we have, and gets along with all the other animals. My nickname for him is The Thug because of his size and history. He is like a mob guy enjoying retirement. Sort of like Marlon Brando in the Godfather."

* … MEMORIES: The old bank building being restored at the corner of 18th and Chester has triggered a lot of memories. Albert Lyons remembers going there when it was Tiny's restaurant. "I remember sitting by the big windows overlooking 18th Street. After that it was a  medieval theme restaurant but I cannot remember the name... King Arthurs? does anyone remember that? I had a friend who worked there."

* … MORE MEMORIES: And this from reader Henry Webb: "I am grateful and excited to see the old bank building at 18th and Chester be resurrected. It should be a glorious place to see when finished.
I remember in the 1950s there was a Tiny's restaurant at that location. My dad used to take me there for their famous strawberry waffles. Across the street was a Sambo's cafe with a large mural of Sambo and the tiger in a jungle setting. Such a place is shocking to think of today as are the miscegenation laws that were in effect in some states then. I miss Tiny's."