The debate over marijuana moves to the medical arena, where a prominent farmer and businessman claims it helped him survive cancer

* ... CANNABIS: As recent as last February Arvin businessman John Trino believed marijuana was a dangerous 'gateway drug' that should be banned. But that was before the 76-year-old former farmer

was diagnosed with an insidious form of cancer, and before his doctors at Cedars Sinai recommended medical marijuana to help him survive the radiation and chemotherapy treatments. His view now? "It saved my life," he told me on KERN NewsTalk 96.1 FM. He is now denouncing the Kern County Board of Supervisors for voting to ban the sale of cannabis, calling it a cynical, short sighted political move that puts lives at risk. "They haven't heard the last of me," he said. "I believe I survived to fight this fight." And the best news for Trino: a few minutes before appearing on the radio he learned from his doctor that he was cancer free. 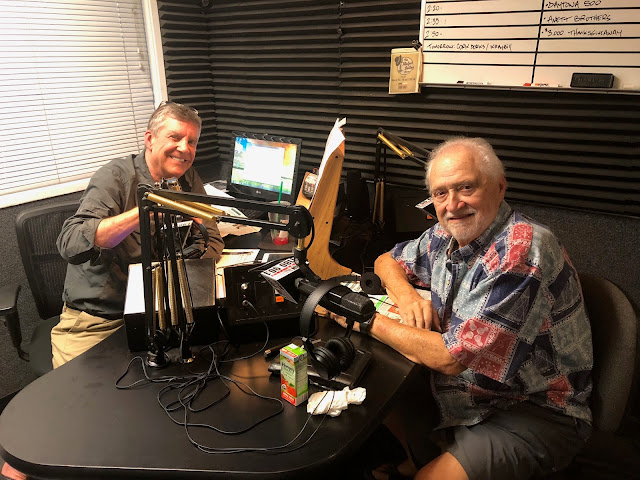 * ... DANGEROUS CITIES: Here is a list I am happy that Bakersfield did not make. According to the website FinancialHub, the most dangerous cities in California (starting with the most dangerous) are Emeryville, Oakland, Red Bluff, San Bernardino, Grass Valley, Big Bear Lake, Modesto, San Francisco, Santa Cruz and Commerce.

* ... GOOD ADVICE: From comedian Peter King: "I think the golden rule for a man should be: don't say anything to a woman that you wouldn't want a man saying to you in prison."

* ... GOOD FORM: Constance Corbell wrote to thank a stranger: "The six mature expatriate British ladies who lunched at the Wool Growers Restaurant Tuesday, October 24,  would like to thank the gentleman who anonymously covered their bill. His kindness is truly appreciated."

* ... SHOUTOUT: Lynn Finch wrote to send a shoutout to the Ovation Theater. "On Sunday my friends and I attended a wonderful local performance of 'Gypsy' at the Ovation Theater, across from The Mark Restaurant downtown. This historic theater (formerly the Spotlight Theater) has been beautifully restored and the performance was stellar. Such talented local performers with beautiful singing, great costumes and acting. I hope many people will take time to discover this little jewel in our community. Gypsy continues for three more performances, Oct. 27th, 28th, and 29th."

* ... VENTING: Reader Ronal Reynier sent this rant: "I have a pet peeve. Well a combination of pet peeves. I starts with parents who say if high school teachers were doing their jobs they would not
have to give out homework. This is combined with; high school teachers are paid too much for all the days they have off. Having two and soon three high school teachers in the family; their opinion is laughable. High school teachers spend at least 20 hours or more a week at home grading their kids
homework. If you add this the to the hours they spend in the classroom they are well under paid. These complaining parents would and could not do their jobs."

* ... MAILBAG: And this note from Arthur Helming showed up in my mailbag: "I live on Panorama and we use the bluff area for exercise almost daily and pick up trash left by individuals that use the drive throughs at the various restaurants on Columbus Avenue. The individuals that leave the trash are not the ones who exercise, they are the people that eat their burgers and fries after dark and are too lazy to use the receptacles for trash. When we exercise at 5 a.m. the trash is already scattered around the base of the benches and blown around by the wind. If you walk or run on the north side of the street where the visitors park you will also find condoms in the gutter on occasion along with trash. The park is supposed to be closed from 10 p.m. to 5 a.m."

Posted by Richard Beene at 9:49 AM