Kevin McCarthy: Forget California's ill conceived and costly hi-speed rail, we should instead focus on highways and water infrastructure

Every week I turn over space on his blog to House Minority Leader Rep. Kevin McCarthy to bring us up to date on  current events. Here is his report for this week:

"California’s high-speed rail project has turned into a complete nightmare for Californians. Early reports suggested that this project would cost about $45 billion, but that number has ballooned to 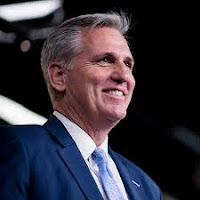 $77 billion, with some estimating it could cost closer to $100 billion. Even California Governor Newsom recently stated that 'the current project, as planned, would cost too much and take too long.' This sentiment echoes what many Californians have felt for a long time – this project just isn’t feasible.

"The California High-Speed Rail Authority (CHSRA) hasn’t been fully transparent with Californians, and their actions over the past years have led me to lose confidence in their ability to finish this project. In fact, they’ve intentionally misled us by inflating ridership numbers while simultaneously failing to provide tangible deliverables – like satisfactory financial reports – to the Department of Transportation (DOT). I applaud the DOT’s recent decision to rescind nearly $929 million in unspent federal funds that were allocated for this failed high-speed rail project because it’s clear that CHSRA cannot be entrusted with anymore taxpayer dollars. It’s more important than ever that we protect taxpayers, and given Governor Newsom’s recent statements, the DOT’s move makes a lot of sense.

"Living in California, we’re fortunate to be surrounded by diversity, both in our ranging landscapes and in the people who call California home. But our geography and growing population have caused stress to our infrastructure and transportation system. That is why I will fight to refocus our efforts on other more-needed California infrastructure projects, like highways and water infrastructure, because California’s communities and families deserve it.