Judi and Rob McCarthy's generous gift to the Kern Community Foundation, Linda Jay retires from the Bakersfield Association of Realtors and we get our first snow of the season

* ... MCCARTHY GIFT: One of life's true joys is being able to give something back to the community when you can, and few do it better than Judi and Rob McCarthy. The McCarthys formerly owned and ran Litespeed Systems, Bakersfield's premier high-tech firm before moving it to Austin several years ago and selling it. Now they have dug into their pockets to give generously to one of Judi's favorites local non-profits, the Women's and Girls' fund and the Kern Community

Foundation. In all, the McCarthys gave the Foundation some $2.5 million, including a $400,000 matching grant to the Women's and Girls Fund. Said Judi: "When I served on Kern Community Foundation’s board, my eyes were opened to the ways a community foundation can benefit its community: specific initiatives like the Women’s and Girls’ Fund or Kern Futures (student scholarships) or strengthening nonprofits; and encouraging citizens to keep their philanthropy local. I knew back then that, if we ever had the means to give back to the place where we’d raised our family and built our business, we’d do it through the Foundation. We reside in Austin, and this is now home, but our hearts still live in Bakersfield." For some of us, $100 may seem like a big donation, but size does not matter, intent does. Give when you can. 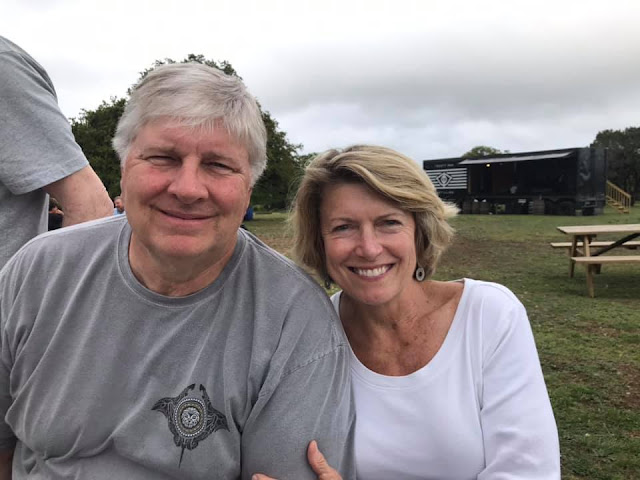 * ... FIRST SNOW: It took a while but we finally got some much needed rain - and snow - in the higher elevations. The storm that passed through dusted Frasier Park with a blanket of snow while given the lower elevations a good soaking. Bakersfield received .37 of an inch, a good way to start the rainy season. 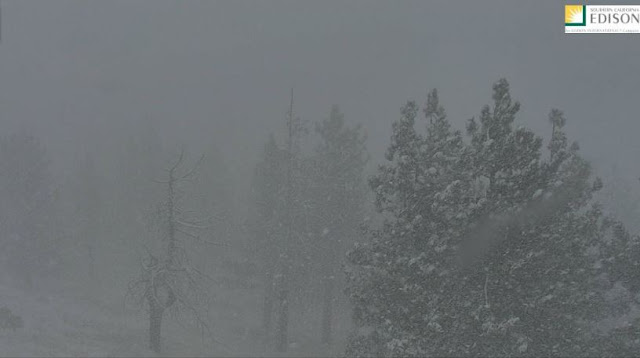 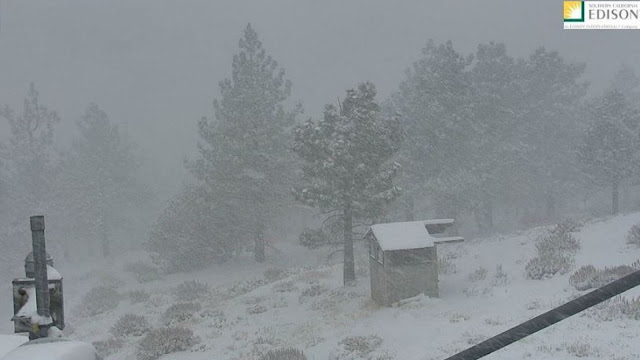 * ... IN-N-OUT BURGER: You might have heard about gays and lesbians boycotting Chick-fil-A because of its corporate contributions to family value groups, but how much did you know about In-n-Out Burger and its commitment to traditional values? Instead of backing down as Chick-fil-A did, the popular California burger chain has doubled down by printing more biblical verses on its packaging. This from a Christian website: "In-N-Out Burger owner and president Lynsi Snyder, 37, says in a new interview with The Christian Post that she has expanded a tradition started decades ago when then-company president Rich Snyder printed Bible references on packaging. 'It was my Uncle Rich who put the Bible verses on the cups and wrappers in the early ‘90s, just before he passed away,” Snyder said. 'He had just accepted the Lord and wanted to put that little touch of his faith on our brand. It’s a family business and will always be, and that’s a family touch. In later years, I added verses to the fry boat, coffee, and hot cocoa cups.” The verses are discreet – on the bottom of a cup, for example – but easy to find with a quick search. The company has used well-known Bible references like John 3:16 (“For God so loved the world …”) but also less-popular ones like Nahum 1:7 (“the Lord is good, a refuge in times of trouble. He cares for those who trust in him.”). 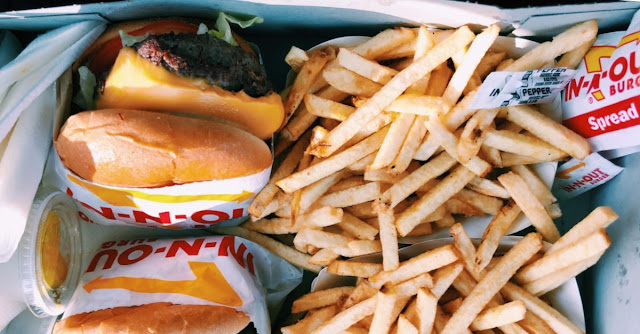 * ... WELL DONE: Congratulations to Linda Jay who retired as head of the Bakersfield Association of Realtors. Jay, wife of Bruce Jay of Valley Republic Bank, has worked for the BAR or years, seeing the organization through the digs and valleys of the local housing market. 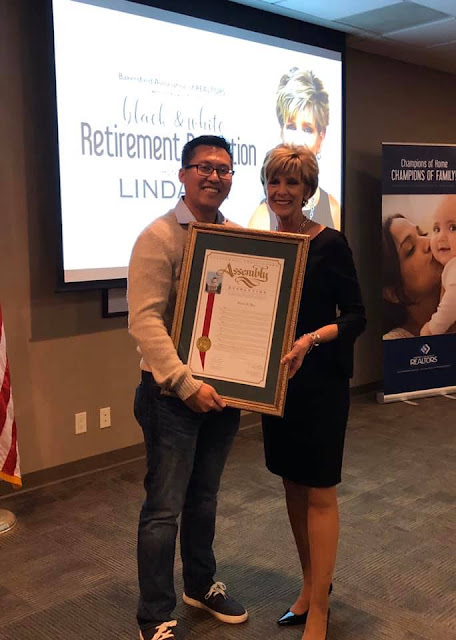 * ... THANKSGVING: So what is your favorite Thanksgiving pie? Pumpkin? Chocolate? Pecan? Check out this map and see where you are. 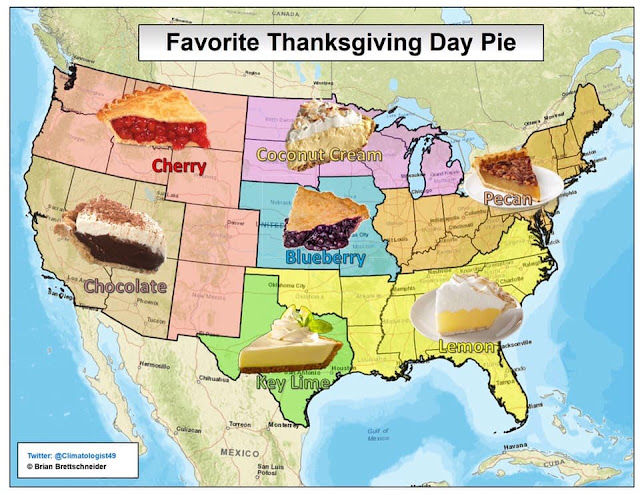 * ... MEMORIES: Here we have an old picture dating to 1910 of the Arlington Hotel Building
at the southeast corner of 19th and Chester. 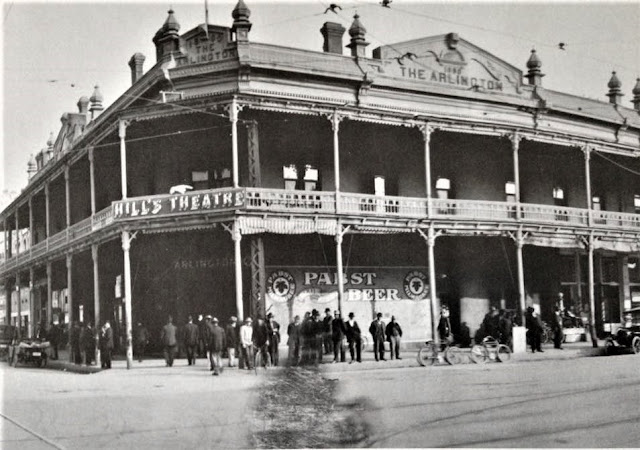 * ... MORE MEMORIES: And as long as we are looking at pictures of old 19th Street, check out this one of the Hughes Druggist location in 1915 at the southwest corner of Chester Avenue and 19th Street that would become the permanent home for Vests Drugs Store in the early 1940s. 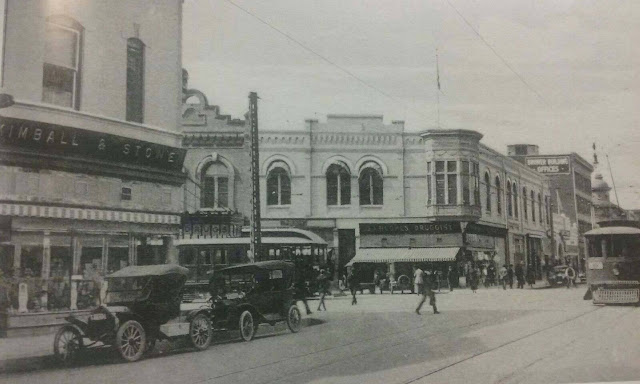 Posted by Richard Beene at 9:03 PM