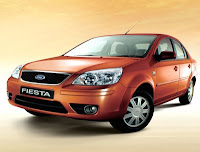 Let's be certain about one thing: no matter what you think about American car companies, there will be hell to pay if they go under. Which is why I am always encouraged to see them taking innovative steps to stay alive. We've mentioned Ford's new Fusion which boasts gas mileage in the 40-plus range. Now Kyle Northway over at Jim Burke Ford tells me about the new push behind the Fiesta, a subcompact that has enjoyed huge success in Europe for many years. It will be sold in the US in 2010, and to stir some excitement Ford has unveiled its "Fiesta Movement." Ford is looking for about 100 of what Kyle calls "young, tech savvy, socially active consumers" to take the Fiestas on "extended test drives" and then blog about them, or at least spread they word via social networking. (If intertested apply on the FiestaMovement website). I like where this is going: Ford sees the movement toward smaller, more fuel efficient vehicles, and they're showing a good touch using social networking to get the word out. Once Ford lines up some Fiesta drivers here, I'll report back.
Posted by Richard Beene at 11:52 AM