Other than the declining popularity of President Obama, there's not a lot of celebrate these days if you are a die-hard Republican. The party leadership is in disarray, Sarah Palin is back on the loose and no one can seem to agree on a cohesive opposition party strategy. So it was nice to see The Economist recognize Bakersfield's Kevin McCarthy as one of three House conservatives who are leading the push to help reform the party and give it one cohesive voice. Though a product of Great Britain, The Economist wield enormous influence and is known for its smart and thoughtful commentary. Getting a mere mention in the magazine can make careers, so it was nice to see McCarthy get some ink. Read the full story here but here's an excerpt:

"So conservatives seeking saviours are increasingly alighting upon the House of Representatives, and especially the youthful duo of Eric Cantor, the Republican whip, and Paul Ryan (pictured below), the party’s senior member on the budget committee. Both represent swing states: Mr Cantor, 46, is from Virginia, Mr Ryan, 39, from Wisconsin. Both leapfrogged older stalwarts to get their current posts (Mr Cantor is the most senior House Republican after the minority leader, John Boehner, who is 59). Along with Kevin McCarthy, a representative from California, they run the Young Guns, a team of House Republicans devoted to helping favoured candidates get elected." 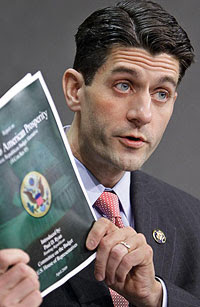 The story continued: "But whatever the division of labour, it is not hard to see the two men’s usefulness to their party. Their determination to produce alternatives rather than mere opposition to Democratic policies should help to prevent the Republicans from being typecast as the party of “no”. And they are generally more mindful of the tone they strike than older, grouchier Republicans. Mr Ryan’s political hero is the late Jack Kemp, the soul of sunny conservatism.
Posted by Richard Beene at 2:33 PM

These liabilities are a direct consequence of Mayor Lou Barletta’s “leadership.”

With his city on the verge of financial ruin, Mr. Barletta wants to abandon the city of Hazleton and go to Congress so that he can bring his destructive, incompetent leadership to the national level. Mayor Lou Barletta made incredibly poor decisions as Mayor, so Kevin McCarthy wants to help him become a Member of Congress so they can make bad decisions together.

Although the obvious may not need to be said, I will say it, “Why is our representative in Congress working for Lou Barletta’s bid for a Congressional seat?”

In the midst of the worst economic collapses since the Great Depression, Kevin McCarthy and Lou Barletta know how to make things even worse for the people of our country.

This is another story of people with poor judgment blindly working together without the ability to recognize the folly of their judgment and without due care for the consequences to those left behind while they move up the political ladder. (The parallels to a distinguished war hero Senator and the mayor of Wasilla, Alaska, are ironically remarkable.)