FDIC warns of new wave of bank failures and new cracks in the housing recovery: hold that champagne for later!

Before we get too giddy about signs the economy has turned the corner, it's wise to remember that there are plenty of lagging indicators pointing to a long, slow slog back to anything regarding normalcy.
First, I was struck reading two different takes on the ongoing crisis in the financial industry. The first (read the entire post here) said that according to the FDIC, fully 5 percent of all banks in the country are now considered "troubled." Yet another (read the story here) said there had been a 36 percent rise in the number of banks put on the FDIC's "watch list." The reason?

"Many of the new failures (or potential failures on the trouble list) are seeing weakness due to traditional personal and commercial loans going bad. While the headlines may not be a blaring as we saw in late 2008, the underlying reason is much more worrisome. Essentially the slow economy, low employment, reduced consumer spending, and generally poor business environment has caused many business loans to simply be unserviceable. So on bank balance sheets as they write off these loans as uncollectible, it means that their assets (receivables from borrowers) fall well below their liabilities (balances owed to depositors) which creates insolvency. The pace of more traditional banks going under (there have been 81 so far this year) points to sustained economic weakness which could quickly choke off the current “green shoot” economy." 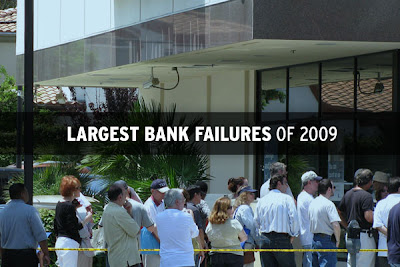 Finally, local appraiser Gary Crabtree alerted me to a posting on the Appraisal Institute website which says we need to be careful about getting too giddy about recent indications that home sales have picked up. (read the post here) The institute says the numbers of homes on the market may be skewed because some folks are simply taking unsold homes off the market and converting them into rentals, which in itself could cause problems down the road. From the post:

"However, although prices may be nearing the bottom in many markets, there are reasons for consumers to remain cautious. It is not surprising that some markets saw increases in sales with two temporary short-term fixes hitting the market: an $8,000 refundable tax credit for first-time buyers as well as lower mortgage rates. In addition, the inventory of housing may not appear what it seems with many unsold homes taken off the real estate market and simply put up for rent, especially in hard-hit markets such as Miami. Moreover, because it can take several months for delinquencies to turn into foreclosures, there may be a new wave of distressed properties entering the market soon as last winter’s casualties begin to surface."


All in all we have room for optimism, but keep it guarded. There are lots of factors that could throw this recovery off point.
Posted by Richard Beene at 8:40 AM