Bako Bits: the sad saga of Crisp and Cole and a weekend full of art and music to look forward to

Lots to catch up on and plenty to look forward to this weekend. Let's start ...

* ... THE CRISP AND COLE SAGA CONTINUES: Is there a more compelling local story than the latest twist in the Crisp and Cole saga? This story has it all: greed, hubris, gullibility, and loss amid the now historic real estate run-up and bubble. Which is why I found the latest installment on ex staffer Jerald Teixeira pleading guilty to federal fraud charges so compelling. Let's face it the two principals here, the flamboyant high flying David Crisp and his older partner Carl Cole, earn little sympathy from anyone other than perhaps their mothers. And it was almost sad to hear Cole quoted in The Californian as saying "I'm an old man and I was taken in." Really? He was in his late 50s at the time and last I heard he should still have a pretty good kick at that age. By contrast I found Teixeira's plea and his willingness to own up to his mistakes refreshing. He told The Californian he was looking forward to "manning up" to what he did and "doing what's right." Don't you wish everyone involved in this saga would do the same? Apparently Teixeira, a McFarland High graduate, is a Marine Corps veteran. That probably explains a lot about his willingness to "man up" to his transgressions. Lastly, if you are not familiar with the story, read The Californian's excellent coverage here. This is the kind of stuff only a local newspaper can or is willing to do, but that's a topic for another time.

* ... ANOTHER FIRST FRIDAY: If it's October it must be time for another "First Friday," the monthly date when downtown comes alive with art, music and food. There's always plenty to do, whether it's starting the evening at Uricchios Trattoria or Mama Roombas for food with a little Cuban/Caribbean flare, and it's always worth the visit. Over at Metro Galleries at 1604 19th Street, owner Don Martin has been busy promoting a show of photographs by local artist and educator Susan Reep and Californian photographer Michael Fagans. I haven't had a preview but Don always puts on a great show and of course there's always some finger food and wine available. In his words:

"Susan has created a stunning group of photographs that have been altered to create amazing and sometimes whimsical scenes. Michael's collection of photographs document his time embedded with US Forces in Afghanistan and capture the intensity of the moment. Live music on the patio, Hors d'ouerves and no host wine bar by Valentien."

* ...  MEANWHILE OVER AT THE FOX: If a movie is more your style (and by that I mean a movie that otherwise never see the light of day in Bako) then check out the Friday night Flics (Film Lovers International Cinema Society) over at the historic Fox Theater. Flics is a largely undiscovered gem in our town but its following is growing with each showing. This week: "Laila's Birthday," which the Flics Facebook site describes as "a Palestinian movie that manages to be absurd, funny and thought-provoking at the same time." It continues:

"Human Rights Watch describes the film as 'A moving and humorous tale of a Palestinian taxi driver just trying to get home in time for his daughter's birthday.' Variety wrote the film shows 'the confusion, frustration, absurdity and coping mechanisms of life in contemporary Ramallah.'
If you haven't been yet, check it out.

* ... REMEMBER CLAUDIA TRUE? If you are connected with the  local art scene, or recognize some of the paintings below, you will remember Claudia as a talented member of our Bakersfield art circles. Her work is distinctive and unique. and - my opinion here - always has a positive energy surrounding it. I saw on Facebook that Claudia is celebrating ten years as an artist and is selling and showing some of her work online. Claudia and her husband moved to Overland Park, Kansas, (a suburb of Kansas City) in February 2007 and it has been our loss, but it's good to see her staying in touch. She has a wonderful story to tell, so check out her website.

Other examples of her work: 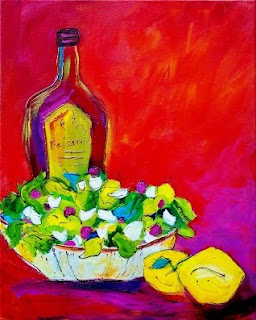 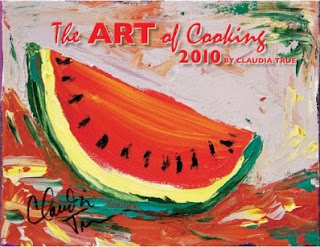 Cole: I'm an old man. I must be an old woman then as we're the same age. Funny how my mind still seems to work and I'm productive and I have a show opening Friday. That is such a disingenuous comment as to be insulting to everyone, not just us over 60s. It shredded any iota of sympathy I might have had for him (even though I don't think I had any). If I can turn it into something art related, I'll have to blog about it. I may have to anyway. susanreep.com/blog.

Susan's great work is also on display at the Younger Gallery in the BofA building on Truxtun...Food Glorious Food is the exhibit title and there is lots of "yummy" artwork on display and for sale.

Right on, Susan--I couldn't have said it any better! I'm looking forward to your show!