Bako Bits: circling the wagons at Tejon Ranch, celebrating a healthy Wendy Wayne and the return of Steve Uricchio

Some tidbits around our community ...

* ... HAPPINESS AND HEATH: Wanted to catch up with Wendy Wayne after receiving some inquiries about her health. It's a testament to Wendy's personal popularity that so many folks are concerned and have rooted her on in her battle against non Hodgkins lymphoma. I haven't seen the former First Five Commission chairman and civic activist in a while but I hear she is out and about, looking great and busy visiting with family and doting on her two granddaughters from sons Benji and Larkin. This photo from her Facebook page speaks for itself and reflects the joy in her life. I asked her for an update, so here it is:

"I can tell you that I continue to be very grateful for the phenomenal support I have from this community: family, friends and folks I don't even know. Prayers and thoughts have been so very abundant. Amazingly, I still continue to receive reports of Random Acts of Kindness from folks who are responding to my request from a year ago to do something for someone else in lieu of cards, flowers, phone calls to me. It's just so overwhelming.
"My tests taken last week were good. My white blood count continues to be low, however, there is no evidence of lymphoma or myelodysplasia.  I feel really good and look forward to the day when my energy level returns to pre-Non Hodgkin's Lymphoma days.  In the meantime, I love every moment I'm alive - and feel like each day of good health is a gift." 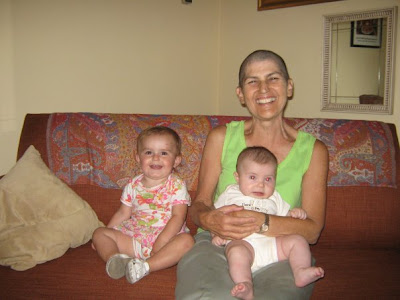 * ... WHO'S LAUGHING NOW?: How'd you like to be the folks up at Tejon Ranch when the news broke that a tribe of Native Americans is claiming ownership of part of the ranch? That's right, the challenge comes from David Laughing Horse Robinson, an instructional technician over at Cal State Bakersfield, who claims the Kawaiisu tribe owns part of the land on the east side of Interstate 5. Huh? Never mind that Tejon's ownership has never before been challenged or that the Ranch  is due to go before the Board of Supervisors on Monday for approval of Tejon Mountain Village, the high end development of mountain homes. And, it came on the same day that Tejon won the governor's Environmental and Economic Leadership Award in recognition of the historic conservation pact signed by Tejon Ranch and conservation and environmental organizations. Under that pact, 90 percent of the ranch - some 240,000 acres - will be preserved. But here's the kicker: now comes word (reported in Friday's  Californian) that the tribe is disavowing itself from Laughing Horse Robinson, who seems to have his own agenda. And check this out: this guy ran for governor in 2004, apparently one of those guys who throws his hat in the ring simply to see his name on the ballot and get a little attention. Who's laughing now?

* ... PADRE TO OPEN FOR NEW YEAR'S? Was downtown the other day and spotted Steve Uricchio,  the itinerant restaurateur who has jumped around the past few years. Back in the day Steve and his sister Claire partnered with their father Nick to open Uricchio's Trattoria, the popular Italian eatery over off 17th Street in the Haberfelde Building. Steve later left, ran the Petroleum Club kitchen and event dining for a while, dabbled in music and moved around a bit. He's now back and says he's the new food and beverage director at the historic Padre Hotel. Steve says the hotel is planning a grand opening gala at the restaurant at the end of the year, possibly culminating with a New Year's Eve dinner and party.

these tribal claims bring to mind how Palestinians lay claims to Israel...leave it to a downtrodden group to wait until someone else makes a previously overlooked/underdeveloped asset "bloom in the desert"....then, they all want a piece of it, insisting that it's been theirs all along! If so, why are we only hearing about it now?