Bako bits: Mourning the loss of a local bank and Laura Wolfe finds a new gig

* ... LAMENTING THE LOSS OF SAN JOAQUIN: The closing of San Joaquin Bank is a loss for our community on many levels. First, it has been one of the stalwart business banks that has helped this community grow, and it has done so while choosing to support the non-profits in a way the "too big to fail" banks would never deign. It was San Joaquin, after all, that provided the loan (at below market rates) that allowed the Bakersfield Museum of Art to expand, and that's just one example. In addition to all the good people who are now out of work, one has to wonder about the aggressive tactics of the state Department of Financial Institutions and the FDIC in closing the place down. The bank argues that it had met and exceeded the DFI demand to raise $27 million in capital, so why would the state agency pull the plug anyway? What possible good can come from closing a community bank in this economy? And there are some interesting questions being raised about when Citizens Business Bank was told it had the green light to take over San Joaquin. For example, new custom Citizens signage was installed at the old San Joaquin Coffee Road branch  less  than 24 hours after the bail failed. Was the signage ordered while the San Joaquin board was busy raising capital and meeting the Fed demands? Had the FDIC and DFI already made up their minds by the time the San Joaquin board met the capital demands by the Friday afternoon deadline? When the real story of San Joaquin and the bank closings is told, let's hope it doesn't smack of a new era of McCarthyism.


* ... WOLFE TO ARTS COUNCIL: Was happy to hear that Laura Wolfe, who lost her job in a shakeup at  CSUB's development office, has landed a new gig as part-time development officer for the Arts Council of Kern. Laura is a longtime Shafter resident who was a fixture at Cal State until new university development director Beverly Byl let her go, citing budget cutbacks. If Laura brings the energy to the Arts Council that she showed at CSUB, the arts will most certainly benefit. Laura reminded  me that ARTini, the Arts Council's martini tasting fund raiser, is set for Friday, November 6, at the Petroleum Club. Individual tickets are $65 for non members and $50 for members. Tickets include a tasting glass, tasting and heavy appetizers. I've heard this is a terrific event and all for a good cause: promoting the arts in our community. For more information call 661-324-9000. 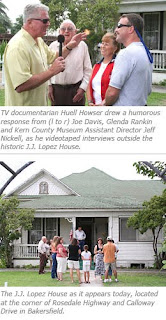 * ... HUELL HEADS BACK TO BAKERSFIELD: Learned the other day that Huell Howser, the folksy and popular host of public television's "California's Gold" series, is heading back to Bakersfield next week. Huell will be filming a followup report on the relocation of the historic Lopez-Hill House to the Kern County Museum. Howser is scheduled to be shooting next Thursday, according to Penelope Birtenstein, who works with the museum Foundation. The original house was built by J.J. Lopez at Chester and California avenues in 1909. Lopez had  worked as a sheepherder at Tejon Ranch and died in 1938. The house was later moved out off Rosedale Highway and now is at home at the museum.


* ... THE BOYS FROM HODEL'S: Had a chance to speak to a luncheon meeting of the Sons in Retirement (SIRs), a group I didn't even know exist before I spent some time with them.  It was an interesting mix of about 100 retired business, educators and professionals who had one thing in common: staying connected with the community via friendly networking over lunch at Hodel's over off Olive Drive. The best of Bakersfield has always been its people, and it was good to spend a couple hours with a group of citizens who chose to stay involved and on the top of issues. My thanks to Lon Kellenberger, retired dean at the School of Education over at Cal State Bakersfield, for the invite, not to mention the free lunch.
Posted by Richard Beene at 9:45 AM

Thank you for your post concerning San Joaquin Bank. In these days immediately following their closing, we need to be asking questions. The hope being that the answers will protect another community institution from following SJ Bank's fate. I sincerely believe, as you hint in the post, that all will be revealed; and for now, we will have to take solace in that.

What is the effects on the SJB employees?

Many people in the community are deeply saddened about the loss of San Joaquin Bank. Good people doing good in the community -- but they were also doing what everyone else in banking was doing, hustling, making loans and trying to make money during the crazy bubble in the past few years. They took calculated risks under the sytem and lost, under the system. But what in the world does your final sentence mean when you say, "When the real story of San Joaquin and the bank closings is told, let's hope it doesn't smack of a new era of McCarthyism"? The tryanny of one senator? Some sort of witch hunt? Aimed against who? Are you saying that there's another reason why the bank failed other than bad loans? Are you saying the government acted more precipitously when closing San Joaquin Bank than when it closed 98 other banks in the United States this year? Shouldn't we be glad that the depositors were protected? If you have any money in the bank, I'm sure you'd be quite glad to see the take over. On the other hand, if you're an investor in the bank, you're probably out of luck (although long-term investors probably have more than made their money out of their investments via dividends).

Regarding Ms. Wolfe and your previous unkind comments from anonymous people about the CSUB woman who fired her? Read Sunday's NYT public editor's column about the use of anonymous sources. It's enlightening.