Short takes around town: Another financial institution on the ropes and Fred Drew is out at the Kern Community Foundation

* ... AND THE DOMINOES BEGIN TO FALL: The news that Kern Schools Federal Credit Union is on the ropes is further evidence of the depth of this recession. The credit union has lost over $54 million since the beginning of last year, a figure that makes the losses at the now shuttered San Joaquin Bank look absolutely paltry. And now we learn the credit union, like the bank, has been put on notice that it must dramatically increase its liquidity or face the consequences. Unlike commercial banks like San Joaquin, which got into trouble on soured development loans, the credit union issues are more consumer based - bad auto loans, delinquent personal loans and the like - and reflect the depths of the recession in Kern County, where our jobless rate is hovering around 14 percent. Another just stunning aspect of all this is the fact that at least one Kern Schools board member, Jim Fillbrandt, told The Californian he was unaware of the demands and written agreement with the National Credit Union Administration until Monday when outgoing CEO Vince Rojas mentioned  it. How and why the board would be left in the dark (if indeed it was) are questions that need to be answered. Looks like Rojas got out just at the right time, handing over the reins to Steve Renock, who previously worked at a credit union in Orange County. Here's hoping Renock is well versed in crisis management, because that's the job he's inherited.

* .... DREW OUT AT FOUNDATION: I learned today that Fred Drew is out as CEO of the Kern Community Foundation. Drew has only been on the job since January. The press release from the Foundation was short and to the point and offered no explanation. But obviously things didn't work out between Drew and the Foundation Board of Directors. Judi McCarthy, the Foundation board chair, issued a press release saying only that Drew and the Board of Directors reached "mutual agreement" that he would leave effective October 31. In the meantime, retired CEO Noel Daniells "has been engaged by the Board to offer continued guidance and assistance" and McCarthy will serve as acting executive until a new CEO is in place. An appreciation dinner was just held for Noel last month at Stockdale Country Club. Looks like he'll stick around longer to help in the transition.

* ... INDUSTRIAL REAL ESTATE REBOUND?: We all know about the funk that residential real estate is in, but what about the commercial and industrial side? I follow the blog of Wayne Kress, a principal over at CB Richard Ellis Bakersfield,  and learned that things are indeed slow but may be showing signs of a rebound. (check out his posting here). Kress said we have recovered a bit from the "lowly performance" of the first and second quarters. Some of the numbers and percentages here are staggering. From his blog: 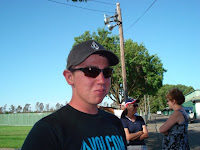 * ... HOT SHOT WINS THE WORLD: Kudos to Bakersfield's Brian Foley, the college freshman who just won the World Championships in skeet shooting. Brian did it by not missing a single target in the 410 bore competition at the World Skeet Shooting Championships in San Antonio, Texas, and then beating perhaps the world's best shooter,  Todd Bender of Atlanta, in a shootoff. Brian graduated from Ridgeview High and is a freshman at Lindenwood University, a private college of about 13,000 students in St. Charles, Mo. He's the son of Tim and Kim Foley of Bakersfield.
Posted by Richard Beene at 3:08 PM