The Padre makes a comeback, more kids coming home and the Foundation launches a CEO search

* ... THE MAGNIFICENT PADRE: For those of us who work downtown, bringing the old Padre Hotel back to its glory days has always been a dream. Old timers recall a time when the Padre was the belle of the ball, a magnificent and elegant venue that was virtually unrivaled in our community. Now that it is being renovated, we're all hoping for a return to the glory days. The other day I got a peek inside as workers were finishing up the lobby. It is stunning. The walls are a deep crimson with hints of maroon, silver-tinned high ceilings, rich dark wood with a long bar at the back. The developers and new head of catering Steve Uricchio promise the Padre will have a grand opening at the end of the year. It looks like it will be worth waiting for.

* ... COMING HOME AND GIVING THANKS: Some more names came my way of local kids who went off to school and eventually decided to call Bakersfield home.  Dr. Mark Schamblin graduated from Highland High School and went on to Pepperdine, St. Louis University and UC Irvine and is now a sports medicine orthopedist with Southern California Orthopedic Institute. Also graduating from Highland was Dr. Jill Schamblin Petrini, a Cal State Fresno bulldog who is now a speech pathologist at Laurelglen Elementary. And finally there is Dr. James Cusator, yet another Highland grad, who went on to Temple University in Pennsylvania and is now a radiologist with Quest Imaging. My thanks to local resident Jean Schamblin for passing along this information.

* ... FOUNDATION SEARCH: It looks like the Kern Community Foundation hopes to have a new CEO identified in early January. At least that's the word from Judi McCarthy, acting CEO and a founding organizer. McCarthy has been playing that role (all unpaid as a volunteer)  since things didn't work out with former CEO Fred Drew. Nobody is talking  about the circumstances under which Drew left the job. The Foundation Board has now "reopened the search" and is working with a professional search firm with a specialty in community foundations. I am told the candidates include people who live both here and outside the community but there is no "inside" preferred candidate. This is an important job for a Foundation that is playing an increasingly important role in our community. In the last 10 years, it has handed out $5.5 million in grants. If an offer is made in January, the new CEO will be coming on board in February depending on if there is a move involved. More on this as it develops. 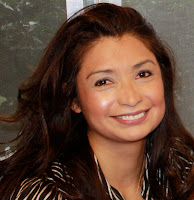 * ... OLIVIA GARCIA RECOGNIZED: I couldn't be prouder of my colleague Olivia Garcia, the Californian's vice president of content, who has been honored as one of the "Luminarias of HOPE" for 2010. The Luminarias are women that represent the spirit of Latina leadership in their communities by guiding positive change toward parity for all. They will be honored at HOPE's 20th Anniversary Dinner along with Spirit of Hope Honoree U.S. Treasurer Rosie Rios and Ray of HOPE Honoree Alliance for a Better Community. In addition to Olivia, the Luminarias are: Nellie Andrade, Past President of MANA de San Diego, Teresa Alvarado, Co-Founder of Latina Coalition of Silicon Valley, and Ofelia Valdez-Yeager, Co-Chair of Latina Women's Forum of Riverside County. Olivia is married to Julio Garcia, a sheriff's deputy, and they have four boys: Diego, Mateo, Joaquin and Cruz.
Posted by Richard Beene at 9:05 AM

As the doting auntie of one of the fine Bakersfield returnees you've listed lately, I wonder if you might consider adding a list to your blog alongside the brain drain list and call it something like brain gain??? Just a thought!!!