* ... A FEW MORE WHO CAME HOME: I received some nice followup emails from folks reminding me of yet more local kids who went away to college but decided to come home to Bakersfield. This is an ongoing debate in our community as we struggle to provide the kinds of rich and diverse job opportunities that attract young people. Darlyn Baker, co-owner of Interim HealthCare, put on her proud mother hat to tell me her son Bryon graduated from Dartmouth College in 1996 and returned to join the family business. Her daughter, Heather, attended Cal State Bakersfield and graduated from UC Riverside (PhD in statistics), worked in San Diego and is now a stay at home mom here in town. Heather's husband, Kevin Crosby, is another local product who got his master's degree from Chapman University in Orange County and is now teaching at the Sunset school in Lamont. All three are Highland High graduates. And finally, there is Dustin Kilpatrick, son of independent oil consultant Dave Kilpatrick and wife Danielle, who is working at a local engineering firm after graduating from USC. Dustin comes from a USC family. His parents are Trojans as is his brother Daniel.

* ... CSUB GIVES UCLA A RUN: What a thrill is was to see the Cal State men's basketball team take on UCLA at Pauley Pavilion on regional television Friday night (Fox Sports West). As expected they lost, but not before giving the Bruins a run in the first half. CSUB's move to Division 1 athletic status has not come without opposition, but it's hard to deny that this kind of exposure helps by putting the school on a national stage.

* ... JUNIOR LEAGUE FUND RAISER: Had a chance to stop by "Wine Fest"Saturday night, the big Junior League fund raiser held each year at the Kern County Fairgrounds. This was another sold out evening, some 750 tickets and featuring 22 wineries and 18 local restaurants along with a silent auction. Tracy Walker Kiser, owner of H. Walker's men's clothing and a Junior League officer, told me the group raises about $100,000 each that it passes along to local charities. Other Junior League officers working the room included Katie Kirschenmann, Penny Rafferty, Lydia Rowles and Melissa Grayhek among others. 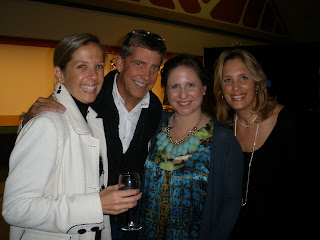 * ... MERCY CELEBRATES A BIRTHDAY:  I heard from Stephanie Weber that Mercy Hospital is preparing for its 100th anniversary next February 19th. Stephanie is executive director of the Friends of Mercy Foundation and says the year-long celebration will feature stories about the hospital's role in our community. In her words:

"It was on that date in 1910 that four Sisters of Mercy from the order boarded a train and traveled to to take over the administration of the St. Clair Hospital; a private residence that had been converted to a 25-bed hospital.  The four sisters were hesitant to come, but when they got here they were warmly welcomed by the pastor of St. Francis Church and several parishioners.  They quickly became immersed in the community and it was a wealthy parishioner that gave them $41,000 to construct what would become a new hospital, named – on the site where our current Truxtun campus currently resides.  And, the Sisters of Mercy also started the school at St. Francis that same year, so Mercy and both turn 100 in 2010."

Posted by Richard Beene at 8:11 AM