* ... CALIFORNIA BRAIN DRAIN? Here's something new to consider: the high cost of living in California and the rising cost of a university education is leading to a statewide "brain drain" of college kids out of our state. That's the conclusion of  "The Capitol Weekly" that said for the first time since the 1980s, California sent more college kids out of state than it received from other states. This is amazing stuff and points to the  increasing cost of a California bachelor's degree combined with other factors like state and local taxes and housing costs that are sending kids elsewhere. Read the entire story here but consider this excerpt:

" ... the state has registered a net loss of college graduates annually for many years. Whether this is attributable to cost of living or other factors, the fact remains that the state is subsidizing the education of people who contribute to another state’s economy. The ideal situation ... is to recruit people who do most of their schooling elsewhere, come to California for college or graduate school, then stay and join the workforce."
"Nevertheless, public higher education in California is still on course to produce slightly fewer graduates, with somewhat more debt, in the coming years. And these things are happening at a time when the state needs more graduates. 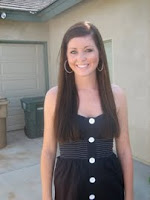 * ... PRAYERS FOR  A LOCAL KID: I was shocked to learn this weekend that Macey Kibbee, a local Bakersfield girl now attending Cal State Long Beach, was in a horrific accident and is hospitalized in critical condition. Macey, a sophomore at Long Beach, was jogging last Thursday afternoon when she was stuck by a car and thrown onto the windshield. Family members say there was serious swelling of the brain and that she was put into a medically induced coma, but she is (hopefully) now showing signs that the worst may be over and at least once responded to verbal commands. This is every parent's nightmare and a scenario that you simply cannot allow yourself to imagine once you send your youngster off to school.  (Follow her recovery on the family blog here) Macey graduated from Stockdale High School in 2008 and was part of a large group of high achieving, good kids that included my own daughter. She is one of a number of local kids who are attending Long Beach State, a popular state university that draws heavily from the Central  Valley. She is now surrounded by family and friends at Long Beach Memorial Hospital.


* ... TWO MORE WHO CAME HOME: I heard from Carol Dokolos who added her two sons to the long list of local kids who went off to college and later home to contribute to our community. Nick Dokolos is a North High graduate who earned his teaching credential at Biola University and is now teaching at Columbia Elementary  School. Brother Marcus Dokolos is also a North High grad, majoring in engineering at beautiful Westmont College and is now working for Porter and Associates Engineering. Nick is also the person behind the local Segway rentals this Christmas, having done something similar in Door County, Wisconsin, during the summers.

* ... ANOTHER FIRST FRIDAY: You missed something special if you didn't attend the "First Friday" celebrations downtown. The weather was crisp, hundreds of folks were milling about listening to outdoor concerts and checking out the art galleries, and the atmosphere was electric. These downtown events keep getting better and are at their best in a fall evening in scarf and sweater weather. Don Martin's Metro Galleries was packed and the hors d'oeuvres provided by the new sushi restaurant Enso on 19th Street were superb. Downtown has certainly had its issues and bad publicity in recent years, and deservedly so, but its revival is worth our support. I saw many local folks there, including former Weill Institute head Jeff Johnson, local artist Barbara Reid, attorney David Cohn and wife Debby, oil engineer Bob Ellison and wife Patricia of Southwest Bakersfield, local artist Chalita Robinson and many more.
Posted by Richard Beene at 10:20 AM

Thank you for bringing the Macey Kibbee accident to our attention. Many are now in deep prayer for her whole recovery. May all aware Californians unify in a spirit of sacrificial support for Macey and her family!

My thoughts are with this poor girl. Pray for her family.