McCarthy: it's all about jobs, water for the Valley and sensible healthcare reform

It's time for the weekly update from Rep. Kevin McCarthy, R-Bakersfield. His report from Capitol Hill 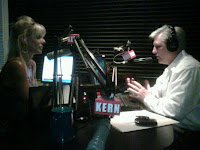 "As we all know, our local economy is directly impacted by a lack of water as we see cropland dry and fallow.  On Wednesday, the California State Water Project announced its water allocation for 2010 would be the lowest in its history. Congressman Nunes (Tulare) and I are trying to get Congress to turn on the pumps and bring needed water to the Central Valley. This time we are using a discharge petition to force a straight up or down vote on our bill to waive regulatory burdens that restrict Delta water pumping, which would restore California water flow.
"During these challenging economic times that test our country’s resolve, a book I have been recommending for a historical perspective is “The Forgotten Man” by Amity Shales.  The book describes the struggles of spending programs not reaching the common American person – the book highlights the forgotten man.  Today’s scenarios involving government intervention and economic challenges we face are similar and there are lessons from this book to get our country back on track.

"Today’s record deficits and double-digit unemployment are unacceptable. The trillion dollar stimulus has failed to create the jobs that were promised. Our families are struggling, and we all have our own stories of the effects. Whether it is a neighbor or family member who has been laid off or someone we know losing their home, the effects are real.   My colleagues and I have crafted common-sense job creating policies that should be revisited.  Just this week, my friend and colleague Eric Cantor unveiled a no-cost stimulus that will make needed changes to help American businesses create jobs.

"In addition to ideological bills like cap and trade that will kill American jobs, this week the Senate debate began over the Democrats’ government takeover of healthcare (H.R. 3590).  This bill could create a government-run healthcare plan that could cause as many as 114 million Americans to lose their current coverage, while raising taxes on small businesses to pay for the trillions in spending. I will continue to fight to ensure this bill does not become law.

"Tuesday evening President Obama also addressed the nation with his plan to send an additional 30,000 troops to Afghanistan.  The President finally decided to support General McChrystal’s request to reinforce our troops and commit to the counterinsurgency strategy he laid out in April.  Whenever a tough decision is necessary to send our troops into harm’s way, I believe we must ensure our goals are clear, our strategies can work, and most of all, our troops have the resources they need to succeed.

"Lastly, I hope many of you were able to attend the Earl Warren Cup at Bakersfield High School. Unfortunately, I was unable to be there, but I was able to record and send in a few questions for the contestants.  Congratulations to winner, Wesley Elrich, his classmates, and government teacher Jeremy Adams for all his hard work to promote enthusiasm for constitutional knowledge.

Posted by Richard Beene at 4:22 PM