* ... MACEY KIBBEE'S RECOVERY: I've been following the slow recovery of Macey Kibbee, one of our local girls who was gravely injured when she was hit by a car while jogging in Long Beach. (read the previous post here). Macey, who graduated from Stockdale High two years ago, is a sophomore at Long Beach State. The accident, which happened around dusk several weeks ago, has left her with brain injuries but the family says there is reason for optimism. To check out her progress, go to the family blogsite here. Since the accident, a steady stream of friends and well wishers have visited her at Long Beach Memorial. The details of exactly what caused the accident are not clear, and the emphasis now is on her recovery. Her long term prognosis remains uncertain, but she is talking and has regained movement of her body since coming out of a drug-induced coma. Keep Macey and the Kibbee family in your thoughts. 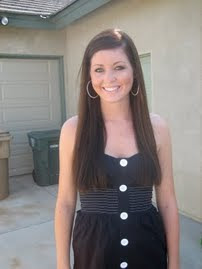 * ... AND THE KIDS COME HOME: The tragedy of Macey is a cautionary reminder for all the families and children on the move this Christmas. College holiday breaks began this week for most schools, and the local kids will be arriving for their annual pilgrimages to Luigi's, Woolgrower's, the 24th Street Cafe, Uricchios and all their  favorite haunts. Hats off to so many of our local retailers who have opened their payrolls to hire some of these kids part-time over the holidays. It keeps them busy, out of trouble and provides them with a few bucks to take back to school. Let's hope this holiday is a safe one for everyone traveling and on the road.

* ... THE CLARKS OF BAKERSFIELD: Matt Clark, one of the young lawyers at Chainlaw, reminded me that both he and his wife Molly are among the growing list of folks who went away to school and then returned. Matt went to Garces Memorial, graduated from Loyola Marymount and then McGeorge law school. Molly went to Bakersfield High and earned her B.A. from Cal State Bakersfield. They lived in Sacramento before deciding to head home. Michael Clark, Matt's father, was a North High grad who went off to UCLA and Stanford, only to return with his wife, Norleen Clark, who graduated from BHS and then went onto San Diego State. Finally, Matt's sister is Amanda Meszaros (Clark), a BHS Driller who went off to Rutgers and Sacramento State who has since returned to Bakersfield as a special education teacher in the Panama Buena Vista School District. As if that were not enough, Matt added that his "good buddy Jeff Giumarra" went to BHS and then to Claremont McKenna College, returning to work for his family business. Lastly, Matt said another of his friends is Chris Ruppel, a West High graduate who graduated from New Mexico State but is back in town. That's quite a list. My thanks to Matt for submitting it to BakersfieldObserved.

* ... RIP SHIRLEY FIDDLER: I was saddened to hear about the death of Shirley Ann Fiddler, a longtime Bakersfield resident and wife of retired oil engineer Claude Fiddler. Shirley was active in the community and a regular guest at the downtown Rotary Club where Claude served as president. (They were married in 1955) I am always impressed by breadth of experience and travel seen in the obituaries of folks in the oil industry, and Shirley's did not disappoint. Working for Chevron, the Fiddlers lived everywhere from Hong Kong to Madagascar, Perth, Australia, Paris and Taft before ending up in Bakersfield where both Shirley and Claude threw themselves into the community. Services will be held Thursday, Dec. 17 at Greenlawn Mortuary. In lieu of flowers, the family requested donations to the local SPCA.

Why use "RIP" when someone has died? It is horrible, so weirdly from the old west. a gunfighter's wooden gravemarker's epitaph, or something on the back of a Bakersfield pick-up truck window paying homage to a friend killed in a car wreck. Would it hurt to spell out "Rest in Peace"? Here's a lovely elderly woman and it reads "RIP." How tasteless.

Some of the "Anonymous" comments people leave on your blog have to make you shake your head Richard.If people feel so strongly about something why can't they use their real names."Anonymous" ...so weirdly used by the insecure.
LOL oh..sorry..Lauging-out-loud..

ps...I enjoyed reading your tribute to Shirley Fiddler, what a lady! May she RIP.

Thank you Rachel... I have a few commenters whose anger is visceral but they deserve to be heard... just happy they are reading.

The opinion of a small-town radio show host who can't spell or punctuate ("...shake your head Richard" and "feel strongly about something why can't they use their real names..." or "lauging-out-loud" [sic]) is probably worth a whole lot, too. LOL!