* ... A RAINY NIGHT IN BAKO: There were nothing but rave reviews for the Thursday opening of the new exhibit on homelessness and loss at the Bakersfield Museum of Art. A steady crowd braved the rain to see what may be one of the best shows ever at the local museum, thanks to the stunningly sober photographs of Felix Adamo and  the art of Joe Brubaker. Kudos go to curator Emily Falke and many sponsors (among them George and Marcia Giumarra) for bringing together such a diverse group of artists under a theme "From Hobos to Street People" that seems disturbingly relevant these days. Many in the crowd also took in the Aids Quilt exhibit at the Metro Galleries, another sober and impressive display. These shows always draw a diverse crowd, and among those I spotted were Dr. Javier and Laurie Bustamante, who showed up with their daughter Natalie, a Notre Dame grad now working in labor law at Klein DeNatale Goldner. Also seen were CSUB professor Judith Pratt, former school superintendent Larry Reider and wife Sandy, Sheryl and Lou Barbich, Dr. Chris Hamilton and wife Susan, Bart and Napier Hill, Pat and Terri Collins, Rogers and Esther Brandon, local artist Barbara Reid, Rod and Susan Hersberger, Wendy Wayne and Gene Tackett, MaryLee and Phil Zander and Stan and Ginny Eschner. The exhibit runs through February 21 and  the museum is located at 1931 R Street. Make sure to check it out. (One of the Felix Adamo pictures is below) 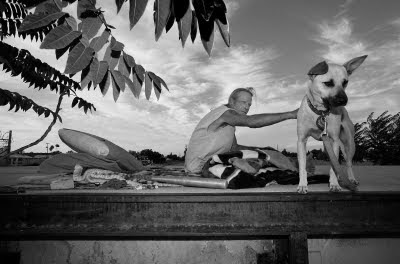 * ... AERA BRINGS ON LOCAL KID: Craig Lincoln, the construction manager over at Jaco Oil Co., dropped me a note to let me know that his son Chase Lincoln is now working in the information technology department at Aera Energy. Chase spent four years at San Jose State University and returned to CSUB to earn a masters in information services. Meanwhile his daughter Stevi, one of the mainstays on the Stockdale High School winning girl's tennis team, is at Bakersfield College and hopes to become a registered nurse.


* ... ADD ANOTHER TO THE LIST: Sandi Souza adds her daughter, Wendi Warren Wanner, to the list of local kids who left and now call Bakersfield home. Wendi graduated from Bakersfield High School, went on to San Jose State University, interned in San Diego and returned to Bako as an occupational therapist. She is currently the director of pediatrics at Terrio Therapy-Fitness, Inc.

* ... ADD TWO CULHANES TO THE LIST: Finally, Holly Culhane, owner of PAS Associates, said she "couldn't resist" to add her two kids to the list. First there is son Tim, a Stockdale High grad who earned a degree in business from Colorado Christian University and is now working with Fleet Card Fuels. Tim's sister Dana is a history major from Eastern University who is now press secretary for state Rep. Jean Fuller. Proud mom Holly couldn't resist by adding that another benefit of having your kids come home is when they bring a spouse, as Tim did. So welcome Holly's daughter-in-law Lindsay, a Point Loma Nazarene graduate and now a personal banker at Citibank.

I went to the museum opening and agree it was a wonderful event. Make sure you thank all the sponsors. There were so many. And thank you for highlighting our local children. I enjoy reading about them.