* ... YOUNG ENTREPRENEURS: The long-term success of any city depends on young entrepreneurs who bring their energy and creativity to the local business scene, often seeing opportunity in midtown areas where others see capital risk. That's why it was so nice to hear from Yvonne Cavanagh, who along with Vikki Cruz owns and runs The Surface Gallery art studio at 1703 20th Street. The Surface Gallery is part of the downtown renaissance and emerging "art district" surrounding the historic Fox Theater. Yvonne told me Surface Gallery will feature photos of the historic Padre Hotel taken by Felix Adamo at the First Friday celebrations set for Feb. 5. Adamo is a longtime Californian photographer who has documented our community in stunning artwork for years. The Adamo show will coincide with the reopening of the old Padre Hotel, at least the new restaurants and bars. I asked Yvonne to tell me something about herself. In her words: 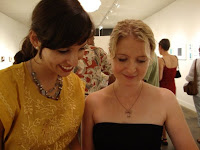 "I graduated from Bakersfield High in 1997 (where I have now taught for 7 years)! I never thought I would teach at the very high school I attended. I then when to BC for two years and then off to San Francisco State graduating in 2002. I returned and earned my credential and then my MA in Education from La Verne in 2009.  My business partner Vikki Cruz went to Garces then BC then graduated from Berkeley in 2002.  Even though we have a lot in common including our close birthdays (mine is Dec. 25th and hers Dec. 23rd), we didn't meet until 2008 when we opened Surface Gallery. We wanted to be a part of the Arts District and thought of no better spot to open Surface than downtown. "

Wish these young entrepreneurs well in 2010. (photo is of Vikki Cruz on left and Yvonne Cavanagh on right, courtesy of Yvonne's Facebook page)

* ... HE SWORE HE'D NEVER RETURN: Joel Young, who wrote me earlier how Bakersfield can grow on you like an ugly dog, shared his own story on his circuitous route home. Said Joel:
"I came to Bako in 1976 at the age of five. Left to go to school at Washington State University in 1993.  My future wife, born and raised in Bako, followed me to WSU in 1994. We moved to LA after school in 1998.  Moved back to Bako in 2002 to raise our family. We swore that we would never come back, yet here we are.  Despite the poor air quality and sweltering summers, it is a great place to raise a family."

* ...  MACEY HOMEWARD BOUND: I was happy to hear that Macey Kibbee, the college sophomore at Long Beach State who was critically injured in a car-pedestrian accident earlier this month, will be heading home in a week or so. I have been following the 19-year-old's amazing recovery from traumatic brain injuries on the family blog (read the latest post here). Macey was hit by a car while jogging in Long Beach and has been at Long Beach Memorial ever since. When she comes home, she'll face a long rehabilitation at the Centre for Neuro Skills in Bakersfield, which has mended many of our young people over the years. Here's to a fast recovery and a wonderful 2010 for this former Stockdale High School Mustang.

* ... HAPPY NEW YEAR: I view 2009 a bit like the uninvited guests who came for a weekend and stayed a month. By the time they leave, you've grown so weary you never want to see them again. Besides the dismal economy - and it will eventually recover, if not this year then next - I know far too many people who have encountered personal crises of health, family, relationships or employment. So let's all take a deep breath and take a moment to appreciate all the blessings we do have. My warmest wishes to everyone for a prosperous 2010, and let's never lose sight of what is really important and where we all derive our strength and purpose. Onward.
Posted by Richard Beene at 9:49 AM