* ... THE PADRE: I meandered into the Padre Hotel the other night and happened to meet Brett Miller, one of the partner owners. Miller was busy with last minute details preparing for the opening but was kind enough to show me around. The main lobby interior, with its long oak bar with multiple flat screen TVs overhead, will leave you breathless. These guys have done a remarkable job with the old place. There are four different restaurants and they all should be open sometime next month. Now with that said, as much as everyone is cheering the continued revival of downtown, the Padre reopening is making some people nervous. They might not say it on the record, but other local downtown restaurants are worrying that the Padre's eateries could hurt their own businesses, which thrive off the emerging arts scene. The question is whether a successful Padre will serve as a tide that lifts all boats, or a tsunami that will sink others. All that depends, of course, on the Padre restaurants following through with good food, service and pricing, and none of that is a given. Just ask anyone in the food business.

* ... SCRIVNER FUND RAISER: The first event at the new Padre was a fund raiser for Zack Scrivner, the Republican city councilman who is running for county supervisor. I'm told the Padre was a huge hit as the supporters gathered on the main lobby floor, munched hors d'ouerves and gazed at the tiled lobby and new trimmings. One of those attending was Don Martin, owner of Metro Galleries, who was particularly  impressed with the Padre lighting. "Lights embedded in floors shine up on the columns that have been restored," he said. "All the furniture is custom made for the hotel, along with the art and wallpaper." All the local Republican big-wigs (and others) were there, including Rep. Kevin McCarthy and former Congressman Bill Thomas, as well as Assemblywoman Jean Fuller. Also attending were Karen Dewalt, Jan Bans, Jacquie Sullivan and David Couch among others. (photo courtesy of Don Martin) 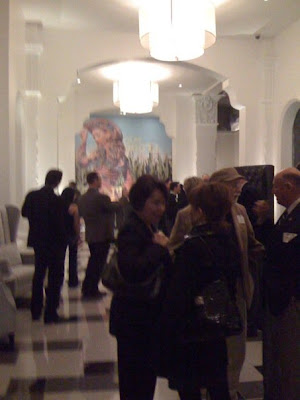 * ... STIMULUS MONEY: A Bakersfield-based company has landed a $1.6 million contract to fund emergency drought relief  for affected agricultural areas of California. That's the word from the Bureau of Reclamation (part of the Department of Interior) who said Western Oilfields Supply Co. of Bakersfield would supply pumps, valves, flow meters and piping to "increase the flexibility of limited water supplies for helping maintain production of trees and vines." The contract comes from the American recovery and Reinvestment Act, part of President Obama's overall stimulus package.

* ... GO BLUE: Another Wolverine from the University of Michigan wrote to pledge his allegiance to Ann Arbor. George Granger said he grew up in Michigan, graduated from the university in 1953 and from the university law school in 1957. He came to Kern County in 1960 and has practiced law here - and in Delano - for 50 years. Well done, George.


* ... B-TOWN NOT BAKO: Karene R. Williams sent me an email saying she lived in Bakersfield from 1955 to 1973 and was in the first graduating class from South High School. She now lives in Lake Isabella. Her family has always referred to Bakersfield as "B-town," not Bako.
Posted by Richard Beene at 9:56 AM

My name is Edna Clark Hunton and I was born and raised in Wasco. My friends and I have always referred to Bakersfield as B-town. Even now when I am in Bakersfield and filling out a form and they ask where you live (city) I always put B-town and then my zip. Love your column.

If you really want good stuff for your column, you should put out a call for USC graduates. There are many here in Bakersfield. Fight on!